In today’s job-hopping corporate environment, remaining with the same employer for 40 years is an anomaly. But in early 2020, Rick Thibodeau, print manager at MaineGeneral Health, celebrated a four-decade milestone at the healthcare in-plant he runs in the Pine Tree State.

It was 40 years ago, after completing a two-year graphic arts program at Capital Area Technical Center in Augusta, Maine, that Thibodeau’s graphic arts career began when he took a job in the in-plant at his local hospital, Augusta General Hospital, as a print shop assistant.

“My first day on the job, I walked into the pressroom and there was a big billow of pipe smoke,” Thibodeau recounts. “I can still smell the apple pipe tobacco the print shop manager was smoking. With it being a hospital environment, it seems so crazy now.”

When Thibodeau began his career with MaineGeneral Health in 1980, the shop was producing jobs on an A.B. Dick 360 offset press.

“So much has changed since then,” he says, nostalgically.

One of the biggest changes happened in February 2020 when the in-plant relocated to a new 3,000-sq.-ft. facility, nearly doubling the shop’s footprint. Prior to the move, the in-plant was in the basement of an aging hospital building for 35 years. As the long-standing location began to fall into disrepair, an upgrade was inevitable.

The relocation involved a refresh of the shop’s digital printing equipment and an expansion of the wide-format printing area, including the installation of an air flow system.

Digital print production is now handled by a pair of Canon imagePRESS C910s and a Canon imageRUNNER ADVANCE 8505i. The shop also boasts a two-color Hamada RS34 and two A.B. Dick 9870 offset presses.

“That has just exploded for us,” Thibodeau confides, noting that wide-format cling signage produced by the shop even caught the eye of hospital inspectors during a recent visit.

“They wanted to know what they were made of so they could tell other hospitals about it,” he says.

The shop’s new facility is on the grounds of the Thayer Center for Health in Waterville, Maine, which will help make print deliveries more efficient.

“We are on the same campus as one of our main customers,” Thibodeau explains. “Now we are shipping basically across the parking lot.”

While the in-plant only has two full-time employees other than Thibodeau, it runs two shifts to accommodate the print needs of MaineGeneral Health’s patients and the medical staff. The shop also gets occasional production help from hospital volunteers for work such as hand binding projects.

And even though Thibodeau has been with the in-plant for 40 years, he has, somewhat remarkably, only worked with four other in-plant employees in all that time — and two of the four remain employed at the shop.

“It’s a very interesting job, and I think that is what keeps people in the printing industry,” he contends. “The culture here from the president on down is remarkable. Everyone has each other’s backs.”

Thibodeau adds that the hospital administration has been very encouraging and allowed him to travel to many industry conferences and trade shows over the years. He credits this industry involvement for allowing him to keep up with the latest trends and technology.

“They don’t just support me in gathering information about new technology, they also help me enact those things,” he lauds. “They always seem to find a way to make things happen. We have been very fortunate with the support we have.”

“We have been supported so well over the years,” Thibodeau continues. “We have had great support from all the administrative staff and directors. They want the printing done here — it seems like it is a no-brainer to them.”

Thibodeau recalls MaineGeneral Health going through a reorganization back in the 1990s which uncovered what was really being spent for outsourced printing that didn’t go through the in-plant.

“It was an eye-opener,” Thibodeau says, noting that print spending at just one hospital in 1997 was more than the entire budget of the in-plant today. Nearly all work is now printed in-house, he says, and what little is outsourced goes through the in-plant for competitive bidding to local printers. Thanks to Thibodeau’s wealth of experience, he’s been able to save MaineGeneral a lot of money in procurement costs. 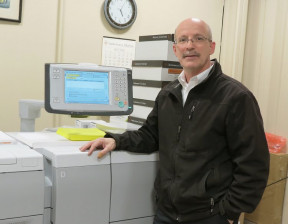 Thibodeau remembers getting a price quote for a previously outsourced 90,000-run periodical job that was so low his customer at the time dismissed it, claiming that the printer must not have understood the details of the project.

“It was half the price the customer previously was paying,” he confides. “It turns out it was probably printed at the same plant, too. Since then, they know the best thing to do is to go to the people that know the business.”

Thibodeau notes that the shop is also the organization’s gatekeeper for brand standards including copyright material and barcode assignment and processing.

Outside of printing, Thibodeau has enjoyed a lifelong interest in flying and aviation. He has taken flight lessons over the years and even decorated his workspace with aviation and airplane memorabilia. Thibodeau also enjoys being a DJ at weddings and social events, and has served as an audio engineer for large music festivals.

He stresses that a work-life balance is also important and credits his wife Mary with being very supportive. Thibodeau points to time spent with the couple’s three granddaughters — Micayla, Erin, and Hailey — as a highlight of his time away from the shop.

As of now, Thibodeau has no plans to retire, and he expects to hit 50 years with MaineGeneral Heath.

“When I take a day off and watch daytime television, I think I’d rather be working,” he concludes with a laugh. “I can’t really imagine retiring.”