A Matter of Scale: Wide-format Printing for the Hospitality Segment 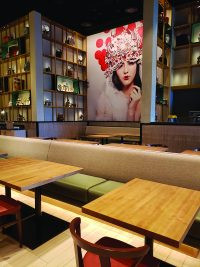 In the printed sense, wide-format printing produced for the hospitality segment is not that much different from the work done for, say, the retail segment. The technologies used are often the same, and the end products often require similar materials and finishing steps. Even the images — which are comprised of a mix of messaging and decoration — may, to the outsider, look much the same. What is truly different about the hospitality segment is instead the project management involved, the logistics of putting printed elements where they belong, and the person or entity a company might work with during the course of the job.

Serving the hospitality segment to the extent of its possibility is a matter of scale. According to Brian Hite, CSO, principal, and co-founder at Image Options (Lake Forest, California), many wide-format producers serve hospitality in some way. For example, they might produce and install a wall mural for a local café. But that’s a “one off.” Other companies, like Image Options, work with the hospitality market at a much higher level.

A Different Way of Working

Hite says that much of the work his company does in the hospitality space starts when it engages with the general contractor overseeing the construction or renovation of a hospitality-focused space. Once drawn into the larger segment, he says, producers serving it will discover people in unique positions — for example, hotel chains often have art consultants, who focus on suite or hallway art. They may also encounter new lingo or needed skills. This can include the use and understanding of floor plans, elevations, and sitemarks, which define the height and size of elements in specific locations.

Hite says while the wide-format-focused media often highlight the possibilities of “environmental design,” which could be loosely defined as printed elements that provide decoration or “mood” in hospitality, corporate, or institutional spaces, realizing those possibilities on a larger scale can be quite complicated.

“The challenge,” he says, “is that companies not familiar with it will price it like other wide-format work, not realizing the project may take three or four months to complete, and one full-time person will be needed to service the job.”

The more deeply a company finds itself within a larger project, Hite says, the more complicated it will be to operate. “If you’re just doing the prints for, say, 500 guest room images, and someone else is managing the project, that’s discrete.” He adds that as interior work becomes more involved, successful completion of large hospitality jobs can require a massive amount of “time above and beyond.” He reports that print cost is only a tiny portion of the larger project cost. Being part of a larger project, he says, can include acquiring licenses, managing contracts, and taking out liens against the ultimate customer in case the contractor “disappears or doesn’t pay.”

With a quarter of a century of experience in serving the hospitality sector, says Charlie Rueb of the display division at Rainier Industries (Tukwila, Washington), the company has worked on a variety of hotel and restaurant projects. As one of the last original vendors for Starbucks, Rainier Industries has overseen the production and installation of interior elements in many of the company’s U.S. locations. This includes items such as wall coverings, window graphics, and dimensional décor. He says that while much of the work for Starbucks has used “boilerplate” imagery, work for another national chain, MOD Pizza, uses a visually regionalized approach.

One of the key features for graphics produced for the hospitality sector, as compared with retail, is the need for the graphics to last. “The mindset,” Rueb says, “is for permanent or long-term durability.”

Wallcoverings, for instance, whether as decorative murals or wallpaper, are designed to last from renovation to renovation, instead of season to season or sale to sale. He added that in our current COVID age, when the cleaning of surfaces in public space has become much more frequent, and perhaps with more aggressive chemicals, graphics have held up well, without the need for additional or different lamination.

Asked about the challenges of serving the hospitality segment, Rueb says one in particular is gaining reliable dimensions through pre-production site visits, and installing elements once they have been produced. “There’s often a small window of time to get that done, and it can require a lot of night work.” For installation, Rueb says Rainier Industries contracts with “a couple of nationwide graphics installation companies.” For large-scale installation jobs, for instance installing graphics in every suite in a large hotel, he says there may be as many as four lead installers on the project.

Like Image Options, Rainier Industries does a significant amount of work with architects, and their end customer is often the general contractor responsible for the broader project. “Having relationships with general contractors is very important,” says Rueb, who says the company has done a lot of relationship building in that area. In his opinion, Rueb says, companies that find the greatest success in the hospitality segment must possess creative problem-solving skills, nimbleness and speed, and the ability to react quickly in ever-changing environments.

Breadth of the Segment

“Florida is the number one destination in the world for tourism,” says Rich Thompson, president of AdGraphics (Pompano Beach, Florida), “so hospitality is big here.” That means his company’s focus on the hospitality segment brings a lot of variety, and includes hotels, restaurants, special events, theme parks, and even cruise ships.

Describing how he sees serving hospitality as being different than retail, Thompson says he finds retailers “have more of a plan,” while hospitality jobs “seem to be more last minute.” In his years serving hospitality, he says he’s worked with his share of facilities managers and general contractors — noting AdGraphics will work with whoever is overseeing the job. “There’s not one avenue that it comes from,” he says.

To illustrate the requirements of working fully with the hospitality industry, Thompson shared a couple of examples of how doing the job is so much more than the in-house production (important as it may be). It also includes a great deal of logistical management: organizing installation teams, scheduling, and ensuring printed pieces arrive on time. On cruise ships, he says, his company has been doing a lot of decorative work aboard vessels to “spruce them up.” During COVID, when cruises just weren’t happening, cruise companies, he says, “saw a strong opportunity to rebrand.” To do so, installation crews were flown by helicopter to the work site, as the ships were not docked in-port, but were instead sitting off-shore. In addition to printing and installing interior decorative elements for cruise ships, AdGraphics has also addressed exterior elements of the ships, including massive installations on the ships’ hulls — a unique physical and logistical challenge.

Another example: Thompson says his company has worked extensively with many of Florida’s best-known and lesser-known theme parks. One unique challenge is that “work needs to take place outside of guest hours. When the park opens, everything needs to be pristine,” he says. Weather can also be a factor with theme-park work, which may include extensive exterior features: “You have to finish what you start.” Further, Thompson says hospitality focused work can fluctuate based on what’s going on with specific companies. Examples include the Super Bowl or the ongoing celebration of Disney World’s 50th anniversary.

While much can be drawn from the experience of the companies profiled here, there is one key takeaway that applies to each. These companies have set out to serve the hospitality segment on a much larger scale than the “onesy-twosy” approach practiced by the majority of graphics producers, who have not made the decision to focus specifically on the hospitality space. It is the companies who make that commitment, and then develop specific skills and specialized knowledge, that become part of a smaller group of companies that compete for work that is more complex to manage, and more lucrative in result. In so doing, they may escape the competition inherent to less specialized, more commoditized work.