Though it recently installed a five-color RMGT 940 offset press, University of Missouri-Columbia Print & Mail Services has not neglected the toner side of its business. It recently upgraded its digital presses to streamline production of its shorter-run jobs.

In 2019, the University of Missouri-Columbia (MU) Print & Mail Services was in the market for an offset upgrade. The in-plant eventually decided on and installed a five-color RMGT 940 press with LED-UV coating and curing. The new press was a boon for production efficiency, slashing hour-long makereadies to just 15 minutes and providing instant curing with the addition of LED-UV.

But Director Jeff McNeeley was a man on a productivity mission, and that mission was far from over. While major volumes pass through the offset operation, short-run digital work makes up a substantial portion of the in-plant’s output as well, particularly on the stationery side. With the digital equipment beginning to age, McNeeley set about finding the right replacement solution to streamline the in-plant’s shorter-run jobs. With such a significant offset operation — McNeeley asserted at the time of acquiring the RMGT 940 that offset accounted for 70% of the shop’s revenue — it’s crucial that the digital department runs in efficient harmony with the analog powerhouse.

Xerox had been the in-plant’s digital vendor of choice for years, but it was time to replace the iGen4 that had served MU Print & Mail Services well for so long. For McNeeley, any of the major vendors that bid for his business would have been more than suitable quality wise — what really mattered was service. Having enjoyed great service from Xerox over the years, the in-plant ultimately decided to upgrade the iGen to an Iridesse, and add a Versant 180 as an accompaniment.

“At the end of the day, Xerox came in with the best lease structure and price point, and we already knew what the service was going to be, which is excellent, so that just sealed the deal,” explains McNeeley. “We brokered a really good deal, and we got redundancy in color we never had, as well as in-line finishing.”

That in-line finishing option was an important addition.

“I knew I wanted to add a booklet maker,” he says. “We have a really hefty bindery department, and we’ve always been able to do all that offline. However, like most plants, we’ve undergone consolidation of staffing and shrunk in size, therefore in-line finishing is needed. When we’re doing 100 saddle-stitch booklets I don’t have the resources to take it to the bindery, fold it, stitch it, trim it, and another handful of processes.”

Additional finishing equipment was required to complete some of the core short-run jobs, and the in-plant opted for the Duplo DC-616 for scoring and trimming.

“We do quite a bit of stationery work for the University of Missouri and the entire University of Missouri system, which means a lot of business cards,” McNeeley continues. “They have very low margins because there’s so much handling, so my goal was to figure out how to streamline that product. All the vendors I spoke to recommended something like a Duplo slitter/cutter/creaser to run the business cards through, versus going to a guillotine cutter.”

Web-to-Print On the Way

The in-plant also had its eye on a solution that’s high on the agenda for any print business: Web-to-print. 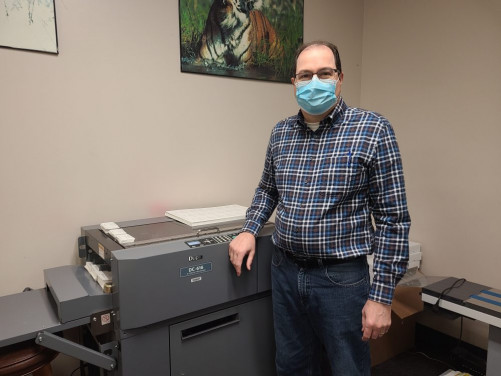 “We evaluated lots of Web-to-print processes, but at the end of the day I really wanted EFI MarketDirect Storefront because that will tie in with our system,” McNeeley explains. “The implementation process hasn’t begun yet, but I’m predicting about three to six months before we go live. We’re hoping it will help a lot in streamlining some of our products as well as allowing us to provide a much better Web presence and user experience.”

Once the Web-to-print solution is up and running, the simplified workflow that McNeeley has been dreaming of will be fully operational.

“We’ll be able to streamline the work orders as they come through on the products we can, like our stationery,” he explains. “We’re hoping to go straight from the Web-to-print to a printable file, skip prepress to just get it printed, and to give the orders mostly automated job tickets. So we’re taking something that was around eight steps, and trying to get it down to about three or four steps.”

This productivity pursuit is all in service to the university, he says, for the benefit of those that use the shop’s services.

“The whole university system will benefit from our updated technology, with digital and offset both recently upgraded,” McNeeley says. “The offset benefits are our closed loop, better color consistency on our runs. With digital, the newer technology has some better color consistency too, as well as in-line finishing and dramatically increased turnaround times, particularly on stationery. We’ll probably shave off two or three days on short-run saddle-stitch booklets by not having to go to the bindery. The quality of output and service, and faster turnaround times, will be hugely beneficial for all departments.”

McNeeley says the next area for improvement is wide-format. The shop has just installed a 64" Roland SOLJET Pro 4 XR-640 Eco-Solvent Inkjet Printer/Cutter.

University of Missouri Ready for Next Challenge