A Printer By the Bay 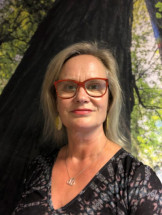 It was a baptism by fire. Just weeks into her new job as assistant manager at the City and County of San Francisco’s ReproMail department, Salla Vaerma-Jadlos was surprised to learn that the manager who just hired her was heading out on a long vacation — for a month.

“I was like, ‘O.K., I’ve got to figure it out now,” recalls Vaerma-Jadlos, her Finnish accent still apparent 29 years after moving to the U.S. But she was confident. “I knew what needed to get done in a print shop.”

It was not the first time her impressive skill set has carried a print shop through stressful times. Her intimate knowledge of how to run a graphic arts business, combined with her innate desire for efficiency has served her well in a career that’s spanned three decades and two continents.

Born in Kouvola, Finland, Vaerma-Jadlos had never given a thought to the printing business until after graduating from high school. With no clear direction in mind, she was receptive when a friend called and told her about a local graphic arts trade school, Porvoon Ammattikoulu. She enrolled and discovered she liked the trade.

“One phone call less and I would be doing totally something else,” she muses.

After graduating from the two-year program, Vaerma-Jadlos took a job doing black-and-white stripping for a car and motorcycle magazine printer named Laakapaino. From there she moved on to a small printing company where she handled everything from design and typesetting to printing and binding.

“I could use all the knowledge that I just had learned from school,” she says. She became invaluable to the company.

Then Vaerma-Jadlos’ life took an unexpected turn while she and a friend hitchhiked through Europe.

“We ran into some American boys, and then, you know, one thing led to another, and before I knew it I was here,” she says, glossing over some details. The “one thing led to another” part of her tale includes a marriage and a brief stint on the East Coast, where she found a job at a print shop in Lyndhurst, N.J., in 1990.

When her husband at the time decided to return to his native San Francisco, she crossed the country with him and started looking for work in the City by the Bay. She walked for miles with her resume, stopping into countless print shops.

It was at a service bureau and print shop called Top Copy Printing, on Market Street. There, she ran the A.B.Dick presses, the camera, and even handled customer service from 1991 to 1993. Juggling so many different tasks forged a self sufficiency in Vaerma-Jadlos, along with a type of personal motto: “Quit whining and get it done.”

Her work ethic caught the attention of her customers, who praised her to others in the business — including the manager of ReproMail for the City and County of San Francisco, David German.

“They were saying that ‘you need to get this person. She’s really good,’” Vaerma-Jadlos recalls. “He called me and said, ‘hey, I have an opening. I would like you to apply.’ That’s how I ended up here.”

“Here” was in the basement of the city’s Beaux-Arts City Hall. She was taken off guard when German left for his month-long vacation soon after she started, but kept the shop running smoothly nonetheless.

In 1995 the in-plant relocated into “temporary” quarters due to refurbishing projects to repair damage from the 1989 Loma Prieta earthquake. Vaerma-Jadlos loathed the new location. “It was a dungeon,” she says. “It was horrific.”

Despite its limitations — the in-plant still ran Itek and A.B.Dick presses, with a Xerox 5090 as the only “new” device — Vaerma-Jadlos was determined to get work out on time and keep customers happy.

“I wanted to just make sure that everything happened right, on time, so I started pushing the efficiencies and the customer service,” she says. “I’m always looking for ways to do things more efficiently. Just because something has been done a certain way in the past, doesn’t mean that’s the best way.”

At times her push for efficiency stood in stark contrast to the way city government functioned, and she had to learn to be patient with all the red tape she encountered.

“I think the biggest challenge is the bureaucracy,” she admits. “It’s hard to just sit tight and say, ‘just wait; they will get it done as fast as they can.’ That’s really challenging.”

Having earned a bachelor’s degree in business management from the University of Phoenix, Vaerma-Jadlos was ready for the next challenge. So when German moved to another department in 2008, she eagerly took on the manager’s role. At the time, Repro­Mail reported to the Department of Technology, and Vaerma-Jadlos was less than happy with the relationship. She was able to get the in-plant repositioned under General Services in 2011, a much better fit, she feels.

After 18 years in its “temporary” facility, ReproMail moved to its current storefront location at 10th and Market in 2013. Though the 10,500-sq.-ft. facility is nicer, it’s too small for Vaerma-Jadlos’ liking.

“Since last year I’ve had money to purchase a big wide-format [flatbed] printer, but I don’t have any place to put it,” she laments.

Still, the move allowed the in-plant to modernize its equipment mix. It got rid of its offset presses and an HP Indigo digital press, and added a Xerox Color 1000. The shop’s digital arsenal has expanded even more since then.

A stickler for cleanliness, Vaerma-Jadlos encourages employees to keep the shop clean.

“I can’t have stuff lying around,” she says. “If you’re going to touch it twice a year, put it in a closet.”

She singles out her emphasis on efficiency and stellar customer service as her key achievements, calling them “the glue that keeps it all together.”

Vaerma-Jadlos is proud of her staff and the great reputation they have helped build throughout San Francisco government.

“We’re a perfect match for the city,” she says. “We get done what needs to get done.”

Customer feedback has been overwhelmingly positive, she says.

“Overall, we’re seen as an asset; as a partner; as somebody who can get things done no matter what the situation is,” she says.

To enhance that, the in-plant is about to launch EFI’s Digital StoreFront Web-to-print system. It will not only improve customer service, but will increase automation and reduce manual touches in the shop — crucial benefits as it becomes more difficult to hire qualified staff.

“I feel excited about it, and I feel that it’s going to be something that hopefully is going to be my legacy for the city when I retire,” she says.

Vaerma-Jadlos also has plans to add satellite locations to serve customers closer to their offices.

Despite her 28 years in the city of San Francisco, Vaerma-Jadlos retains her Nordic affinity for the outdoors. She bicycles five miles to work each day from her home near Golden Gate Park, and enjoys hiking in and around the Bay area.

“I hiked 13 miles on Saturday,” she proclaims.

Solo Acts: The Trials of the One-Person In-plant

Three New Challenges of the New Normal
Reopening Of America: What Will This Look Like For Businesses Across The US
END_OF_DOCUMENT_TOKEN_TO_BE_REPLACED
Upcoming Webinars
Planning Ahead to Address Paper Supply Challenges