For Abbas Badani, the decision to seek out his future in the printing industry happened at a young age, and for simple, practical reasons.

“It seemed like a good small business opportunity,” recalls Badani, director of the Multimedia & Print Center at Pennsylvania State University.

Born in Mumbai, India, Badani graduated from high school in 1978, at which point he was tasked with picking a career direction to guide his future studies. His father, a doctor, felt the printing trade offered some good entrepreneurial opportunities, so the younger Badani signed up at the Government Institute of Printing Technology. As part of the program he worked apprenticeships in both offset and letterpress shops. As if that weren’t enough to keep him busy, Badani also took evening classes at the University of Bombay.

By 1984, he had completed the printing program and earned a BA in accounting. He worked for a year as a press operator at Tata Press, one of Mumbai’s largest printers, but still felt he had more to learn about printing technology.

In pursuit of additional education, Badani applied and got accepted to Florida A&M University’s graphic arts program, and made plans for his first trip to the United States. Those plans went awry, however, when, on the evening of his departure, a family friend’s cautions about crime in the U.S. spooked his mother. She cancelled his plane ticket.

Back on the streets, Badani joined an ad agency for half a year, then took a marketing assistant job for the East Asiatic Co., a major reseller of printing equipment. Eventually he applied to the Rochester Institute of Technology and got accepted. This time he made it to the U.S. where he dug into his studies. With years of work experience, Badani breezed through the program in two years, earning his bachelor’s degree in printing and quality management.

In 1990 he got a job offer from Frederick Printing, in Denver, as a quality manager. He initiated an ISO 9000 quality management program there, back when W. Edward Deming’s Total Quality Management philosophy was the rage. In the evenings, he studied for an MBA in operations management at Regis University.

When management changes at Frederick left him without a job, he went to work as a production manager at National Printing & Packaging. During his time there, he married his wife, Yasmin.

In 1995 Badani faced his next major geographic change, when his former manager at Frederick joined Moore Business Forms in Dallas and offered him a job.

“I was responsible for the offset production facility,” he says.

Over time he moved into Moore’s outsourcing group, where he saw the other side of this contentious in-plant issue. Badani was charged with writing value propositions to help Moore take over the in-plants at health care companies.

In this capacity, Badani made frequent trips to Connecticut, where Moore ran the in-plant for Aetna. His long absences, though, were not ideal for his marriage.

Then two things happened at once. He saw an ad by chance for the in-plant manager position at Texas A&M University. And Moore offered to move him to Connecticut.

Badani applied for the university job, even as he made plans to relocate, not sure which direction he wanted to go. Then, just days before his house went up for sale, “Texas A&M offered me the job,” he says.

Into the In-plant World

In 1999 Badani entered an in-plant that had fallen on hard times. Charged with turning it around, he upgraded the digital printers, worked with procurement to bring work back in-house and began creating an online print portal through which all print orders would flow. In his five years there, he greatly improved the operation and ended up generating a $1.5 million surplus.

But then a major management change at Texas A&M bought in a more pro-outsourcing mindset, and Badani saw the writing on the wall. When he learned of an opening at Penn State’s in-plant in 2004, he applied for and got the director’s job. Eighteen months later, Texas A&M closed its in-plant.

At Penn State, Badani was confronted with an in-plant that had high operating costs, significant debt and equipment that no longer suited its workload. He addressed all those issues head on, slowly retooling, bringing in work that was previously outsourced and reducing the shop’s 100-employee staff to the 50 employees it has today.

“We’ve not laid any people off,” he hastens. “We did it all through attrition.”

He also perfected the print portal he had started at Texas A&M, and launched it in 2006. All vendors, including the in-plant, must bid electronically through the portal, and jobs are awarded according to best value. The portal tracks job status, shows job price history and scores vendors on pricing, service, quality and on-time delivery.

“The portal got us in, because we could start seeing the work, so then we started redesigning the operation to actually fit that work so that we could do it,” he says.

The in-plant’s three biggest customers today — Admissions, Athletics and Annual Giving — sent barely any work to the in-plant prior to the portal, he says. Implementing it earned him major points from the university.

“We’ve reduced costs for all outsourcing buys,” he notes.

Thanks to the changes he made, the in-plant has not lost money in 10 years, he says. 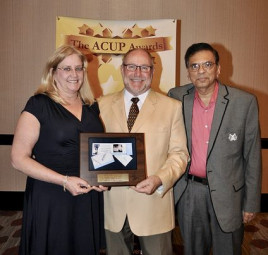 Badani also started a copier program for PSU that now includes 2,400 devices across more than 35 locations in Pennsylvania. In recent years he upgraded the in-plant’s wide-format printing capabilities and added dye-sublimation equipment for printing apparel, caps, tags, coasters and more. Additions like these are driven by one burning question that Badani never stops asking: “How do you get into your organization’s bloodstream so that you can’t be pulled out?”

For example, the in-plant added a Neopost DS-200 folder/inserter in 2016 and began fulfilling new student acceptance packets for Undergraduate Admissions — a job that department previously did by hand. This has drastically reduced the cycle time and won the in-plant great respect.

“The services we provide have had a huge impact,” he declares.

Since he arrived at Penn State, both Badani and the Multimedia & Print Center have been recognized for their efforts. The shop has been honored with In-Print and ACUP awards for the quality of its work. Badani himself has received a NACUMS management award, and earned his Executive Mail Center Manager and Mail Design Professional certifications from the USPS. A Certified Auxiliary Services Professional with the National Association of College Auxiliary Services, he is on the CASP certification board for the eastern region of NACAS. 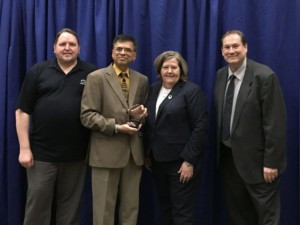 At Penn State, he chairs the Diversity & Inclusion Team for Auxiliary Business Services. He also serves on the Governor’s Advisory Commission on Asian Pacific American Affairs.

Living away from India for so many years has not loosened Badani’s ties to his homeland, which he visits every two years.

“We do have strong, strong connections,” he insists. But after more than 30 years in the U.S., he’s happy where he is.

“This is home,” he affirms.

Badani and his wife love to travel, and with their daughter now attending the University of Texas, he makes frequent visits to Austin, while adjusting to the empty nest at home.

“We’re in the process of finding new things to keep us busy,” he says.

One such project is an effort to work with film distributors to bring more international films to State College, Pa.

Three New Challenges of the New Normal
END_OF_DOCUMENT_TOKEN_TO_BE_REPLACED
Upcoming Webinars
Print Outlook: What to Expect in the Year Ahead