When Chuck Werninger found himself unable to attend the 2017 Association of College and University Printers (ACUP+) conference, it seemed his session on production inkjet printing would have to be scrapped. But after discussions with IPG and ACUP, the manager of Houston Independent School District's in-plant agreed to do a long distance learning session via Skype aided by IPG Editor Bob Neubauer. 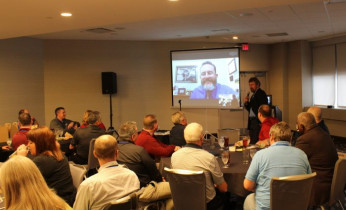 IPG's Bob Neubauer interviews Chuck Werninger via Skype from his office in Houston.

So on the first full day of the conference, as attendees dug into their lunches, they got a crash course in production inkjet printing as Neubauer interviewed Werninger about the new Océ VarioPrint i300 inkjet press his in-plant has been running for nine months now.

Though a number of higher-ed in-plant managers have attended the Inkjet Summit so far — with seven more planning to attend next week's Summit — many still equate inkjet with wide-format rather than the high-speed production devices that are replacing offset presses. Their eyes were opened at ACUP.

Barely an eye dipped to a smartphone the entire session. It may have helped that Werninger's bearded visage loomed, Oz-like, on a screen in front of the room, commanding attention. But also, he had some intriguing things to say. (To listen to a 28-minute portion of this ACUP discussion, scroll to the bottom of this story.)

"We are doing 1,000 two-sided 11x17˝ brochures…from image file to finished brochure in about 12 minutes. No makeready, no color setup, no complex calibration," he proclaimed. "We calibrated on the first day and have not calibrated since."

And all this, he said, for less than a penny a page. "It's really, really affordable."

You need to print some high volumes to justify an inkjet press, he said: At least 1 million 8.5x11˝ images/month. "It's not for the faint of heart," he cautioned.

HISD's in-plant has that volume in student educational materials, which can now be printed affordably in color instead of black-and-white, a change that greatly helps the learning process.

"We're now able to do full-color books that are variable data in nature, and it's at price points that are close to black-and-white production economics," he said. "I'm never going to want to go back to asking customers if black-and-white is OK. We just assume it's in full color."

Werninger acknowledged that inkjet quality is not offset quality, but he questioned how important that really is to customers.

"I think all of us have somehow talked ourselves into thinking that quality is the driving decision-maker for all of our pieces. And certainly for some of our fundraising groups it is a big deal," he said. "But I would ask you, is [offset] carrying its weight? Or is it merely comfortable? Because this i300 for us is allowing us to chart new ground with variable, it's driving cost per images down way into the basement — like literally 1/10 of your current prices — and, long term, our customers, I believe, want volume, and quality is something that we've sort of contrived on our own. I work for a K-12 school district. What we really needed was the pictures to be in color at a price point that we could afford."

To listen to a 28-minute portion of this ACUP discussion, click Play.

Three New Challenges of the New Normal
END_OF_DOCUMENT_TOKEN_TO_BE_REPLACED
Upcoming Webinars
Print Outlook: What to Expect in the Year Ahead