Adding Diversity to the Print Process

Contour cutting adds a new dynamic range to the types of jobs in-plant printers can offer.

When contour cutting as a service first comes to mind, the odds are good it is in relation to a flatbed cutter that operates near-line to the printing presses the in-plant is operating. But roll-fed printer/cutters offer another option, one that allows the shop to eliminate a step in the process while offering a wider range of creative options.

One in-plant that found a roll-fed contour cutting option to be the perfect fit was the grocery store chain Coborn’s Inc., headquartered in Hastings, Minn. The shop purchased a Graphtec FC8600 roll-fed cutting plotter to satisfy a growing need for contour-cut items, which the in-plant’s existing equipment could not provide, notes Paul Wannigman, Print Services and Mailroom manager for the chain. 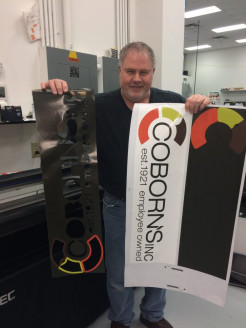 At Coborn’s Print Services operation, Kevin Hemsing Jr. holds up a contour-cut corporate logo, printed and cut on the Graphtec FC8600 behind him.

“The need was there [for more complex cuts], but we couldn’t fulfill what was requested,” Wannigman says. “In order to fill requests, we decided to make this leap.”

The choice has saved the in-plant time and costs, while also opening the door to a variety of more complex signage. Today, he notes, the cutter is used for everything from floor graphics to the removable graphics used around the various locations.

“Also, because we’re a grocery company with more than 8,000 employees, when we send out an adhesive graphic, we have to anticipate that they know how to pull them apart,” he says. By using the Graphtec FC8600, the in-plant can ensure employees are getting precise pieces that can be easily peeled and applied to the given surface.

“It is easier for them to work with the products,” Wannigman notes.

Inside King Tech High School in Anchorage, Alaska, a 54˝ Roland TrueVIS VG-540 eco-solvent printer/cutter has served a different role. The career technical high school is part of the Anchorage School District, which wanted a machine to serve multiple purposes. On the one hand, it needed something students in the entrepreneurship classes could use to create personalized items to sell as part of the curriculum. On the other hand, the in-plant needed a unit that could produce a variety of communication pieces and campaigns for the district.

“The two things went hand-in-hand,” says Pam Butcher, supervisor of ASD Publication Services. “I’m always looking for new ways to solve problems here,” she continues. “We’re an in-plant, so our primary mission is the education of children, not printing. My job is to stay up on trends and what the district can afford, and bring them together and say ‘here’s a new idea or a new way to do something fresh.’” 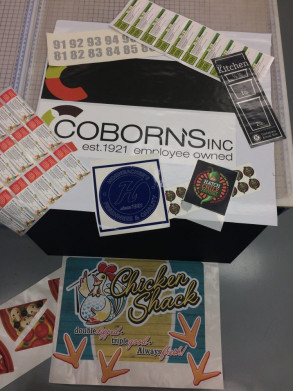 Samples of items printed and cut by Coborn’s in-plant.

The most recent project that uses the Roland device’s advanced cutting is in the final stages of implementation right now. The idea is to get children more excited about testing, says Butcher, so the assessment department came up with the idea of stickers.

For each of the three major tests students are required to take in the spring, they will receive a sticker, designed as a puzzle piece. At the end, students who complete all three tests successfully will be able to put the stickers together to form one graphic.

“It was an intriguing idea, so we came up with a prototype and they went for it,” says Butcher. She notes that the assessment team paid for a low-tack sticker stock that won’t stick to windows or walls and cause damage, and is very easy to lift up. The total for all three sets of stickers for all the schools in the district is around 85,000 pieces — 35,000 each for math and language arts, and 15,000 for science, since not every grade is required to take that one every year.

The cost, Butcher estimates, is around one cent per sticker, and the in-plant is running them in sets of 120 stickers (10 sheets) at a time to ensure everything stays clean and static doesn’t become a problem. It took several weeks to complete the entire run. The in-plant is packaging the sheets of stickers and handling the fulfillment for every classroom.

Beyond stickers, Butcher notes that the ability to offer complex cuts in-line with the printing has been a big draw, with demand increasing as more people in the district are told about the capabilities. To ensure demand doesn’t outstrip supply, Butcher is being strategic about that process, noting that “if everyone knew about it, it would be more than we could handle.” Instead, she notes that when a job comes in, the in-plant staff carefully figures out what is really needed, and whether or not the project could be done in a different way to get better results.

Thinking Outside the In-plant

For Woman’s Hospital, in Baton Rouge, La., a roll-fed printer/cutter was exactly what was needed to expand services beyond the in-plant, notes Dale Johnson, Graphic Services manager. He was looking to start offering more outside work, and he notes, having a contour cutter made a lot of sense in that regard. 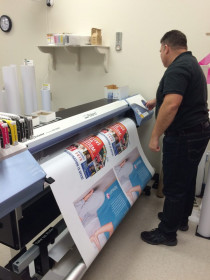 “I was jealous for several years until we built the business up a little bit,” admits Johnson. “We were able to go to the 54˝, and the contour cutter just made sense to include.”

One of the first things Johnson did with the new equipment, he notes, was to print and cut a logo to put on the in-plant’s door, since it is offsite from the hospital and can be difficult to find.

“We also took our van and put cut vinyl all over it, advertising our services,” he says.

While the shop purchased the Roland VersaCAMM VS-540i in 2016, business took off slowly.

“We didn’t know what we had on board,” Johnson says. “Then we hired someone with sign experience, and he showed us what it could do.” That said, the unit now runs for most of the day, every day, on the print side, with cutting slowly being added to more jobs.

For all three in-plants, the margins on work produced by the contour cutters has been good. For those that charge back, having the ability to offer cutting services has been an additional stream of income that can be added to many different types of jobs. For those that offer services to the parent organization at no charge, it is still a net positive, allowing the shops to provide more value with more creative and innovative ideas across the board. 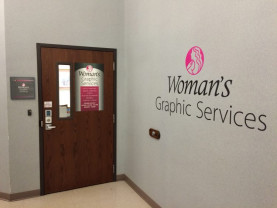 Woman’s Hospital Graphic ­Services printed and contour cut the lettering on the wall outside of its in-plant.

All three managers also noted that while adding cutting to the process does slow down the overall time to print and produce each item, the tradeoff is that there is very little effort to maintain the equipment.

The occasional blade change and, if necessary, an on-board adjustment is all that is needed to keep the equipment running at maximum capacity at any given time. Wannigman notes that his in-plant at Coborn’s now keeps the blades in inventory.

“They are extremely durable, but do have to be replaced occasionally,” he says; he estimates that his in-plant went through six in about a year and a half. “Considering they’re cutting through all that adhesive and laminate, it’s tough on them.”

Butcher suggests that creating and sticking to a regular cleaning program is a good idea, to ensure everything stays clean. She also points out that it is crucial to set up the media correctly to keep the jobs running smoothly.

“We’re careful about setting it up so there are no jams,” Butcher says. “If you get a roll with wonky edges, it can jam the heads, which are very expensive. So we’re careful about handling the materials and keeping everything clean.”

In the end, adding a roll-fed contour cutter can open up a range of possibilities for in-plants of every size and shape. Whether it is new services that can add value to the parent organization, or the ability to better capture outside revenue, contour cutting adds depth and dimension to any project.