Since adding a Heidelberg Linoprint C901, Garry Boytos says his in-plant’s digital output is almost indistinguishable from the work printed by its offset press.

Operator John A. Navarro checks a page printed on the new Linoprint C901 digital color press. The color quality is so close to offset, remarks Garry Boytos, director of UT Print, that it’s hard to tell the difference.

Though some may still complain that digital printing does not match the quality of offset, Garry Boytos isn’t one of them. After installing a Heidelberg Linoprint C901 digital press about six months ago at the University of Texas Health Science Center San Antonio, the director of UT Print says the digital work coming out of his in-plant is so close to offset quality, it takes the most discerning of eyes to tell the difference.

“The color is so evenly applied to the sheet that it looks like it’s printed [with offset],” Boytos lauds. “It’s really hard to tell, and I’ve been doing this for a long time. It doesn’t feel like a copier. It doesn’t have a lot of messy buildup and things like that.”

The Linoprint C901 replaces the in-plant’s Xerox DocuColor 7002. Heidelberg’s Prinect Digital Print Manager provides a single, consistent workflow for offset and digital printing. So instead of sending files to a platesetter or proofing system, they can be sent to the C901s. The increase in quality, Boytos says, has given the in-plant the ability to move some short runs that would have previously been produced offset to the digital device.

“If I only need 50 more books because we had a mistake in bindery, nobody really knows the difference because the color matches,” he says. “That was a big selling tool for me. It takes a trained eye to see the true differences in it.”

In addition to the color quality, another element of the C901 that has been a boon for UT Print is the high-temperature melting point of the toner. Boytos explains that most digital printers struggle to produce work that can be sent through another device without the toner cracking or melting again. However, jobs that come off the  C901 have not had that issue. 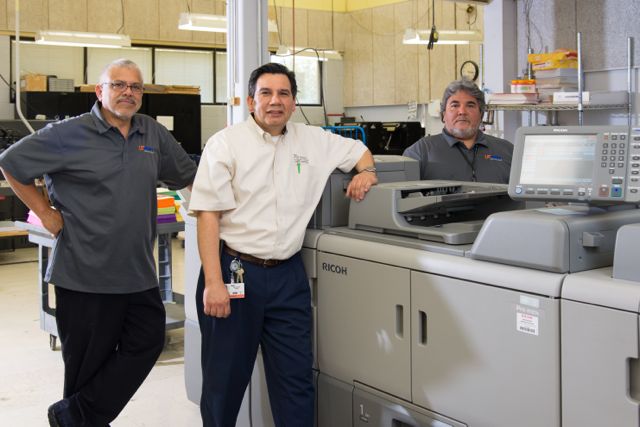 Some of the jobs that Boytos has been most impressed with since acquiring the Ricoh are those that include light-color vignettes. In particular, one of his customers had developed a marketing campaign that included a brochure with a light cream-color vignette. Boytos says that on the old digital press, the color on these documents would appear uneven. To ensure the customer received the quality that was needed, the in-plant would run the job offset. With the new Linoprint C901, that is no longer necessary.

“These were part of our tests for different copiers, and [the Linoprint C901] performed the best,” Boytos recalls.

By moving work to the C901, Boytos says the in-plant has garnered substantial savings. He says costs are down approximately 60 percent per month, which allowed the shop to also purchase the Xanté device.

And while the in-plant is running more efficiently and producing higher-quality work, Boytos says he’s most pleased to be able to pass these savings along to his customers.

“I have an obligation, duty and responsibility to do what’s financially best for this institution,” he insists. “I wouldn’t be doing my job if I didn’t do that.”