The 2018 In-plant Printing and Mailing Association (IPMA) conference concluded June 13 with a riveting debate about outsourcing, possibly the most important — and frightening — issue in the in-plant world.

Consultant Howie Fenton faced off against industry analyst Barb Pellow, with Pellow telling attendees the pro-outsourcing message their bosses are hearing from the business world, and Fenton countering with data that showed how outsourcing often fails and seldom provides the expected savings; 70% expected cost savings, he noted, but 38% reported paying more.

The debate was the highlight of the three-day IPMA conference, which brought nearly 170 attendees to Costa Mesa, Calif. They hailed from a diverse collection of organizations: Mutual of Omaha, Mayo Clinic, the Federal Reserve Bank of Dallas, Bemis Manufacturing, Bloomberg, Dallas Fort Worth International Airport and even the New York City Police Department, to name a few. There were 10 different state printing operations represented, as well as managers from countless universities. (OK, I counted them. There were 29 colleges and universities, plus 8 different school districts there.) 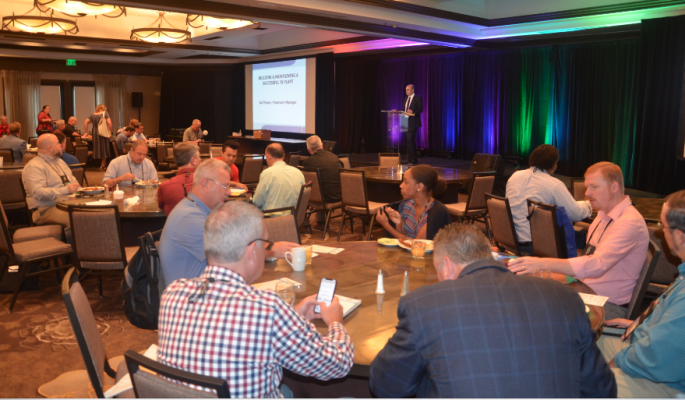 Jud Posner talks about the Church of Scientology's in-plant. 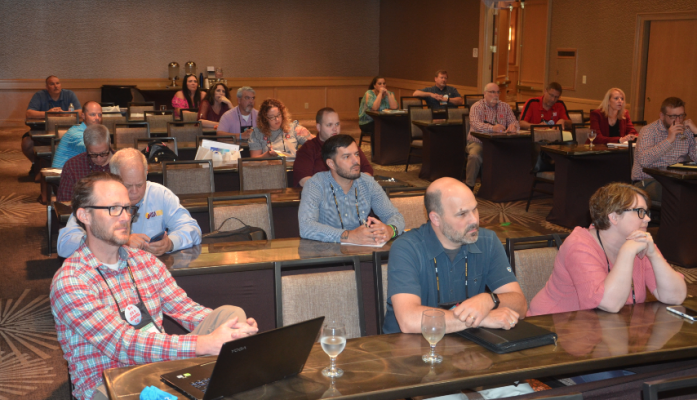 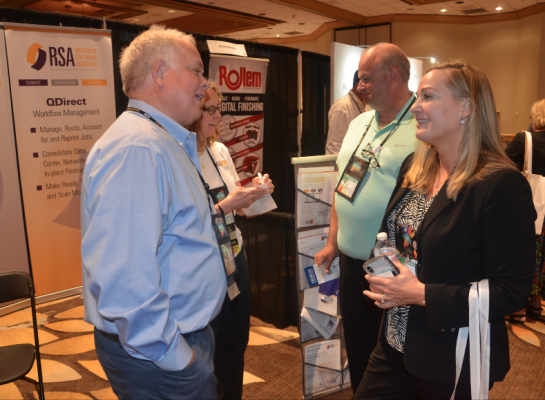 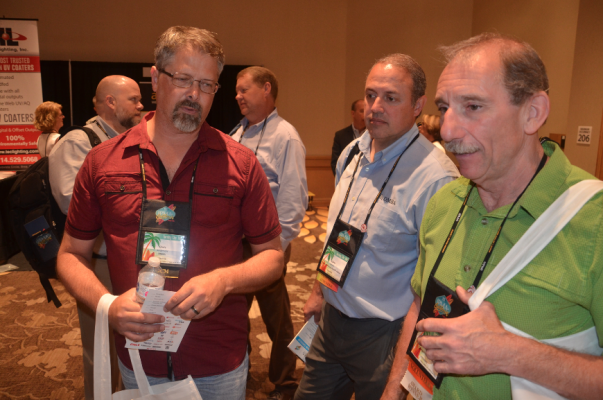 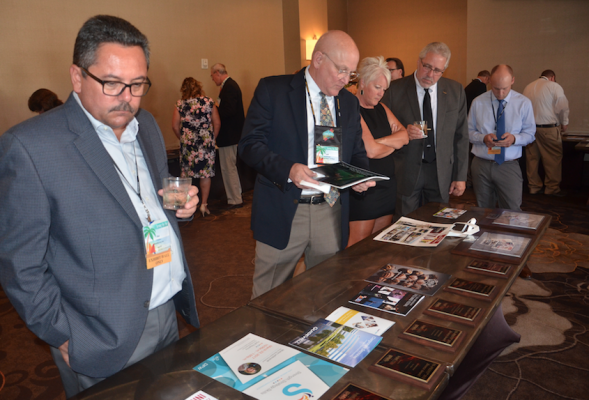 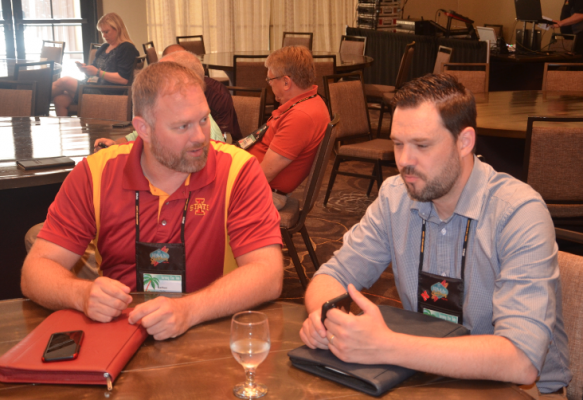 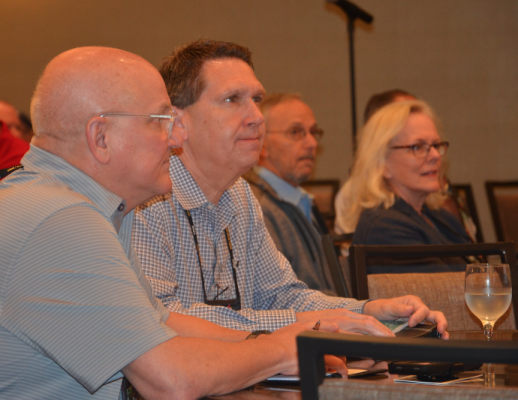 On Monday morning I had the honor of giving the first presentation of the event, as I reported the results of two recent IPG research projects, the most recent focusing on software used by in-plants, with a special focus on Web-to-print and variable data software. 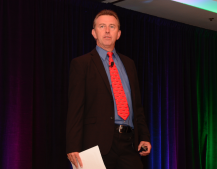 My attempts at humor and enlightenment, however, were quickly overshadowed by Scott Burrows, the motivational speaker who followed me. A quadriplegic, his inspirational talk about overcoming setbacks in life held the audience in rapt attention.

Told he should not expect to regain full movement of his hands, let alone his legs, he refused to give up.

“I was willing to fail, but I was unwilling to quit,” he said.

He demonstrated the result of that perseverance, to the shock of the entire audience, when he rose from his wheelchair and walked across the stage.

The #IPMA2018 conference has started in Costa Mesa, Calif. More than 150 in-plants are here pic.twitter.com/TsRWVDenQ0

Monday night, the IPMA awards ceremony took place, and the winners of Gold In-Print 2018 awards were called to the stage to be honored. Attendees had the opportunity to view all the winning pieces at the reception and vote for their favorite, and during the ceremony Bloomberg was honored with the Attendees Choice award for one of its pieces.

But the real show was the unveiling of the two Best of Show winners, one for offset and one for non-offset. Attendees anxiously watched a pair of videos, which I had shot and edited, showing the judges selecting the Best of Show winners back in March. Again this year, both The University of Texas at Austin and Bloomberg were crowned the winners.

Tuesday began with Jud Posner, who oversees one of the country's largest in-plants for the Church of Scientology International. The church decided to start an in-plant to have more control over costs, schedules and quality, but it took the unconventional approach of training church members with no print experience to run all of its large presses and bindery equipment. Today the in-plant produces 33,000 unique items and has won many awards for the quality of its work.

Posner was followed by keynote speaker Leon Logothetis, star of the Netflix series The Kindness Diaries. His message: “To change the world, all you need to do is change one life.” You can do this, he said, by being kind to someone, which makes them feel that they matter.

At @IPMAHQ 2018 Conference, keynote speaker @LeonLogothetis talks about how being kind to others lets them know they matter. “To change the world, all you need to do is change one life.” pic.twitter.com/0xMKOuhSkc

Immediately after Logothetis finished, the vendor fair opened, and attendees spent time visiting the 47 vendors and getting equipment and software demonstrations. Breakout sessions followed, covering topics like uncoated paper, Web-to-print and how UT Austin's in-plant responded to the recent spate of mail bombings in that Texas city. 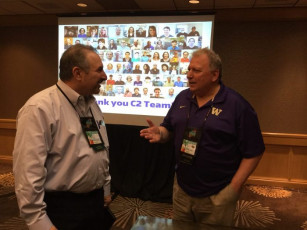 In one well attended session, Frank Davis, director of the University of Washington’s in-plant, discussed the lean changes his operation has made over the past eight years. During that time, the shop went from 160 employees to 77, reduced overtime by half through cross-training, transitioned from offset to digital, eliminated silos and took a team approach and became financially self sustaining.

Employees submit their lean ideas, Davis said, which are evaluated and implemented if feasible. One of those ideas a few years ago was to create a bicycle delivery program for mail. That program has been a huge success on campus and has won awards.

On Wednesday, in addition to the outsourcing debate, IPG columnist and former in-plant manager Wes Friesen gave two sessions on "Successfully Managing In-plant Operations." In the afternoon, Fenton gave a presentation on competitive pricing strategy and a panel of managers offered ideas for success. The conference wrapped up with a dinner cruise. Watch for full coverage of IPMA 2018 in In-plant Graphics.

Live Events on the Horizon: An Outlook for the Printing Industry