Bloomberg L.P. already strongly supported its in-plant. Then it won Best of Show, solidifying its reputation as a top-quality print provider and partner.

The global manager of Bloomberg Ink Print Services had been working with the marketing department at Bloomberg L.P., a privately held financial software, data and media company, on an important brochure. The designer wanted the yellow lettering and images to really stand out against the black background and was relying on the in-plant’s printing expertise to make this happen.

“They really depend on us,” remarks Cruser, who oversees not only the 18-employee in-plant in Dayton, N.J., but the company’s six-employee London in-plant and a five-employee shop in Hong Kong. He and the Dayton team printed numerous prototypes of the job — some using black paper, others using black light ink — before coming up with the perfect solution: a four-color process build of black on the shop’s HP Indigo 7600.

The client loved it. As it turned out, so did the judges in the In-Print 2017 contest, who selected the 22-page, twin loop wire-bound piece as the Best of Show winner out of all the non-offset Gold winners.

“I was so excited,” remarks Cruser, who learned of his in-plant’s victory during an award ceremony at last month’s In-plant Printing and Mailing Association (IPMA) conference in Pittsburgh. “I was really surprised.”

This was only the second year the in-plant had entered the contest, which is jointly sponsored by both IPG and IPMA. Last year the shop won only a Silver award, so winning three Gold awards this year seemed like a phenomenal improvement. Winning Best of Show was beyond Cruser’s wildest dreams.

“I was absolutely speechless, which is extremely hard,” admits the ordinarily garrulous manager. “The marketing team is just through the roof.”

To make it even better, Cruser and his team had just accepted IPMA’s Print Center of the Year award at the ceremony, making 2017 a banner year for the in-plant and solidifying its reputation within Bloomberg as a top-quality print provider.

“All the departments within Bloomberg really support the in-plant,” he says. “There’s never really a question of anything going out. It always comes to us first.”

Coincidentally, the company ran a story about the in-plant on Bloomberg’s website the day after the IPMA award ceremony to tout its Print Center of the Year award, unaware that the in-plant was about to take Best of Show. That breaking news was added just before the story went live.

“They really do support the in-plant very well, and I’m very thankful for that,” Cruser declares. 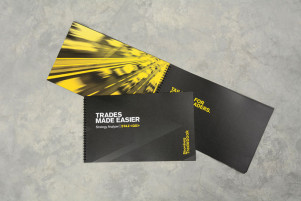 Once the weeks of discussion and samples had concluded, the in-plant set to work on the job, under the watchful eye of Production Coordinator Leanne Trent. Sari Farhi received the files from marketing and prepared them for the in-plant’s HP Indigo 7600.

Operator Jerry Silva printed 2,000 copies of the piece, building the black with CMYK to get the rich black coverage the designer wanted. The job was printed on FSC-certified Neenah Classic Crest Avalanche White Stipple 100-lb. cover paper. Silva pulled printed pages frequently and compared them with proofs to ensure consistency.

Then five of the 11 sheets were sent to an outside trade bindery for some intricate diecutting. Two of the sheets have 15 rectangular windows of various sizes cut into them. Pages were then carefully trimmed on a Perfecta cutter by Chris Blusewicz, who took care to ensure the correct text would be visible through the diecut windows.

“If you didn’t get the cutting and trimming down perfectly, the whole job was shot,” remarks Cruser.

Once the diecut pages were finished, each book was assembled by hand by Blusewicz and shop managers, who ensured each book was in the proper order and the diecuts were in position. Then Blusewicz used a Rhinotuff HD7700 punch and a Renz 360 manual wire binder to finish each piece. Altogether the job took six days to produce.

Though Cruser is proud of the final product, he insists that his staff focuses just as much on quality for every job the in-plant produces.

“It’s like that for everything we do,” he says.

He and his team feel that their work is a reflection on the quality of Bloomberg’s products and services, so they want everything to look great. As a result, he credits all of them for this Best of Show victory.

“The whole team pulled together to produce this incredible document for our client,” he maintains. “Our customers were satisfied and happy, and that’s what we’re here to do every day.”

Measure What Matters: 10 Guidelines to Help