On June 15 in Orlando, FL, attendees of the In-plant Printing and Mailing Association annual conference learned which two in-plants won Best of Show awards in the In-Print 2015 contest. The identities of those winners have been kept secret for the past three months since they were picked by a panel of judges in March, and were unveiled at the end of IPMA's awards reception and banquet.

But the Best of Show winners weren't simply announced from a podium. The audience got to watch the winning pieces get selected via two videos shot and edited by IPG's Bob Neubauer. One video showed the judges picking the best offset-printed piece, and the other showed them choosing the most impressive non-offset piece out of all the Gold winners.

Suspense filled the room as attendees watched one piece after another get eliminated, until only two pieces were left. When the judges took a vote on the final two, the winners were:

This makes four Best of Show awards for BYU, which used a six-color, 23x32˝ Akiyama to print its winning piece: a unique card with split pages that allowed the recipient to interchange heads and bodies on a series of figures, each of which matched up perfectly. Doug Maxwell was on hand to accept the award, his third Best of Show (in five years) as director of the Provo, UT, in-plant. 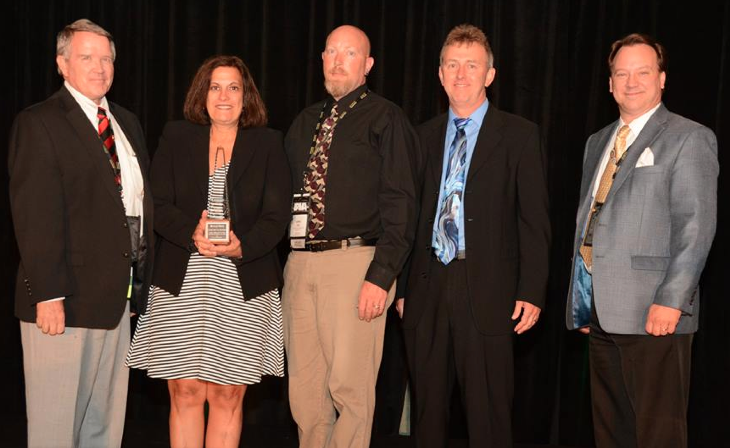 In the non-offset contest, Excellus Blue Cross Blue Shield had the distinct honor of winning both Best of Show and runner up; the last two pieces left standing were both produced by the Rochester, NY, in-plant. Its impressive, multi-piece special project was printed on a Kodak NexPress 3300. Catherine Ciardi accepted the Best of Show award for her team.

The unveiling of those two winners followed a reception in which all winning In-Print pieces were displayed. For the first time this year, attendees got a chance to pick an overall winner of their own. The Attendees Choice Award went to East Carolina University for its football season ticket book.

During the ceremony, all Gold award winners were called to the stage to accept their awards. The in-plant with the most overall In-Print awards was the University of Oklahoma, which won 10, five of them Gold. The World Bank Group earned six awards. Both Excellus BlueCross BlueShield and the Church of Jesus Christ of LDS won five awards this year, while the University of North Texas won four.

The fact that the IPMA award ceremony was moved from the last to the first full day of the conference, now gives attendees a chance to congratulate winners throughout the week and talk with them about their winning pieces. IPG salutes all 67 In-Print 2015 winners and the 28 different in-plants that produced them. To see photos from day one of the IPMA 2015 conference, visit IPG's Facebook page: www.facebook.com/inplant

Here’s a list of all of the Best of Show winners over the past 25 years:

Do Not Miss Your OSHA Deadlines!

University of Oklahoma Doubles Up on NexFinity Presses

Did You Do Your Nozzle Check Today?
Comments
COVID-19 Resource Channel