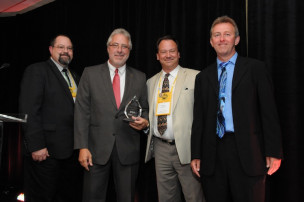 Best of Show is one thing, but sometimes what your peers think is even more important.

At the June In-plant Printing and Mailing Association conference, attendees were given the chance to examine all of the printed pieces that won awards in the In-Print 2016 contest and vote for the one they liked best. The University of Oklahoma’s 220-page case-bound art book showcasing the art housed at the Oklahoma Judicial Center was the hands-down favorite.

Replete with colorful Native American artwork and boasting countless crossovers, that exquisite book had impressed the five judges of the In-Print 2016 contest as well. It was only after much hand wringing that they put it aside to select a different Best of Show winner. But clearly the IPMA audience saw characteristics in the piece that greatly impressed them.

“While I was disappointed in not winning the Best of Show award, being presented the Attendees' Choice award was actually better,” notes John Sarantakos, administrator of OU Printing & Mailing Services. “Having all my peers choose our book over all the other beautiful pieces was special.”

The book was ordered by Yvonne Kauger, Chief Justice of the Oklahoma State Supreme Court, who was very concerned that the colors in the book would match those of the art itself, since the book would be presented to other Supreme Court justices, governors and officials. Sarantakos’ staff came through with flying colors.

“Over the years my folks have produced numerous award-winning pieces. The judicial book was clearly their best effort,” he lauds. “The complexity and the quality demands tested their craftsmanship. I am proud to say that they exceed our customers’ expectations.”

END_OF_DOCUMENT_TOKEN_TO_BE_REPLACED
Subscribe
COVID-19 on In-plant Impressions
Reopening Of America: What Will This Look Like For Businesses Across The US