Though she never intended to work in the insurance industry, Michele Woodrum says she’s “having a blast” leading the print and mail team at Indiana Farm Bureau Insurance.

If asked years ago where she thought her career path would take her, “insurance” may have been the last word out of Michele Woodrum’s mouth.

“My mom was in the insurance business for 50 years, and I said I would never consider working for an insurance company,” she declares.

Now, having spent the last five years as the team lead of Mail/Print Services for Indiana Farm Bureau Insurance in Indianapolis, Woodrum’s thankful she let go of that notion and knows she’s exactly where she’s meant to be.

“I couldn’t see myself anywhere else right now or in the future,” she says, speaking to her department’s solid foundation, the highly motivated, long-tenured staff, and the company’s supportive leadership.

Before reaching this pinnacle, Woodrum had different jobs she says added to her “colorful resume.” Born and raised in Indianapolis, she joined the U.S. Marine Corps in 1983, which took her around the country for four years while serving as a chef. She then dabbled her feet in the print world, working in the mail and print services department of the Indianapolis-based law firm Baker & Daniels (now Faegre Drinker), before shifting her path to law enforcement and private security.

In 2009, Woodrum graduated from Indiana Wesleyan University with a Bachelor’s degree in Business Management, with which she set her sights on pursuing a supervisory role. She applied for the team lead position in Indiana Farm Bureau’s Imaging Services in 2013, since she was familiar with the digitized mail the company was transitioning to, and got the job. She was two years in when the opportunity for team lead of the Mail/Print Services division became available.

“I kind of just fell into it,” she says. “My boss used to have that whole division, so she asked me to make the transition. I got to reacclimate myself, and I’ve been having a blast ever since.”

Woodrum has been part of some significant developments at the in-plant, which runs 24-hour print and eight-hour mail shifts. Following two-and-a-half years of research, she and her boss replaced the operation’s six Xerox machines with a Canon Vario­Print i300 cut-sheet inkjet press and a Canon imagePRESS C10000VP in 2018. It’s an equipment upgrade that Woodrum says has greatly benefited the in-plant’s production — which amounts to around 2 million impressions a month — particularly with the invoices and declarations (or “decs,” i.e., updated policy renewal information) it prints. She has also overseen the purchase of two standalone micro-printers through Canon — HP LaserJet Enterprise M806 models — for check printing.

“What used to take an entire eight-hour shift to run now takes about two hours,” she says. “The mail side is getting the print side quicker and allowing them to cut down on any overtime we had. It’s been an all-around great transition.”

The opportunity to acquire this larger equipment was also part of a large-scale remodel for the in-plant’s 4,800-sq.-ft. facility. During the renovation, the print, mail, and computer operations departments were temporarily housed on different floors of the company’s building as the space was torn out and windows were added. Woodrum worked with her boss on creating the most effective equipment arrangement for the overall workflow.

With these accomplishments, Woodrum is not only thankful for the faith and trust her boss, Clare Aurelio, had in her to assume her role, but for the groundwork she had laid previously in this position. 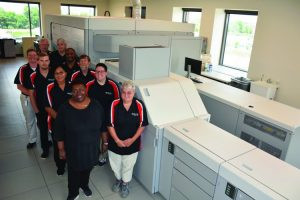 “My boss has done such a great job to just allow me to slide right in and continue on the foundation she has built for us. She had it down to a well-oiled science,” says Woodrum. “We really haven’t changed anything from the basics of the bones she put in place.” For Woodrum, having this guidance as a first-time manager has meant a great deal.

“I came in green and just have soaked up her management style, and she’s allowed me to make it my own; it’s very fun,” she says. “I consider myself very fortunate to have a great mentor.” That support extends to her 13-person staff, over half of whom have been with the in-plant for more than 30 years.

“The best part about them is they adapt and acclimate to the new environments very easily,” praises Woodrum, noting how this has included adjusting to natural staff attrition and reductions in mail runs and manual work. “That has allowed us to look deeper at [whether] we just replace the position or move that position to a more digital skill. And we’ve been able to move in that direction without it costing jobs on the other end.”

Outside of its transactional niche, the in-plant has also had the opportunity to do more marketing print for Indiana Farm Bureau agents to distribute, including flyers, brochures, and business cards, which Woodrum says has been fun for the staff, allowing them to work with color and tactile effects. While she says her staff is very self-motivated, Woodrum emphasizes an open-door policy, making herself available by mobile 24 hours a day, and regularly spending time with both the day and night crews. In addition to providing meals and having staff luncheons, she works with her team to ensure employees are all utilizing their paid time off.

Though employee safety and health are already top priorities for Woodrum and fellow managers, they have been an even greater concern during COVID-19. The in-plant has social distancing and cleaning protocols in place.

“We have not stopped or even slowed our operation since March 13,” she adds. “Everybody has stayed fully employed, and we love to be able to say that as a whole company.”

For Woodrum, this is another testament to the strong executive leadership that she is grateful to have backing the in-plant. This support means the in-plant has had to do very little marketing due to word-of-mouth referrals.

“They get us, they want us, they are 100% behind us,” she says, noting that while every so often, the executive leadership team does have to evaluate the business need, it is never ever in question.

“They like the job we do so well — and we can do it so well with the equipment that we have — that going outside has never been a big issue with us. We have great relationships with outsourcing around the area because there are some things we just can’t do, but from the top right to the bottom we are 100% in-plant.”

When she’s not at work, Woodrum’s hobby is her family, which includes her wife of five years (and partner for 24), Judy, three children, and two grandchildren. While their children may not have pursued print careers, two followed in Woodrum’s footsteps, one as a chef and another in public service, working as a firefighter and for the Indiana State Police. Their youngest is a computer engineer.

In addition to cooking with her family, she and Judy enjoy long-distance riding on her Harley Davidson, which they rode to Colorado last year. She is also a member of the In-plant Printing and Mailing Association and attends Canon’s thINK Forum.

When it comes to the future, Woodrum’s focus is to keep “chugging along” and always focus on what the in-plant can be doing better. With the in-plant’s trajectory and company support, she’s proud to say “insurance” will be her industry for years to come.

“It’s a wonderful thing when an employee comes to you and [asks] ‘Do you think we’ll be here in five years?’ to say, ‘Maybe not in this capacity, but, yes, you’ll be here in five years,’” she says. “Indiana Farm Bureau is a rare breed — we just keep on ticking. It’s a great company to work for, and I’m really very fortunate that I’m here."