In its glory days, California’s Office of State Publishing (OSP) was an in-plant powerhouse, rivaling the U.S. Government Publishing Office in size. With close to 1,000 employees at one time and a giant 323,000-sq.-ft. facility, OSP ran 10 web offset presses, pumping out run lengths in the millions.

Times have changed, though. Declining print volumes and the transition to digital printing have conspired to shrink the workforce to its current 290 permanent employees, plus 40 part-timers, leaving lots of vacant space in that leaky, 67-year-old building. And in a seriously green state like California, continuing to spew high levels of volatile organic compounds (VOCs) from outdated equipment was simply not a sustainable model.

In August 2019, OSP addressed all of this in one fell swoop when it moved into a smaller, more energy efficient facility with a more appropriate mix of equipment. At 128,000 sq. ft., the new facility is about a third of the size of the old plant, but it’s far more efficient. 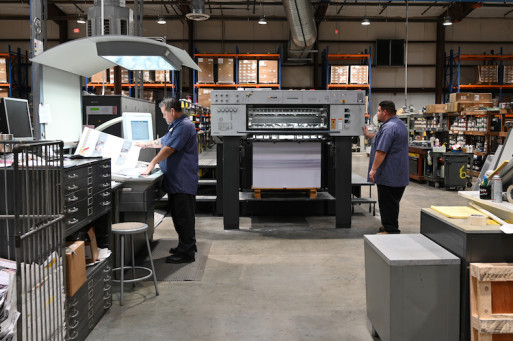 Gone are four VOC-emitting Hantscho webs installed in the ’60s that used to handle legislative printing (they were sold to a printer in Pakistan, Hill says) along with three Harris web presses, used for forms. One web press, an eight-color Heidelberg M-1000B bought in 1999, made the move to the new plant, along with two web offset forms presses, two new Halm envelope presses, a six-color, 40˝ Heidelberg Speedmaster sheetfed press, and three Océ VarioPrint 6330 TITAN monochrome presses, which will now handle some of the legislative printing. OSP also added a pair of Muller Martini Prima saddle stitchers.

OSP invested $12 million in refurbishing the leased facility, formerly a Tower Records warehouse, and preparing the floors to support the presses. Power for the machines has been routed underground, eliminating the need for overhead wires.

Hill is proud to say that the new plant meets the minimum threshold of Leadership in Energy and Environmental Design (LEED) silver compliance, a globally recognized symbol of sustainability achievement. It uses double-pain windows and double insulation to cut down on heating costs.

“It saved us in energy costs $1.4 million annually, by moving into this space,” says Hill.

The new building even has 14 charging stations to accommodate the fleet of electric vehicles used by the OSP. 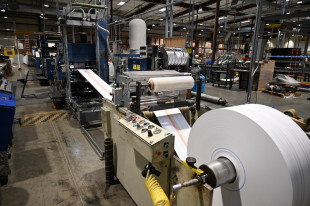 This Drent forms press was one of three web offset presses moved to the new facility.

By eliminating most of the web presses and adding equipment that uses soy-based ink, OSP has reduced its CO2 output levels by a staggering 72%. Waste recovery in the plant has been improved as well with the implementation of an air conveyance ducting multi baler system.

The new facility has also increased efficiency by bringing together the majority of OSP’s administrative and executive staff, formerly working in different facilities. The warehouse and shipping operations are also colocated now; they were previously in an adjoining building. Perhaps the greatest advantage, from a productivity perspective, is the improved workflow the new building allows. Print work doesn’t have to travel as far between machines, and the production floor was laid out for maximum efficiency.

One advantage of the old plant was its proximity to the state capitol building, which was just 1.5 miles away. The new plant is seven miles from the capitol, though Hill insists that’s not an issue.

OSP also maintains a secure digital printing/mass mailing operation closer to the capitol at 10th and Richards Blvd., where it houses its six-color, 29˝ HP Indigo 10000 digital press, along with two Océ VarioStream 7650 continuous-feed presses, a Canon imagePRESS C7011 cut-sheet press, and two cut-sheet black-and-white devices. OSP recently bolstered that operation with a 20˝ Ricoh Pro VC60000 inkjet press, which has been very busy printing statements and forms for a variety of state agencies. Hill says the inkjet press has allowed OSP to capture $1.3 million of printing that was previously outsourced. 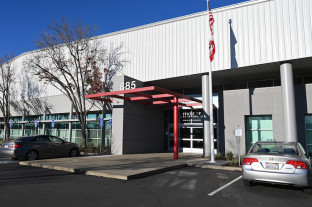 The front of the new facility.

“If we had not moved to digital and inkjet the way we’ve done, we wouldn’t be able to service the state, and all that revenue would be lost,” he says.

OSP is currently researching the addition of a second VC6000 in the main printing plant.

“It is in the plans to put in inkjet web over in this location with near-line finishing,” he says, adding that he hopes to eventually move the entire digital printing plant closer to the new OSP facility.

“The goal is to have them close by here in the near future,” he says.