“I used to have a stack of forms in a shoebox, which took at least three hours to reconcile to do my budgets,” recalls Renee Trock, executive assistant in Education Services. “I knew there had to be some way of tracking print jobs and tabulating so I didn’t have to do it manually.”

“With the EFI Digital StoreFront, it’s maybe a half hour, 45 minutes tops, to do the same thing,” she notes. “And as I do it more, it’s getting even quicker.”

Though Digital StoreFront has certainly simplified the workflow, it wasn’t an immediate success, Trock admits.

“We are on the third year with this system, and we’re seeing success now; the first two years weren’t very successful,” she explains. “That being said, with all the crazy, the team at EFI really came through for us.”

Despite the rocky start, the EFI team stuck with her, working to fine-tune the system, train employees and work out the kinks as many times as she needed them there for it.

“They really were instrumental in our success with this,” she says. “They were just so good throughout the process.”

Part of the challenge was that everything — from the budgets, to the terminology, to the curriculum — changes every year as the state, local and national laws all change. That requires a system that can be nimble enough to be adjusted on the fly, while the foundation remains the same, so individuals across the district can continue to use it without additional training every year.

“It’s a large undertaking every year, that no one thinks of,” says Trock.

The system is now running smoothly, and Trock hopes to roll it out to encompass even more district forms and paperwork. To help get all of the office mangers and clerks fully trained and using the system, there is a tech team member in place, trained on the system, with at least one person on-site at each location across the district.

‘Faster Than Their Hard Copies’

“We have to teach them and convince them this is faster than their hard copies. They don’t like to go paperless when they’ve been doing the same things for decades,” says Trock, acknowledging a common frustration among in-plants that have added Web-to-print systems. The district also plans to get access for the teachers, who will then be able to send their forms and materials for printing directly, and all the office manager will need to do is approve it, which they hope will help streamline things a bit more as well. 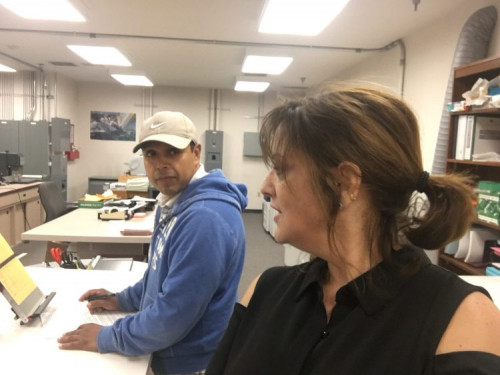 Since adding Digital StoreFront, Trock now has a full and complete accounting of the print expenditures each year. And as the district rolls out person- and department-specific access codes, she will be able to continue to track the data to an even finer degree in the future.

The job ordering process has also become much smoother. Business cards, for example, are now a simple matter.

“What used to happen was the sites would call our department and we would have to go manually into a template, input the information, and send that to the printer, which would then have to make sure it lined up correctly on the card stock,” says Trock. “Now the sites order business cards through EFI and it is on our desk. They go straight to the print shop.” The office manager at each of the 15 school sites inputs the information and sends it right to the in-plant. “This has saved us tremendous time and money,” Trock says.

At the end of the day, Trock and the Saugus Union School District prove that, despite the challenges of implementing new technology and the process change required to meet objectives, it is critical to find a partner that is focused on the end goal.

“One of the big positives for EFI is that they kept going and persevered; I wasn’t the easiest person to deal with, I know. I have a lot to do, and I just wanted it to work,” Trock says. “But they kept insisting and looking at the issues. They’re a very nice company — nice to deal with, and they listen to what you’re saying.”

Did You Do Your Nozzle Check Today?