American cities have been changed by the coronavirus. Even seven months after the initial lockdowns emptied their streets, traffic is still way down as office workers continue working from home, a trend that may ultimately push companies to reduce their urban office space.

Leisure and business travel have all but disappeared, events have been canceled, and cities are experiencing significant budget deficits. This has affected the in-plants that serve them. Though the services these in-plants provide are still vital, budget cuts at the departments that make up their clientele have stripped them of print work, leading to slow days and painful revenue losses.

To find out how city in-plants are faring, we talked with in-plant managers at four cities around the country: Bangor, Maine; Greensboro, N.C.; Oklahoma City; and San Francisco. Fortunately, only one of the four has been forced to lay off staff as a direct result of the pandemic.

“Because of a dramatic drop in tax revenues because of COVID-19, we had to make some pretty big budget cuts,” reports Eric Nazim, manager of Oklahoma City’s print shop. “We lost one of our full-time employees.”

That has left him with just one other full-time employee, plus a part-time worker who handles the mail — a position the city also wanted to eliminate, but it would have compromised mail service, a vital function.

All four municipal in-plants remained open to varying degrees during the early days of the pandemic, even as they watched most other city offices close and their staffs start working from home.

“We’ve been here in the office the whole time, open and running business as usual, and everybody else around us are just scattered and haphazardly available,” remarks Salla Vaerma-Jadlos manager of the City and County of San Francisco’s 20-employee ReproMail department. “It’s really frustrating because we do need certain departments to help us out.”

Those locked city hall buildings required someone to man the doors and question visitors, and in two cases — in Bangor and Oklahoma City — that task fell to the in-plant managers, who were already inside working.

Print work slowed down considerably for each of the in-plants as city events were canceled and departments put projects on hold. 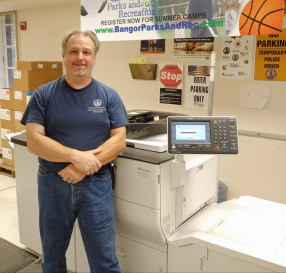 Walter Ryan, Print Shop foreman for the City of Bangor, poses next to his in-plant’s Ricoh Pro C5100s.

“There was a screeching halt,” reports Walter Ryan, Print Shop foreman for the City of Bangor. “Everything stopped.” That included all the work his one-man shop was preparing for high school graduation. Half of his in-plant’s work is done for the city’s school department.

“Monthly, our billing has probably dropped by … $10,000,” reveals Lisa Pitts, division manager of Graphic Services for the City of Greensboro. “That hasn’t picked back up yet.”

She oversees eight employees, five in print, three in mail. Back in the spring, their hours were reduced (without a reduction in pay), but since May they have been back full time. Because Graphic Services prints for the county Health Department, the in-plant printed COVID-19-related handouts, brochures, information cards for testing centers, and lots and lots of signage.

“We were doing nothing but COVID signage,” Pitts says.

A Surge in Signage Work

At nearly every operation, COVID-19 signage and floor graphics have kept the in-plants busy — despite the fact that just one of the four has a wide-format inkjet printer. They have been producing these graphics with other equipment.

In Greensboro, the shop used its Xanté En/Press to print floor stickers, and its Canon imageRUNNER ADVANCE C7565i and 8585i digital presses to print signs. In San Francisco (where the in-plant's first attempt to get a hybrid flatbed printer fell through due to complications delivering it to the shop’s second floor location), ReproMail used its Xerox Iridesse to print signage.

“Anything related to signs is through the roof,” remarks Vaerma-Jadlos.

This includes signage inside city buses, which is currently in high demand. Bus stop signage, as well, has had to be updated due to new routes and schedules during the pandemic, and the in-plant is printing and laminating those. Lamination, she says, is essential to protect those signs against San Francisco’s notorious fog. ReproMail also does some wide-format work on its 44˝ HP DesignJet Z5400.

Clear across the country in Bangor, Ryan found himself in the unfortunate position of getting lots of orders for circular floor graphics from Bangor International Airport, without a machine capable of cutting circles. Unable to order the cutter he wanted due to its unavailability, he used some good old fashioned in-plant ingenuity and an Xacto knife to get the job done.

“I ended up using a very small mixing bowl for the 5˝ circles … a 12˝ pie plate … and a salad bowl that was about 9˝, and that’s how I was making all the circles for the longest time,” he reveals. “I’ve done in excess of 200.”

Last month he finally took delivery of a DoCrafts Xcut diecutter to handle this work.

“It has made it faster,” he affirms. 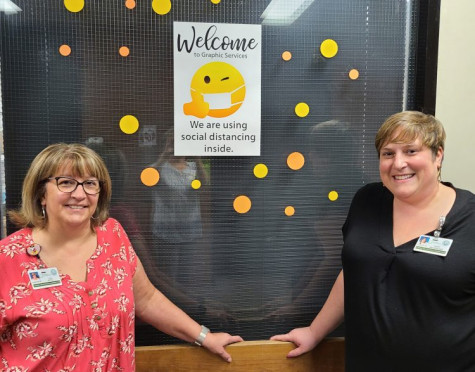 Ryan’s main digital print device is a Ricoh Pro C5100s, supported by an A.B. Dick 9980 offset duplicator. In addition to the school district, he prints for City Hall, Public Works, Parks and Recreation, and the airport. Prior to March, he says, the shop was very busy.

“I was actually on track to have the best year I’ve ever had here,” he says. “And then it has literally been three months of the worst I’ve ever had here. At the end of the [fiscal] year, it basically equaled out to the year before.”

As city workers return to their offices, he has seen work pick up. He recently worked an 80-hour week, he says, printing school packets, voter registration cards, envelopes and other needed materials.

As the in-plant’s sole employee, he knows there is not much more that can be cut from his department, so he is not concerned about being shut down — “especially when you’re the department that prints out the tax bills,” he says.

In Greensboro, the in-plant is staying busy printing business cards, forms for the police department, election materials, and many other items to support city departments and meetings. Mail continues to be delivered, with some changes to mail routes to avoid crowded areas. Employees wear masks and gloves and try to have minimal exposure to the public as they move through buildings.

“We make sure that we’re in and out of the buildings. We don’t stand and chit chat,” says Pitts.

She, like every city employee, is worried about impending budget cuts, and while she has gone over scenarios to prepare for this, she tries to keep these concerns from her staff.

“I don’t want to add that kind of stress to them,” she says. “We are making deliveries and we’re moving mail, and we’re printing and we’re helping people solve problems.”

Work Picking Back Up

In Oklahoma City, where the in-plant lost a full-time employee because of the pandemic, Nazim acknowledges he has had to become more hands-on.

Lately that work has picked up quite a bit, he adds. While print volumes dropped dramatically between April and June, the summer was busier.

“September has been really busy,” he remarks.

Departments are replenishing forms and envelopes as they return to their offices and catch up on work. Agendas, memos and other paperwork for City Hall meetings continue to be printed, even though those meetings now happen virtually. Nazim has seen new types of work, such as letters sent to the in-plant from people working at home that they want printed and mailed. There have also been requests to scan and email incoming mail.

With Print Shop staff down to a bare minimum, Nazim does worry about what will happen if one of them gets sick. With one less employee, everyone is busier now, and there is no way to alter schedules to keep he and his staff apart.

“Now that we can’t split shifts, we’re just doing our best to keep safe,” he says.

In San Franciso, in addition to the stress over the safety of her staff during the pandemic, Vaerma-Jadlos wonders if her in-plant will ever get paid for the COVID-19-related work it’s been doing. FEMA is supposed to reimburse the city for this printing, she says.

“I don’t know that we’re ever going to see any money,” she says. “We’ll do what we can and hopefully we can beat this thing, and then we’ll see what the bottom line is at the end. I’m not going to stress about it.”

ReproMail also has plenty of transactional printing to do, and Vaerma-Jadlos says this work has grown lately.

“Usually when cities start a new process of creating a new form … that can take months or even years,” she says. Now, with time on their hands for such planning, departments are sending the in-plant more of this type of work.

Though it has been frustrating for Vaerma-Jadlos and her staff to be in their facility throughout the pandemic while other city employees worked from home, she says the shop’s dedication has been recognized.

“The fact that we’ve been open the whole time has been noted,” she says. “The EOC [Emergency Operations Center] actually has said that, ‘You guys realize that you’re saving lives by doing all this for us.’ I think we feel pretty good about it.”

In Greensboro, Pitts says her shop has also been acknowledged for its extra efforts during the pandemic.

“Even the city manager has come in here and personally walked through our area, thanking each and every one of us for what we were doing,” she says. This has really helped morale.

For her, though, the real reward is just being able to help customers by turning their ideas into successful products.

“I can figure out how to help them get their message out there, but save this organization money and save us time,” she says. “We make them happy, and they know that we helped them save money in the end. That’s how I know I’ve done my job at the end of the day.” l