Producing marketing materials for multiple college campuses is no easy task, but with 36 campuses nationwide, Columbia College needed a way to print a large volume of booklets without increasing its in-plant’s staff. 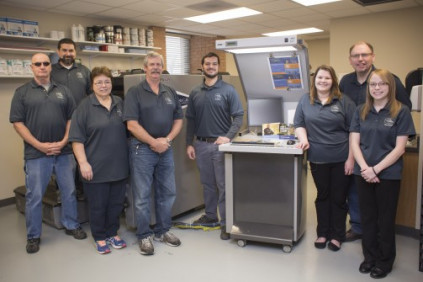 So after convincing management at the Columbia, Missouri, school that adding a digital offset press would substantially save over the cost of outsourcing materials, Columbia’s Mail, Imaging & Print Services department was able to secure a pre-owned Presstek 34DI-E offset press in October.

“This is our first adventure into digital printing,” says Mark Tindell, senior equipment operator. Plates are now imaged directly on the press, eliminating the need for a platesetter.

The nine-employee in-plant, overseen by Director Dan Jimenez, was previously using an A.B. Dick press and a Ricoh Pro C901 Graphic Arts+ to produce marketing materials, but the 34DI-E, an entry-level configuration, has increased volume and image quality.

The in-plant recently used the 34DI-E to print a 6x8.3˝ booklet with 24 pages, which was to be sent to all Columbia College campuses, necessitating a print run of 28,000. Booklets were trimmed, collated and stapled on what Tindell refers to as an “old-fashioned horizontal booklet maker.”

One of the best features of the press, Tindell declares, is that it is waterless, so the problems associated with ink-water balance are eliminated, there’s less dot gain and better color saturation is achieved.

“It requires temperature control because of the ink, but we’re able to print up to 300 lpi,” Tindell reports. “So the image quality is a lot better than what we were getting from the A.B. Dick” or the Ricoh Pro C901.

Not only have the image quality and volume gone up, but the in-plant’s perceived value to the college has increased as well. Mail, Imaging & Print Services has been able to bring more work in-house, rather than outsourcing larger or more complicated jobs.

Productivity has also improved. Tindell says that with the same number of staff members as before, the in-plant was able to increase the volume of work. The two primary press operators, Tindell and Les Toalson, were able to adapt to the new press pretty easily.

“Having someone that knows traditional offset printing has been helpful with the transition,” Tindell remarks.

Tindell says that with the addition of the DI-E press, the team is looking to create 5.5x8.5˝ postcards in the near future. The postcards will be addressed offline, he adds, though it will still be done in-house.

“It would be nice if we could do it all together,” Tindell laughs. “But we can’t.”

Color Standards as a Competitive Differentiator