With the goal of releasing children from poverty, Compassion International relies heavily on its in-plant to spread the word and keep sponsors in touch with the children they support.

Not many in-plants can say that nearly 100% of their work goes toward making the world a better place. Compassion International’s print operation in Colorado Springs is one of the few that can make that claim. 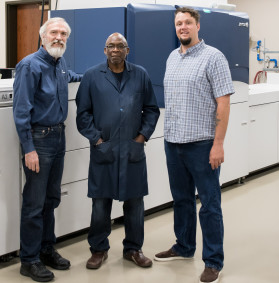 Standing in front of one of Compassion International's two Xerox iGen5 150 digital printers are (from left) Gary Benson, John Harris and Tyler Volesky.

Founded in 1952, Compassion International is a Christian child development organization that pairs sponsors with children who are living in poverty around the world, encouraging each to develop a deeper relationship through monthly financial support, prayer and letter writing. The in-plant prints all the correspondence and other supporting materials that enable this to happen.

So far more than 1.8 million impoverished children in 26 countries are benefiting from Compassion’s “holistic child development program.” The in-plant directly enables these sponsor-child relationships and supports Compassion’s goal of releasing children from poverty in Jesus’ name and showing them that they are loved and have a future. 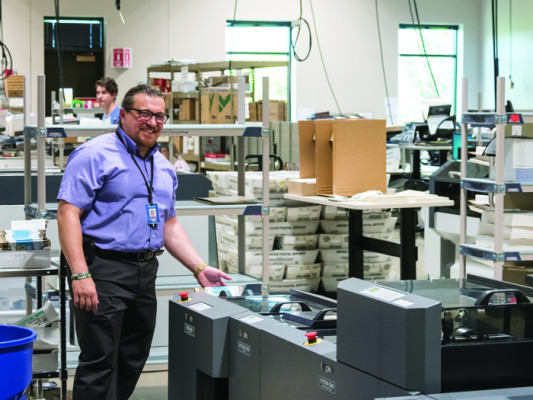 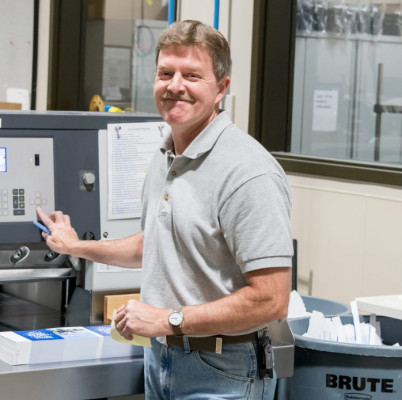 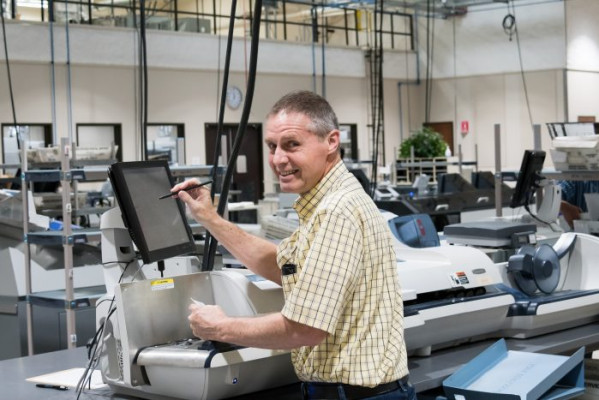 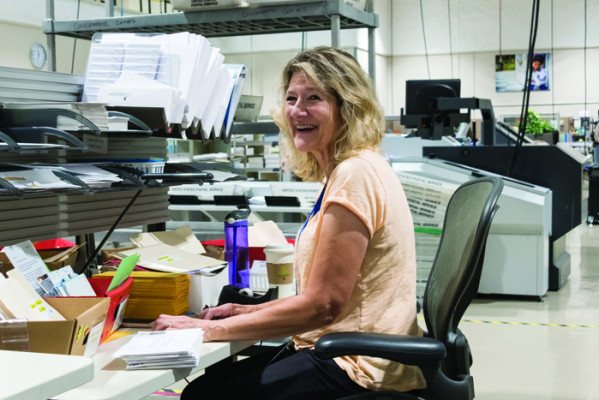 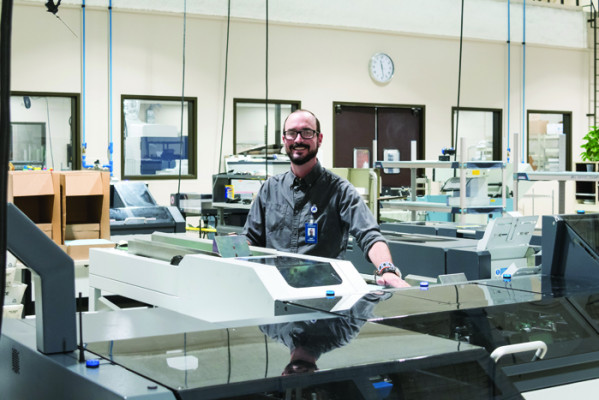 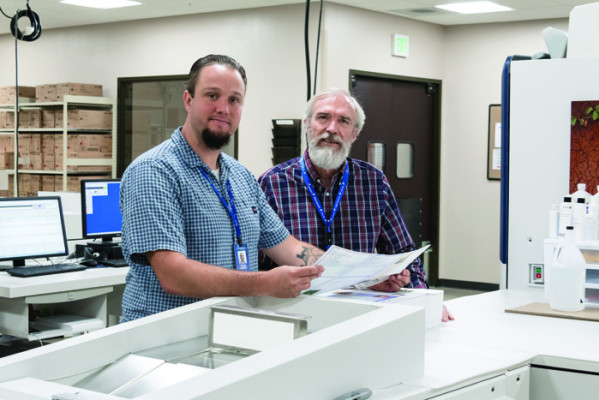 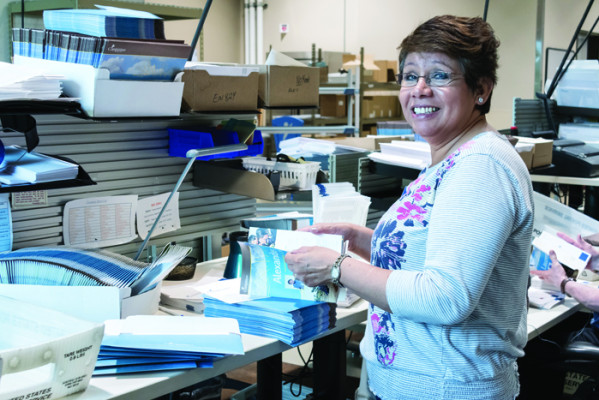 “We print marketing material so that we can go out and acquire new supporters and donors,” he says. Also, “once a supporter has committed to sponsoring a child [or donating in other ways], we print most of the variable data collateral that will help that relationship grow and keep the sponsor updated about what’s going on with the child.” 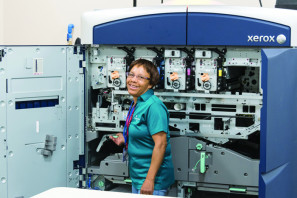 Laurel McNeil stands at the open front of the Xerox Color 1000i.

The first printed piece sent to a new supporter is a welcome kit — a 24-page, saddle-stitched booklet detailing everything they need to know to start the relationship. The kit includes a cover letter, a photo of the child and a sheet of stationery on which the sponsor can write his or her first letter.

The in-plant also prints all of the letters written by sponsors and children — about 3.5 million letters per year. It wasn’t always this way, though, notes Benson. The actual letters written by each child were originally mailed directly to Compassion.

“The problem with that [was] it was taking way too long,” he says. “So we made the transition last year … to have that letter scanned at the field office, so we use that [to build] the print file.”

Those files are sent digitally to the in-plant where they are printed along with a translation and arrive in mere days. This process also helps Compassion monitor the frequency of correspondence, since the success of the program relies on the sponsor-child relationship. The in-plant prints reminder letters if a sponsor starts falling behind in letter writing.

This change had a huge impact on the in-plant’s volume, which is expected to hit 16 million impressions this year.

“Five years ago it was half that,” Benson says.

To produce all this volume, the in-plant relies on a pair of Xerox iGen5 150 digital printers, which were installed in May 2016, as well as a Xerox Color 1000 and a Nuvera 157. One major reason the operation selected the iGen5 150s was because of their 14.33x26˝ sheet size. The in-plant can print A4 letters three-up on a sheet.

“So that was a big driver in our decision to purchase,” Benson remarks. The fast 150-ppm speed of the presses and the excellent quality of their output were also important factors, he adds.

Benson says that up to 98% of the in-plant’s print output is variable data.

“We do very little static printing,” he affirms.

XMPie software is used to create those personalized pieces.

Other items that the in-plant prints include updates from local pastors on how the child is doing and new photos of the child every year and a half. The in-plant handles printing and fulfillment of marketing items for conferences, concerts and special events as well as instruction manuals and posters for internal use.

Compassion has had an in-plant for the past 15 years and has always been a Xerox shop, Benson says. Last year, Xerox named Compassion one of its 2016 In-plant Heroes for its “collaborative and innovative use of Xerox technology and services to make a global impact.” In a video that Xerox produced about the in-plant, Rick Frame, distribution service center senior manager, expressed why Compassion feels so strongly that having an in-plant is critical to its mission.

“One of the biggest advantages for us to have a print center in-house is to be able to control not only the quality but also control the speed,” Frame says. “It’s not that it couldn’t be done somewhere else, but we really have a passion for what we’re doing to enable this relationship.”

Benson heartily agrees. He lists “turn time” as one of the chief benefits of having an in-plant.

“The SLA, for instance, on welcome packets is 24 hours after file receipt,” he notes. By printing these in-house, they are certain to get done on time.

“The other issue is cost,” he adds. “We’ll often bid with outside providers just to make sure that we are providing the best value.”

One reason the in-plant is able to keep costs so low, he insists, is because of its employees. They believe so strongly in Compassion’s mission that they don’t want to waste sponsors’ money, so they look for ways to control costs.

“All the employees here are invested in the mission,” says Benson. “Different than it would be if we just were to outsource to a general vendor bidding on just cost alone.”

Employees take pride in producing quality work because it reflects positively on Compassion, and they work hard to meet turnaround times.

Like at many church-based in-plants, religion plays a big part in the culture of Compassion’s in-plant. Twice a month everyone stops working and goes to chapel, Benson says.

“People are encouraged to join a prayer group,” he adds, and they’re allowed to leave work a couple times a month to attend those meetings as well.

Looking to the future, Benson has a few plans that will expand the in-plant. The operation is already in the process of implementing its first print MIS: Avanti Slingshot along with Xerox FreeFlow Core. Both are expected to go live in the fall.

Benson will attend PRINT 17 this month to look into upgrades for the in-plant’s smaller inserters and to research automating envelope production. He also says that a continuous-feed production inkjet press is on the horizon. Justifying the cost of new technologies like these to upper management has not been difficult, he says.

“If the ROI is solid then we’ve typically gotten really good support,” he says.

This reflects the positive expectations of Compassion International’s leadership as the organization strives to add sponsors and bring even more children out of poverty. The in-plant’s responsibility, Benson says, is to make sure it’s prepared “for the organic growth that’s going to happen with the ministry.”