Journalists attending this week's pre-drupa media event in Düsseldorf, Germany, were jolted awake on Wednesday morning by Epson's announcement of a new office paper recycling machine: the PaperLab. Using no water, the system securely shreds waste paper, then turns it into new paper at a rate of 14 A4 sheets per minute, or 6,720 sheets in an eight-hour shift. 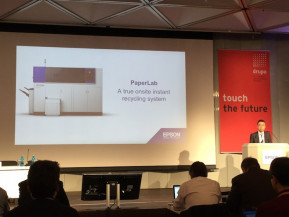 Journalists from graphic arts magazines around the world (including IPG) watched a video animation showing the three separate processes PaperLab uses: fiberizing, binding and forming. It removes both toner and inkjet ink. Epson says it was designed for use in government offices, financial institutions and other enterprises that use large volumes of paper. The company believes the PaperLab represents a 2 billion Euro ($2.2 billion) market opportunity.

Users can produce a variety of types of paper, from A4 and A3 office paper of various thicknesses to paper for business cards. The PaperLab will even produce colored and scented paper.

"Companies can reduce new paper purchases," pointed out COO Sunao Murata, who announced the device. They can also stop transporting paper off-site for recycling—and stop sending confidential documents to external shredding companies, since the PaperLab takes care of shredding too, breaking documents down into nothing but fibers.

Epson plans to put the new "PaperLab" into commercial production in Japan in 2016. Though Epson showed a developmental prototype of the PaperLab at the Eco-Products 2015 environmental exhibition, for now the company is only planning to have a video demonstration at drupa.