To underscore how great work typically starts on paper, Domtar Corp. released a video that shows how comic fans got to meet one of the industry's founding fathers at the recent Comic-Con International.

The film shows a massive 8-foot sheet of paper interacting with fans at Comic-Con, which started as a showcase for comic books and has become one of the world's largest pop culture events. More than 130,000 fans gathered in San Diego, and paper became an instant hit.

Fans—many of whom dressed as aliens, superheroes and characters from movies, television shows and comic books—drew sketches and wrote notes on the giant paper, dancing with it and taking selfies.

"This is a fun way to remind people that this popular event hinges on great work that began with paper as an integral part of the creative process," said Paige Goff, Domtar's vice president of sustainability and business communications. "That's why we used the hashtag #StartedOnPaper. Many of the best comic books, posters and movie scripts have always stemmed from the creativity, imagination, fantasy, adventure and entertainment that originate on paper."

The paper character was created by the company that designed Iron Man, and it used Google Glass technology to allow the person inside to see. Some comic book fans considered it to be one of the most notable things at the show.

The video marks the latest effort in Domtar's award-winning PAPERbecause campaign, which was developed by Eric Mower + Associates to showcase the effectiveness and sustainability of paper. Since its launch in 2010, PAPERbecause has been profiled in The New York Times, featured on the front page of USA Today, and, last month, it won a Silver Lion at the Cannes Lions International Festival of Creativity, which is considered the world's most prestigious annual advertising and communications award honoring marketing excellence.

This is the latest video in a series that has been viewed more than half a million times on YouTube. It's also the second time PAPERbecause has focused on comic books. 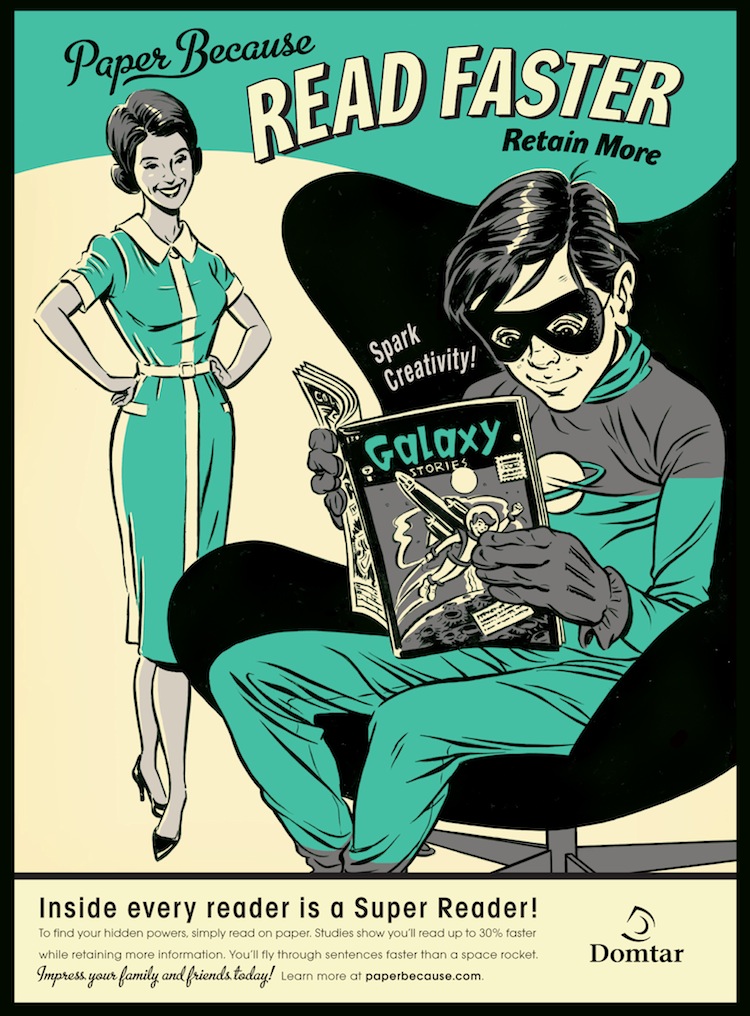 In 2012, Domtar ran this vintage-style print ad in a special issue of Newsweek, showing a boy dressed as a superhero and reading a comic book, while his mother proudly watches. The message: while entertainment options may have changed, people still enjoy reading on paper. An online poll of readers honored the ad as the best in the magazine.

"With PAPERbecause, we've used humor and creativity, we've highlighted environmental stewardship, and we've even developed an app that helps teachers and students," Goff said. "All of it is to emphasize an important point. When you make paper the right way, it's environmentally sound. And even in a digital age, it continues to play a vital role in our lives."

About Domtar Corp.
Domtar Corporation designs, manufactures, markets and distributes a wide variety of fiber-based products, including communication papers, specialty and packaging papers, and absorbent hygiene products. The foundation of our business is a network of world-class wood fiber-converting assets that produce papergrade, fluff and specialty pulp. The majority of our pulp production is consumed internally to manufacture paper and consumer products. Domtar is the largest integrated marketer and manufacturer of uncoated freesheet paper in North America with recognized brands such as Cougar, Lynx Opaque Ultra, Husky Opaque Offset, First Choice, EarthChoice and Xerox Paper and Specialty Media.

Domtar is also a marketer and producer of a broad line of absorbent hygiene products marketed primarily under the Attends, IncoPack and Indasec brand names. In 2014, Domtar had sales of $5.6 billion from some 50 countries. The company employs approximately 9,800 people.