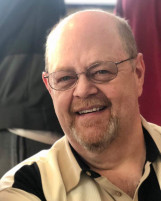 Jim Lyons was in his last year of high school when he took his first print shop class. He was immediately hooked.

“I spent more time there than I did at home,” he recalls.

And so his passion for printing was born — a passion he still enjoys 42 years later as manager of Print & Mail Services at the State University of New York (SUNY) at New Paltz.

Growing up in Astoria, N.Y., and later Dover Plains, N.Y., when his family moved, Lyons didn’t waste much time getting his career started after graduating in 1979.

“I graduated on a Saturday, had a party, and was working full time in a print shop in town the following Monday,” he says.

‘You Have to Hire Him’

Lyons went to work for a friend’s family-owned print shop. Two months later his father “went to the town nearby, to one of the biggest print shops he could find,” Lyons says. “He said ‘you have to hire him, or you’ll close,’ and they said ‘with an offer like that, we have to take him.’ I ended up being there for 13 years.”

While at Eastern Offset, Lyons spent time learning the equipment, and learning the business of running a print shop. At one point, the copy shop that his wife Jean worked in, Copywise, lost its press operator, and she told her boss he could help.

“I went in to help get jobs done, and they offered me a position as the pressman and manager,” he says.

He was there for a few years, and then he and a friend opened a quick print facility across from a college.

“It was a great spot — and then Staples opened up next door and put me out of business,” he laughs.

Fortunately, he had just heard about an opening at SUNY New Paltz, which is located in the Hudson Valley about 85 miles north of New York City. He applied and got the job.

For Lyons, one of the appeals of print early on was its apparent permanence.

“I took to print as soon as I saw it, and thought it was here forever,” he notes. “I truly loved it and thought ‘nothing will ever happen to print.’ Then Bill Gates came around, and now it’s a little different.”

Though Lyons still loves the industry, he says as an in-plant manager his job tends to involve a lot more paperwork than hands-on running of a press — although he still enjoys it when he can get out on the floor.

Lyons is quick to credit his team for the success his in-plant has enjoyed. “We stay busy and work together,” he says, “and I know these people. They are great people who want to be here, and enjoy what they’re doing. I’ve known them all for years, and we just click.”

One of the things Lyons is most proud of is transforming the in-plant from a small copy shop into a seven-person print and mail operation.

“When I first got here, it was like walking back in time,” recalls Lyons. “We were still [outputting a single copy], putting it on glass, and then printing the other 100. We had no color, no wide-format, and it took two weeks to run brochures.” 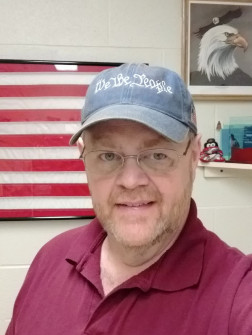 Three years after arriving, however, it was a completely different story. With his urging, his boss at the time brought in everything from wide-format printers to full-color digital presses, as well as a bindery.

“My boss said if we hadn’t done that, they were going to close it up,” he says.

Lyons later took over mailing services as well, upgrading that operation from taking slips of paper to track individual packages, to using software to track as many as 10,000 packages.

“We would be lost without that now,” he says.

In 2009, Lyons combined the print and mail areas after discovering a hidden door that linked the two.

“We moved a bookshelf, and found a door behind it that connected it. We moved the shelf and “wait a minute!’” he laughs.

And then in 2011, Hurricane Irene destroyed everything, literally. Two feet of water flooded into the in-plant as a result of the storm, destroying its equipment in seconds. Faced with such a devastating loss, Lyons once more had to defend the in-plant’s existence to the university. The good reputation he had built, combined with the cost savings the in-plant was providing, saved the operation.

“They realized they would save money by rebuilding us,” he says.

In 2016, Lyons was honored with the Chancellor’s Award for Excellence in Professional Service by his university. A press release lauded his stellar reputation on campus:  “Under his management, both the print shop and the mailroom have evolved into extraordinarily efficient operations … known around campus for providing expansive services and top-notch customer responsiveness.”

Lyons is proud of his operation and of the staff that makes it work so well. He is also happy that working in the in-plant allows him to “balance spending time with my family, and not get lost in the job. You can work for the state, or you can get rich,” he laughs.

And for him, the ability to go home every night and spend it with his wife and 24-year-old daughter Lauren was a priceless trade off. At one point, he notes, a major print operation was trying to recruit him, but the work would have required him to give up nearly all of his free time, so he ultimately decided the trade-off wasn’t worth it.

His daughter today works on Madison Ave. in New York City, at a marketing agency.

“She used to help me all the time, and she enjoys print,” Lyons says. “Now that she’s in marketing, we’re always talking about what she’s working on.”

An avid target shooter, Lyons loves going to the range with his daughter, who also enjoys the sport. He has two dogs, and notes that even after 36 years of marriage, he still enjoys spending time at home with his wife.

Lyons has no plans to retire any time soon, and hopes to still be at the in-plant many years from now, seeing it continue to grow and evolve as print and the world in general continue to change.

His overall philosophy for success and life boils down to a simple belief that, ultimately, everything will fall into place.

As he likes to say to family and friends, “find a job you love, and you will never work a day in your life.”

Printed Course Packs On the Rise at SUNY