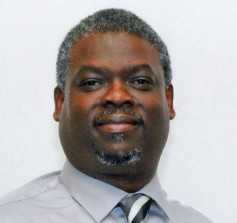 Reuben Joseph has never forgotten the wise words of his first director.

“Always remember that everything that we print is seen worldwide, so you have to make sure that the quality and the look represent the university,” Joseph recites.

The concept that a brochure he printed in his small Texas shop would be viewed in faraway places and influence opinions was eye-opening to the young Joseph, and would inspire him throughout his 33-year career at Texas Southern University (TSU), in Houston.

That career got off to an accidental start while the Houston native was enrolled in the automotive program at TSU, one of the nation’s largest historically black universities.

“I was taking an elective during my senior year, and I decided to take printing,” he says. “It was amazing to me to take a blank sheet of paper and what you could do with it. I changed over and have been in printing ever since.”

This senior year change of direction added a few years to his studies. While taking printing and photography classes, Joseph worked part time in the university’s seven-employee in-plant. In 1988 he was hired to work full time at University Printing (now University Reprographics), thus beginning his long career there.

“They liked what they taught me, so they kept me,” he observes.

At the in-plant, Joseph set type by hand using a California job case, shot film, and ran the one-color A.B.Dick press. Later, he moved on to the Ryobi 2800 and Heidelberg KORD presses.

At first, the in-plant operated as both an educational department and a production center, but eventually became strictly an in-plant. At some point, the offset and copy departments were separated, and the university contracted with Xerox to run the copiers and manage its fleet.

Over the next 15 years, as Joseph took on more responsibilities, he gradually ascended in the ranks until 2003, when he was promoted to manager. One year later, the Xerox contract expired, and Joseph suddenly found himself with some great opportunities.

“When the contract ended, I took over the copy center and the copier fleet,” he says. “It was a good opportunity for me and the university.”

Offset and copying were recombined, and Joseph switched copier vendors to get a better deal for the university. Today he manages a fleet of 170 devices.

In the years that followed, budget cuts and retirements reduced the size of his staff, and he eliminated the offset equipment and went all digital. The current operation is split into two sites: one for digital printing and another for bindery and wide-format printing. The addition of a Ricoh Pro L5160 wide-format latex printer and, last summer, a 4x5' Colex contour cutter were good moves, allowing the in-plant to produce window signage, floor graphics, and a variety of wraps.

“It gives me the ability to bring a lot of things that were going off campus back on campus,” he notes.

The shop has an 18x24˝ Mimaki UJF-6042 MkII flatbed printer, as well, but Joseph has plans to bring in a larger one. He also wants to merge mailing services with printing to better serve the university.

Joseph is thankful his administration recognizes and supports his efforts to add value and backs the technology advancements he has suggested. He learned about many of these advances through his loyal attendance of in-plant conferences.

Attending these events showed him that other managers face the same challenges he faces. He says he gets new ideas each time he goes to a conference.

“I try to bring something back to keep the university moving forward,” he says.

Joseph is proud of the role he plays in serving the university and providing top-quality printing.

“What we print represents us, so it has to be at a top level,” he says, reiterating the lesson he learned long ago from his first director.

Outside of work, Joseph stays active by playing basketball, flag football, and going jogging. He and his wife Deirdre, who just celebrated their 31st anniversary, also love riding their horses through the Texas pastureland. The couple has twin sons, age 26, who have degrees in math and physics.

For Joseph’s part, he has no regrets about changing his major all those years ago and going into the printing trade.