Though he left it behind several times, Eastern Kentucky University kept summoning Richard Tussey back home.

Unlike most of his childhood friends, Richard Tussey knew what a Linotype was when he was just 12 years old. His neighbor used one to print the local paper and Tussey helped out on occasion.

“More than once I would spend a Saturday at the newspaper being a part-time galley boy,” remembers Tussey, director of Printing and Mailing Services at Eastern Kentucky University (EKU).

But that early exposure to printing in his home town of Cynthiana, Ky., wasn’t enough to lure him into the business — at least not right away.

“I always wanted to be an electrical engineer,” he admits.

To that end, he enrolled in Georgia Tech, switching after a year to EKU to study Industrial Technology, specializing in communications electronics. But then fate slipped him a curve ball.

“Everybody in Industrial Education had to take a class in each of the main programs,” he says. This included a class in graphic arts.

“I took that graphic arts class and said, ‘wow,’ I kind of like this,” he recalls.

Tussey ended up graduating from EKU in 1975 with specializations in both graphic arts and communications electronics. He used his graphic arts knowledge to start his own screen printing business, the profits from which helped pay his way through graduate school. 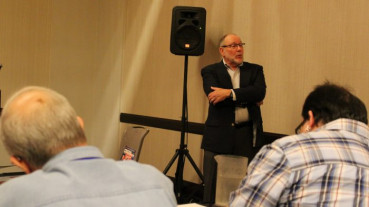 Armed with his masters degree in Industrial Education, specializing in design and graphic arts, Tussey landed a job with a small commercial printer called AA Printing. There, he oversaw the offset department, running a Multi 1250 and other equipment.

While employed at AA, a teaching opportunity opened up at EKU, and Tussey became a part-time graphic arts instructor. That blossomed into a full-time contract position, so he left AA and taught graphic arts and drafting for the next three years.

“I love teaching,” he declares.

When the contract ended, however, he found himself pulled in a different direction entirely. His experience with electronic typesetting got him hired as a supervisor at a prepress house in Lexington, Ky., called Magna Graphic. The company had just bought a Scitex 300 Response color prepress system to provide film for the textbook publishing industry and was “surfing on the edge of the digital revolution,” says Tussey.

He admits, though, that the “outrageous” hours of the job brought a lot of stress, which wreaked havoc on his personal life. So when World Color bought the company in 1998, “that seemed like a good cue for me that I needed to change and do something different,” he says.

So he resigned spent the next year remodeling his house.

After so many years away from his alma mater, he never expected to return there, but when a friend called and told him about an opening for a coordinator of EKU’s workforce education program, Tussey decided to return to higher-ed.

After running the program for a few years, he was approached by the IT director, who also happened to oversee EKU’s printing and mailing departments. The print shop was a mess, he said. It was losing $100,000 a year. Would Tussey consider becoming the manager and turning it around?

He didn’t even have to think about it. No way, Tussey told him.

“I had clean fingers,” he laughs. Printing was in his past, he insisted.

But the IT director was persistent. After a few weeks of discussion, Tussey finally agreed to take the job.

“It might be a mess,” he reasoned, but he had plenty of ideas of how to fix it. “It wasn’t rocket science.”

In 2003, Tussey walked into a shop that had been neglected by its previous manager. Apathy ran strong among the staff.

“They did not know what it was like to work for a small company where you’re being self-supporting,” he observes. “They worked for this big university. If jobs got done on time, they got done on time. If they didn’t they didn’t.”

Tussey made them see things differently. He wanted to run the in-plant like a professional business and made sure everyone was on board with his plans. He started by bringing in the shop’s first digital color copier, along with a Duplo System 3000 bookletmaker, to get the shop away from stitching jobs by hand.

To improve record keeping and job workflow, and get away from paper records, he used Microsoft Access to create a job database so he could look up job history and quickly review specs and pricing.

“That’s probably the one thing that brought organization,” he reflects.

“Suddenly we were in big-time production,” Tussey says. “[Printing] 1,000 brochures was nothing.”

Noticing how well Tussey was managing the in-plant, EKU’s VP of Finance approached him to spearhead the university’s copier management program in 2007 to better control pricing and eliminate the wasteful ordering of full-featured devices. The five-year lease that resulted saved the university $72,000, he says. The second five-year lease, he adds, will save an additional $91,000. 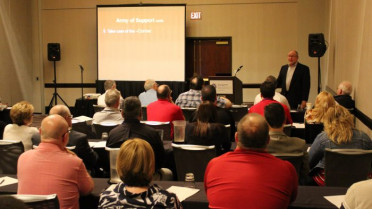 In 2005, Tussey attended his first Association of College and University Printers (ACUP) conference in Columbia, Mo., and his eyes were opened. He attended almost every subsequent ACUP conference and currently serves as president of the association.

Tussey credit’s ACUP with putting him in touch with innovative peers around the globe who gave him great ideas. He picked up one of those ideas while touring the University of North Texas at ACUP 2011 and seeing the in-plant’s inserting machine. When he got home, he added a Hasler inserter, then went to Admissions and offered to save the department time and money on its daily mailings, which were being inserted by hand. The in-plant now handles all of those mailings, and is a close friend of Admissions.

“That one piece of equipment has done more to help us be part of the overall operation of the university than anything else,” he says. “Every day we’re mailing Admissions materials out.”

This close relationship has also resulted in the in-plant being appointed the official subcontractor for all EKU printing.

“Essentially, it’s right of first refusal,” Tussey explains. “That did a lot for furthering our image and our reputation on campus.”

A year and a half ago Tussey was given oversight of the mailing operation and he has since added efficiency by centralizing mailboxes within various buildings and expanding them so they can fit packages.

Tussey continues to upgrade the in-plant’s equipment. A year ago he brought in a pair of Canon imagePRESS C700s to further improve print quality. We has his sights set on replacing the shop’s aqueous wide-format printer soon.

“This year the big plan is to move to a latex machine,” he says.

Looking back at his career, Tussey is proud of having been able to transform his in-plant from a poor service, money-losing shop to a professionally run, award-winning operation. Over the years, the in-plant has received both internal and external awards, such as ACUP’s Collaborative Service and Green Service awards.

“We literally have become a profitable, miniature company,” he says.

But also, he’s proud of his staff for always seeking ways to do their jobs better.

“They are good, knowledgeable people,” he praises.

Though he never became the electrical engineer he wanted to be in his early life, he’s happy with his career as an in-plant manager.

“I get instantaneous job satisfaction because I make a product,” he explains. “Every day I get to see what my hard work produced.”

Outside of work, Tussey enjoys outdoor pursuits like backpacking. He recently took a hike through Kentucky’s Red River Gorge. After this year’s ACUP conference at Lake Tahoe, he and his wife Chris plan to do some hiking in Yosemite National Park.

“I’m also a boat person,” he adds. With his house boat, two kayaks and a pontoon boat he enjoys exploring the waterways of central Kentucky.

Three New Challenges of the New Normal
END_OF_DOCUMENT_TOKEN_TO_BE_REPLACED
Upcoming Webinars
Print Outlook: What to Expect in the Year Ahead