It started with a friendly invitation.

“Four or five years ago, I did an Internet search for the copy shops and purchasing offices of our local school districts,” says Dwayne Magee, director of Messiah University Press and Postal Services (MPress). “I located and identified three individuals from three of the four area school districts. Then, I invited them for a tour and a free lunch.”

His intent was to introduce them to his Mechanicsburg, Pennsylvania, in-plant and establish a relationship. In the ensuing years, he stayed in touch with them, sending holiday cards and occasional emails.

Then last year, the in-plant manager at one of those districts, Mechanicsburg Area School District (MASD), announced her retirement plans. Because of the relationship Magee had forged, the director of Business Operations at MASD contacted him to discuss a strategy. In May, they announced a deal:

MASD would adopt MPress as its new in-plant, sending all its printing to the 10-employee shop. The move will not only save MASD a lot of money over the cost of outsourcing to a commercial printer, but the district will also gain all the advantages of having an in-house shop, including priority service and attentive employees who understand MASD’s preferences and branding.

For its part, MPress will see an influx of work that will fill the excess capacity on its equipment, driving down operating costs, while bringing in revenue to fund future expansion. The deal also supports the university’s focus on strategic partnerships. Messiah’s 2021-2024 Strategic Plan specifically lists goals related to strategic partnerships that focus on relationship building and revenue.

“I am thrilled that we found an opportunity to be a part of fulfilling this important goal,” Magee says. “This is also a great fit for each of us due to our mutual focus on the priority of education.”

While 60% of in-plants insource work from outside their parent organizations, according to IPI research, only a handful become the sole print provider for another organization. MPress already insources $150,000 worth of work annually, Magee says, so he has experience keeping the outside revenue and expense data separate and coding each appropriately in the shop’s PrintSmith software.

The win-win arrangement evolved directly from Magee’s initial outreach, but what sealed the deal was MPress’ willingness to provide the same in-house benefits to Mechanicsburg that it provides to Messiah: low cost, close proximity, personalized service, guaranteed 48-hour turnaround time, and a variety of services. Magee also offered the possibility of hosting MASD students who are interested in learning about graphic design, print, or mail services, as the in-plant already does within Messiah.

Much of the new work from MASD will be classroom-related, such as handouts, study guides, and manuals. These items are typically three-hole drilled, saddle-stitched, corner-stapled, or comb-bound. Magee expects this to amount to about 3 million additional impressions per year, nearly tripling the black-and-white volume of MPress. In addition, the in-plant has designed and printed football tickets, a strategic plan, and a 6x11" postcard mailing for MASD. Magee’s team also helped MASD develop branding guidelines.

To help MPress produce this work, MASD turned over its Toshiba e-STUDIO1057 with a bookletmaker and two e-STUDIO907 monochrome printers, all of which still have a year left on their leases. While they aren’t ideal production machines, Magee says they will work well for copying hardcopy documents, which he expects to make up about half the new volume. The other half will arrive through MPress’ PrintReach MyOrderDesk system. As MASD did not have a Web-to-print system, this will be a welcome improvement.

The in-plant also runs a Xerox B9110 and a Versant 80. As the Toshiba leases near their end, Magee expects to use the production data he gathers to select an appropriate replacement device (possibly an inkjet press, he hints). 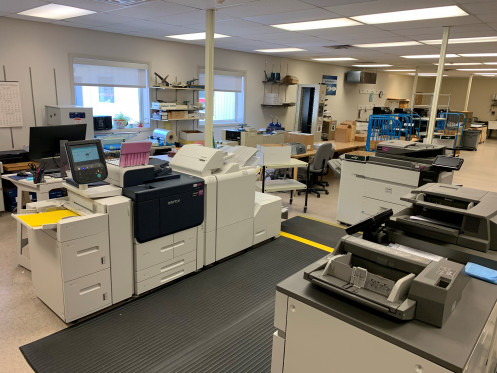 To help produce all the new work, MPress’ Xerox PrimeLink B9100 was joined by MASD’s three Toshiba printers.

Finished jobs will be picked up twice daily by MASD’s delivery driver, who will add Messiah to the route, which includes the district’s eight schools. Though mailing services were not a primary focus in the contract, MPress has done a mailing for MASD’s “Wildcat Foundation” golf tournament fundraiser, plus a USPS Every Door Direct Mail campaign. The in-plant is awaiting delivery on a new Kirk-Rudy NetJet inkjet addressing system, which will help it take on outside work that involves mailing.

As for handling the influx of new work with his staff of 10, Magee is confident in his cross-trained teams’ abilities. If necessary, he will add swing shifts and overtime to get the work done. He is also trying to hire a production worker, he says, “but there haven’t been any applicants. Zero.”

The new variety of work from MASD will be a welcome change for his staff, he says, giving them experience with new applications and making their jobs more interesting.

Magee hopes this partnership will pave the way for additional such arrangements with other school districts.

“It is truly a strategic partnership between two organizations who are all about education,” he says. “We have a mutual interest in making our community stronger.”