And that isn’t even the hard part.

Ask Ray Konecsni, who has done wonders in redeploying copiers and MFD equipment at the University of Regina in Regina, Saskatchewan. 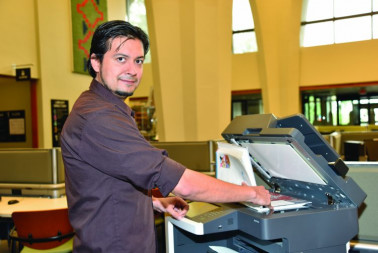 The fleet at the University of Regina is now standardized on eight models of printers and MFDs placed in strategic locations, such as this one being operated in the library by engineering student Daniel Soto-López. (Photo by University of Regina Photography Department)

By remodeling the way in which the school’s population gets its small-quantity printing and copying done, he and his in-plant team have cut operating costs dramatically and shrunk the number of installed devices to a fraction of what they were. The security and environmental benefits are also substantial, and there’s renewed faith on the part of faculty and staff that the school’s print management program is actually on their side.

But it’s a good fight that Konecsni, director of IS Customer Support Services for the university’s Information Services unit, has had to carry on for almost eight years — closer to 10, if the initial planning stages are counted. He’ll be the first to say that psychology, diplomacy, marketing, and public relations have been as crucial to the success of the program as anything on the technical side.

Part of the success lies in the fact that fleet and print management at the university has remained in the hands of its in-plant and has not fallen under the sway of an outside vendor. According to IPG survey data, only about one-third of in-plants are in charge of managing their parent organizations’ MFD and copier fleets. Konecsni recalls that a lack of centralized control was costing the university more than it realized.

The the University of Regina is a sizeable institution with 16,550 students, 25 academic departments and 18 research centers and institutes on a 239-acre main campus, located about 350 miles northwest of Bismarck, N.D. Scattered across campus, before the optimization program took effect, was a fleet consisting of a mixed bag of about 1,200 mostly desktop devices acquired randomly and operated according to no internal standards.

The result, Konecsni says, was “increasing customer dissatisfaction regarding the reliability of the machines, the quality of the output, and the cost” of dealing with a situation that prompted people either to buy their own MFDs or to take their copying work off campus altogether. Following a reorganization that placed Printing Services (the in-plant) under the jurisdiction of Information Services, Konecsni was ready to make a pitch for something better.

He knew that because the university’s practice had been to purchase used analog copiers and put them under maintenance contracts, costs were higher than what an all-inclusive cost per copy agreement would have offered. There was also the effect of a “use it or lose it” tendency by some departments to spend surplus funds at year-end on printers whether they were needed or not.

“I explained to senior management that if the university truly wanted to manage enterprise print costs, it would need to control the entire process — fleet copiers, desktop printers, in-plant production and outsourced print,” Konecsni says.

This eventually would lead to the centralization of printing under the in-plant and the creation of university policies supporting the in-plant’s role. But first, Konecsni had to convince management of how seriously in need of remediation its printing resources were.

He couldn’t do this by personal fiat. “As this is an academic environment, one person’s analysis is considered opinion,” he says. “We needed to prove our theory.”

So, at his recommendation, the university issued an RFP to engage an independent, brand-agnostic technology consultant to assess the fleet and develop something the school hadn’t previously had: an enterprise-wide print strategy.

Konecsni says an “exhaustive list” of qualifications was used to evaluate 13 respondents to the RFP, which went out in September of 2008. One of the reasons that the Print Operations Group (POG) consultancy of Calgary, Alberta, won the assignment was its skill at “cultural navigation”: a technique for winning hearts and minds that would prove to be indispensable for making the optimization plan work.

“The university environment with academic freedom is not one where a solution can be mandated,” Konecsni observes.

Participation in the assessment phase was voluntary, with about half the campus agreeing to be reviewed by POG. Because most of those declining were in academic areas, the initial device count was based almost entirely on what the consultants saw in the administrative sections. Even so, the findings were disturbing.

The fleet, comprising 173 unique types of devices, had neither a uniform technology standard nor a coordinated support program. The ratio of users to output devices was 1.2 to 1, meaning, essentially, that each user had his or her own machine to work with.

That wasn’t all. Nearly three-quarters of the printing performed on campus was done on desktop devices instead of centrally located workgroup machines. Almost one-quarter of the output was in costly color. According to Konecsni, the distributed price — the fleet costs of the MFDs, copiers and desktop printers installed at the time — came to more than double the industry average of 9¢ per page.

Among POG’s recommendations for getting the fleet under control through an organization-wide output strategy were moving to a standard suite of MFDs; operating them on an all-inclusive click charge basis; and setting up a centrally coordinated service to manage, measure and optimize the entire print environment. The plan identified eight MFD and printer models — six monochrome, two color, most of them letter-sized, none of them inkjet — as the devices to standardize on.

A business case presented to senior management, deans and others on campus helped to drive home the findings of the POG research. Next came selecting an equipment supplier.

The vetting process gave each responding vendor 48 hours to set up an on-campus demo of its proposed solutions as per the terms of an RFP issued in December of 2009. One of two finalists, the Regina branch of IT solutions provider WBM Technologies Inc., was awarded a five-year optimization contract in April of 2010. Implementation, administered by the in-plant, was set to begin two months later.

It was at this point that Konecsni began to realize how central to everything the soft arts of friendly persuasion were going to be.

“Our initial plan was to remove the old devices when we brought the new MFDs in to be installed,” he says. “We did this for the first couple of units, however the backlash was so great that the faculty administrators protested it.” Senior management intervened, and the plan was relaxed to give faculty members five years to remove their old devices.

That was when Konecsni and his team decided that a behavioral change management plan was in order. They found that people had strong emotional attachments to their printers — strong enough to make them believe that the more devices they were surrounded by, the more important they were. Konecsni says, “we had staff that had a color inkjet printer, a monochrome laser printer, a fax and a scanner, all in their office — and they still used the central copier.”

Politics in the form of reluctance to rock academic boats also stood in the way. (Konecsni remembers being told by a senior administrator, “If you think I am going to anger a tenured professor over a $65 printer, you have another thing coming.”) Overcoming resistance would mean raising awareness of what was happening, why it was desirable and how people could take part positively in it.

This was where psychology entered the picture. “Initially, we thought that promoting the cost savings benefits would be attractive, but that blew up in our face as the academic side of the house felt that this was another way to limit academic funding,” Konecsni says. By pivoting to the optimization plan’s environmental benefits, the team got stronger buy-in, especially when the president of the university held it up as a “poster child” example of sustainability on campus.

A behavioral change management plan aimed at end-users needs to be revisited regularly, Konecsni advises. He says program staff took numerous opportunities “to try and demonstrate how ‘fun’ it was to use the new technology.” They also promoted the need to get up and walk to a shared MFD as a wellness initiative — prolonged sitting isn’t healthy, and the new routine would be one way to become more active at work.

Above all, says Konecsni, the team listened with empathy to concerns about surrendering individual devices. “They now wanted to know the WIIFM: what’s in it for me. Thus, our messaging has changed to address this — improved quality, improved reliability of the service, improved security, and expanded functionality.”

The good outcomes of the University of Regina’s print optimization project weren’t achieved overnight, but the transformation they add up to is remarkable. With the execution phase now in its eighth year following the award of a second five-year contract to WBM Technologies in April of 2015, the in-plant overseeing the program can point to:

Konecsni says that right-sizing the number of devices to the needs of the areas using them has led to additional cost savings of almost $100,000 per year over the original plan. The keynote of it all is that the in-plant holds the reins — to the university’s advantage as well as to its own.

The shop, staffed by seven of the Information Services unit’s 36 employees, operates a complement of digital production printers that includes a Ricoh Pro 1357, a Ricoh Aficio MP 9001, an Accurio-Press C2070 from Konica Minolta, and a five-station Kodak NexPress 2500. Although the in-plant does not have right of first refusal, the university relies on its experts to determine whether work should be produced internally or by outside sources for maximum cost efficiency.

The in-plant’s prerogative is also what has made the fleet optimization project a winning proposition for all concerned.

“Having authority over the managed services contract allows us to manage the vendor to a service level agreement,” Konecsni explains. “We also get to set the standards and expectations for new device installation, insuring that the vendor does not oversell us. We review new equipment before it goes to our internal customers to guarantee that the machine is profitable and will not be utilized to rob volume from our in-plant.”

The optimization plan is closing in on its ultimate goal of trimming the fleet to 350 units, and Konecsni and his team are looking into the possibility of printing to them from mobile devices. Management gets regular status reports on progress and benefits.

His main piece advice for in-plant managers with fleet responsibilities is to get and keep senior leadership of the parent entity in their corner.

“There is nothing more influential than the president of your organization standing up in front of the company and promoting the benefits of your program,” he says. Apart from that, “stick to your guns and remove the old devices when you bring in the new — sometimes the short-term pain is easier to mange than the long-term pain.”

Firmness tempered with sympathy pays off, according to Konecsni. Where once some university staff would hide printers underneath desks to keep them from being rounded up, now others are turning in more devices than they were originally asked to part with.

Related story: From the Editor: A Fleeting Opportunity

From the Editor: Observations From Ottawa