Fifth Inkjet Summit the Best Yet

In-plant managers were everywhere at the recent Inkjet Summit. Almost 30 of them from 24 different in-plants joined more than 100 other printers at the Ponte Vedra Inn & Club near Jacksonville, Fla., to learn about production inkjet printing.

From the moment that conference chair Marco Boer, of I.T. Strategies, started to speak on Monday evening during his opening keynote, enthusiasm about inkjet technology began to climb. Since 2008, he asserted, continuous-feed inkjet pages have grown at 73% CAGR.

"It's a market that's truly unstoppable at this point," he said.

And of in-plants, he had this to say to the crowd: "The in-plants are becoming far more sophisticated. They're ready to look at inkjet."

Indeed, several in-plants at the Inkjet Summit have done more than look. IPG's Bob Neubauer interviewed a panel of four managers that have installed inkjet presses in a session that several attending in-plant managers called the best one of the summit. The managers detailed their successes and struggles with adopting inkjet, giving managers in the audience a lot to think about. 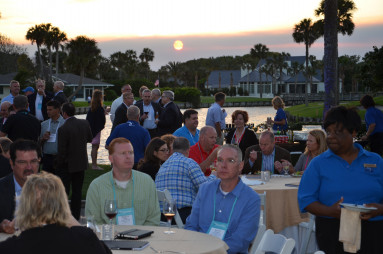 As the sun set Monday evening, attendees dined outdoors at the opening reception, on a surprisingly chilly Florida evening.

Most of the 130 printers at the invitation-only event have yet to take the inkjet plunge, but it’s safe to say that they’ve returned to their companies with fewer reasons for delaying the decision. This is because much of what they heard about production inkjet at the Inkjet Summit came from their peers: printers who have reinvented not just their production routines, but their entire business models by installing high-volume color inkjet presses.

These success stories, delivered in case-study workshops, user panel discussions and one-on-one meetings with systems vendors during two-and-a half days of intensive learning, confirmed production inkjet’s status as a transformative and disruptive technology — in the most encouraging sense of those words. 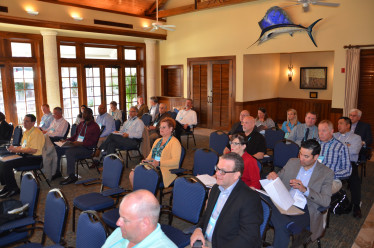 Some of the in-plant attendees at a breakout session for in-plants. Overall, 30 managers from 24 different in-plants attended the 2017 Inkjet Summit.

It’s a narrative that the Inkjet Summit has been shaping with increasing effect for the last five years but, even so, it would be a mistake to exaggerate the extent to which production inkjet has taken hold in the industry. Data presented at the event by Boer indicated that by 2020, digital printing technologies of all kinds will still account for less than 5% of pages produced. I.T. Strategies reckons the installed base of production inkjet presses in North America to be about 600 devices at 250 locations.

That’s a small base to build upon. But, if the history of graphic communications technologies teaches anything, it’s that when an emerging solution truly improves upon methods presently in use, movement toward it can be disconcertingly rapid. 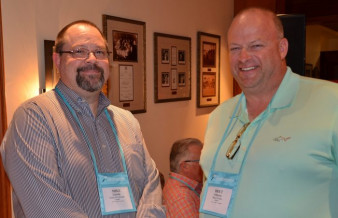 A case in point is Liturgical Publications, in attendance at the Inkjet Summit and the subject of a case study and other mentions during the program. For years, the company printed Sunday church bulletins for about 4,100 congregations in a conventional production workflow that can only be described as frenetic: 28 million pages per week on 27 narrow web offset presses in four-color runs averaging 12 to 13 minutes each. This involved burning 23,000 polyester plates per month and throwing away large quantities of paper in the endless makereadies.

Liturgical Publications built a $65 million business on this model and probably could have gone on in the same way — until it realized that there was an irresistible time- and cost-saving alternative in production inkjet printing. Today production is almost 100% digital, with five inkjet web presses shouldering most of the workload. At one plant, two of these presses have replaced the output of seven offset machines with capacity to spare. A single operator can run two digital presses, eliminating the need for 16 offset positions. The end-of-week production crunch has become more manageable, paper waste is down and print quality has improved as well.

Watch for IPG's continuing coverage of the Inkjet Summit in the weeks ahead.

If you are interested in attending the 2018 Inkjet Summit, please complete this interest form.