From Commercial Printer to In-plant Manager 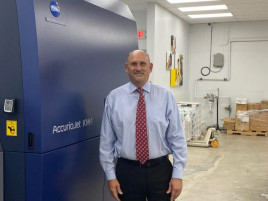 John Bartik didn’t start off in the in-plant world. The director of Operations at Western & Southern Financial Group’s Print, Mail and Fulfillment department spent the first half of his career falling in love with print in a very different segment: commercial printing.

Born in Chicago, Bartik moved to Ohio as a child when his father’s job transferred him there. He attended a vocational program at Patterson Co-op High School that paired juniors and seniors with local businesses. “Mine was a printing company,” he says, “and I was kind of hooked.”

That first job was in a commercial print operation called Printing Service Co. in Dayton. Bartik started off his full-time career as a “mail boy,” and 15 years later, when he moved on, he left as the assistant general manager of the plant. He worked for two other commercial printing operations after that, expanding his knowledge and skillset, and learning about new technologies as they came to market. Then, 10 years ago, Bartik says the in-plant world came looking for him.

“They found me,” he says. “I had just bought a house, and it was far away from downtown [Cincinnati], but they made me an offer, and I finally said ‘I can’t turn this down.’ It took a lot of convincing to get me to move, though. They brought me in for a tour of the operation, and I decided to make the move.”

But it wasn’t an immediate sell. In fact, Bartik says he turned the recruiter down at first, but the company was persistent in wanting him to come on board as its new manager. The director of recruiting at Western & Southern Financial Group actually reached out to find out why he was turning them down, and convinced him to come in for the tour, which is what ultimately changed his mind.

“Once I saw the equipment, I said ‘O.K., this is a legitimate commercial printing company.’ And it’s been a wonderful place to work,” he says.

In many ways, Bartik notes that the worlds of traditional commercial printing and in-plant printing are similar, but he points out that there are different pressures involved. One of the first projects he tackled after joining the company was to eliminate all outsourcing, which required purchasing new digital and wide-format printers to increase the types of services the in-plant could offer.

“I came in with an outsider’s perspective, and I have a little different viewpoint on outsourcing work,” he explains.

From there, Bartik spearheaded the addition of services such as a digital storefront to make it easier for all of the stakeholders in the company to order what they need, when they need it. Today, he estimates that about 98% of the work the in-plant produces is digital. This prompted him and his team to get rid of the shop’s four-color offset press when the in-plant relocated to a new building last year.

“The runs were getting shorter, and we were encouraging the storefront. It helped us realize that we don’t need to print and inventory quite as much — the habit was to get a six- to eight-month supply on the shelf to get the cost-per-piece cheap, but then these materials become obsolete and end up getting thrown away.” Now, the in-plant only keeps about a month’s worth of inventory, and far more of the work is printed on demand; some is even personalized for the agents.

That work includes a range of projects, from booklets and brochures, to kits and materials for field agents. And pocket folders; “we love pocket folders as a company,” Bartik jokes.

In addition, a few years ago the in-plant started providing promotional materials, since many agents were buying those items outside the company to hand out. Now the in-plant produces items such as tee-shirts and coffee mugs on demand. They are available through the digital storefront as well.

Part of what makes the in-plant so attractive, Bartik notes, is that where the commercial print world has experienced turbulence over the past decade, his in-plant operation has been steady and solid. And his operation, in particular, has worked to keep updated with current technologies to ensure his staff has the tools they need to succeed and be productive. Recently, for example, the shop installed two production inkjet presses — a Konica Minolta AccurioJet KM-1 and a Xerox Brenva.

On top of all that, Bartik says the company itself is a pleasure to work for, treating the in-plant as an integral part of operations. The CEO, he says, toured the new facilities once the in-plant moved and praised the operation for its hard work and dedication. Before the COVID-19 pandemic forced operations to change, the company made arrangements to shuttle the in-plant staff to the main buildings every day for breakfast and lunch, which are provided to every company employee as a perk. Even during the pandemic, the company is making sure food is delivered to Bartik’s staff when they can’t all be together. That kind of thoughtfulness and corporate culture makes working at Western & Southern Financial Group even more motivating.

While Bartik notes that the mix of a great working environment and great technology to work with means that he doesn’t have very high staff turnaround, he does occasionally need to bring in new hires. When that happens, he stresses, he doesn’t just toss them into the mix.

“Anyone coming in, we pretty much figure on six months of training,” he says. “We don’t throw them in too quickly.”

Once on board, the employees are encouraged to contribute to the operational excellence program as well. Boards around the operation entice employees to post ideas, comments, suggestions, and problems. Small groups of five to seven people then meet every other week to go over everything posted on the boards, document the suggestions, and assign any tasks that arise from them.

“It rarely goes to management,” he notes. “Usually someone in the group will take on the task and solve the problem. It could be minor, or it could require reaching out to someone else in the company for support. But the process keeps everyone pretty engaged, and it’s really encouraging.” He stresses that just because something has “always been done that way, doesn’t mean it’s the right way,” and having his staff be involved in those decisions helps create a very friendly and welcoming place to work, which is something he prides himself on.

“I would say I’m most proud of my people,” he reveals. “They make getting the work done so easy. Even though it’s an in-plant, we don’t take the work for granted; our internal customers aren’t necessarily captive, so if we don’t produce the high-quality work or have the turnaround they need, they could go outside and buy print. We look at it as we are in competition with the local printers.”

Bartik doesn’t just spend all of his time in the shop, however. He is on the board for the Graphic Media Alliance (an affiliate of PRINTING United Alliance), the print association for Ohio, Michigan, and Northern Kentucky. That organization presents annual awards as well, and he notes that the in-plant typically does fairly well going head-to-head with commercial printers in the region and taking home at least a few awards every year.

Outside of work, when he’s not participating in local Ford Mustang club events, Bartik’s favorite hobby is golfing. Since it’s already a socially distanced sport, he points out, he has been able to do even more of it during the pandemic shutdowns. And in fact, he notes that his wife Lynette of four years has even started to play, making it an activity he can now share with his significant other.

Bartik has four children, two from his first marriage, and his wife’s two children. They have five grandchildren, with another on the way, and he notes that none of the children or grandchildren, sadly, have shown any interest in the print industry.

Looking back, Bartik has no regrets about becoming a printer, believing he made the right choice when he took a leap of faith a decade ago and let a recruiter talk him into coming to the in-plant world. He loves his company, his operation, and his employees, and is proud of where they have been, and what the future holds for them.