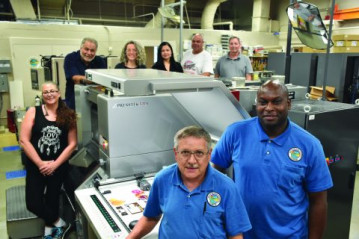 As in-plants continue to replace their offset presses with digital toner printers, one in-plant has moved in the opposite direction. Palm Beach County’s Graphics Division in Greenacres, Fla., has swapped its Canon imagePRESS C7010VP for a Presstek 52DI digital offset press. After a lengthy research and procurement process, the Presstek 52DI was installed in June.

The nine-employee in-plant had two Canons on two separate leases, but had to replace the Canon C7010VP as one lease ended. After months of research, during which the in-plant considered a ­variety of devices, it chose to go with the Presstek 52DI.

While going from offset to digital may be the industry norm, Manager John D.L. Johnson feels the Presstek direct imaging press is similar to a digital printer and fits the department’s needs better.

“I would say that we actually changed from a digital xerographic [printer] to a digital offset press,” Johnson explains. “The Presstek DI is very similar to a digital xerographic machine because you download the documents into the control workstation that comes with it and you [send] the document into the press. It laser images the plates on the cylinder and you then offset print from there. So, a lot of the functions that we had previously done with the Canon’s digital workflow, this fits right into that.”

Johnson did consider digital inkjet presses when the division was doing its research, but he and his team were not convinced the capabilities suited them.

“We had gone to some of the trade shows and we had looked at the inkjets. Most of that research was a year ago and older,” Johnson says. “We did not think that the inkjet [technology] was at the point to be able to do high-quality coated jobs.” 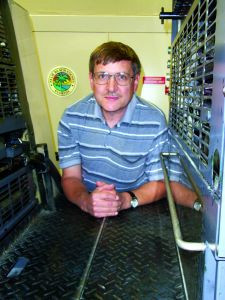 One of the justifications for purchasing the DI press as opposed to a digital device was that a considerable portion of the in-plant’s work is long run, which usually had to be farmed out in the past. Ultimately, Johnson felt that some of the shop’s work was meant to be offset work, which helped fuel the decision to go with the DI press.

The in-plant made that decision in mid-2017, and aimed to have everything completed by November or December, but things did not go as planned. The purchase from Presstek dragged out until March. Then, just before the in-plant was due to get approval from the board of county commissioners, Johnson found out that Presstek was going to be acquired by Mark Andy.

“All the work we had done to get a contract together and make the deal came to a screeching halt when Presstek was taken over by Mark Andy,” Johnson says.

The acquisition by Mark Andy forced the graphics department to rewrite a lot of the paperwork and restart the process. Eventually, once everything was in order, the shop got approval to purchase the Presstek 52DI from Mark Andy. It was finally delivered on June 18, and the in-plant has been happy with the early results.

“Once the library found out that we got this new four-color process press, they wanted to upscale their monthly newsletter,” Johnson says. “Now, it’s four-color process, and they added more pages. It went from 16 pages to 32 pages. We’ve done three issues for them like that, and it’s been good for us and good for them.”

Despite bucking industry trends by going from digital to offset, Johnson believes the in-plant made the right decision. He is happy with the results so far and expects more of the same in the future.

“We have a lot of work that is not variable data and that are long runs. I think we can quite easily support the offset press to do that kind of work,” Johnson says. “It’s an investment into our future, and I think it’s a good investment.”

Following His Own Track

The INg Conference Showed How Nothing Beats Face-to-Face Meetings
END_OF_DOCUMENT_TOKEN_TO_BE_REPLACED
Upcoming Webinars
The “Rolling 20s” Are Here: Are You Ready?