From the Editor: In-plants Unite in Dallas

I felt like I was back at a trade show in the mid-’90s, so packed was PRINTING United with people and exhibitors. Booths stretched off into the distance as far as the eye could see, making it a daunting prospect to walk from one end to the other of the massive Kay Bailey Hutchison Convention Center in Dallas. (I did it, though.)

As I dashed from meeting to meeting, I found I couldn’t go more than a few steps without running into someone I knew and stopping for a quick chat. Much of the time, those people were in-plant managers — perhaps not so surprising considering that hundreds of in-plants attended the show. 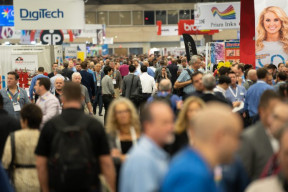 Many came to the three in-plant forums IPI hosted. We picked three very different topics for these: wide-format printing, promotional product sales, and workflow automation. Evidently we chose well because the turnout at those sessions was fantastic.

In the first, Michael George (Villanova University) and Roy Nance (University of North Texas) showed images of graphics their shops have printed and installed, and went into detail about how they were produced. I had visited UNT the day before the show and taken a close look at the HP Latex 360 and Mimaki flatbed printer that Roy’s in-plant uses to print its wide-format projects. The shop also has a Colex contour cutter to automatically cut out name badges or decals from large sheets of material.

Full house for our wide-format in-plant luncheon at @PrintingUnited. Mike George of @Villanova and Roy Nance of UNT are presenting. pic.twitter.com/qM9RqO0nzP

Early on the second day of the expo, in-plant managers met again for our second forum. A panel of three managers answered my questions on the ins and outs of selling promotional products. Sherri Isbell (University of Oklahoma), Richard Beto (University of Texas-Austin), and Melynda Crouch (Texas Tech University Health Sciences Center) were extremely knowledgeable on the topic and covered both the reasons their peers should get into this business (e.g., ensuring accuracy of the organization’s branding) and the benefits it can bring (e.g., a half million or more dollars of extra revenue). It was an excellent session. 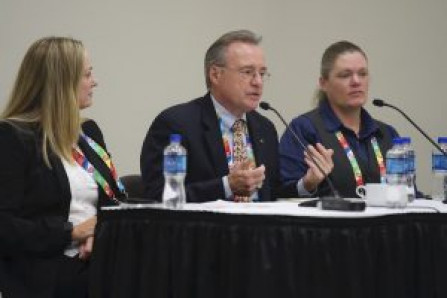 Just a few hours later, three managers from Frisco Independent School District took the same seats and described how workflow automation has turned their in-plant around. I was fortunate enough to have visited their nearby operation the day before PRINTING United with Roy from UNT (whom I can’t thank enough for his chauffeur services) and saw first hand how efficiently it runs. Their operation utilizes about a dozen Xerox digital presses, yet there is none of the chaos you might expect from an operation that is churning out 2,500 jobs each day.

Thanks to the shop’s Web-to-print and other automation software from Rochester Software Associates, jobs are barely touched until they hit the output trays, at which point the operators just scoop them up and put them in bins for delivery to the district’s 72 campuses. It’s a well-run operation, and attendees of our lunch forum got a chance to hear all about it.

I tried my best to talk with managers as they dined at our forums, but it was a tough task with everything going on. I had a little better luck at the two in-plant receptions that took place during PRINTING United. First, the Texas Association of College and University Printers (TACUP) gathered for dinner the night before the show (with ex-UNT Manager Jimmy Friend making a surprise appearance). Then on day two of the event, the In-plant Printing and Mailing Association (IPMA) held a lively reception. Both drew dozens of managers for some enthusiastic networking.

From the comments I’ve been getting, in-plants were extremely happy with PRINTING United and are looking forward to its follow-up appearance in Atlanta, Oct. 21-23, 2020. 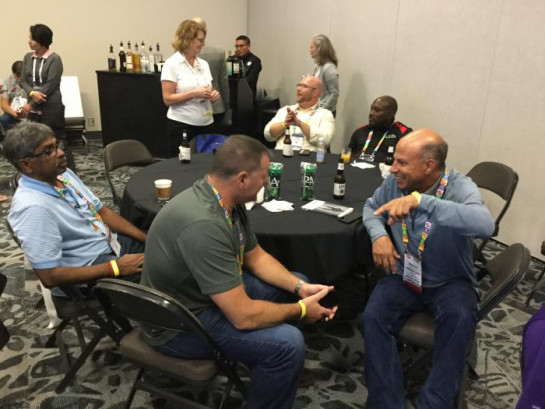 Managers chat during the IPMA reception.

The Wide-Format Evolution of In-Plants