Gayle Robinson’s job as print shop production manager at Tanner Health System in Carrollton, Ga., is actually the second in-plant position she’s held — although it didn’t occur to her that the first one was at an in-plant until many years later. 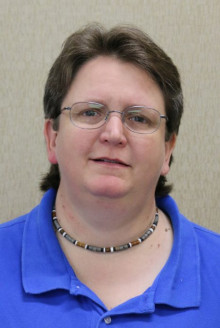 Robinson did not have a background in print when she began her career. With a bachelor’s degree in mass communications and a minor in art/photography from West Georgia College (now the University of West Georgia), she started her journey as the manager of a photo shop. One of her customers was an HR manager for CBS Records, which later became Sony Records. That manager became a regular customer, bringing in rolls of film and getting to know the staff.

“She liked our work, and liked me and the other girl who worked there,” says Robinson. “So she hired both of us. She hired me right into the print shop, and I was there for a little over three years.”

There, she notes, her work included burning plates to print the record labels for vinyl albums and 45s. She was also involved in composing and typesetting the album labels and cassettes.

“And then I fell in love and moved to Kentucky,” she recalls.

Robinson’s career moved away from print, but she was still connected to the industry, working for another photo shop developing film, and then later, when she moved back to Georgia, getting a job with a local newspaper running its camera department, including handling color separations for the photos that would appear on the front page.

“I was at the newspaper for four years. But then my dad had retired, and my mom was looking for a reason to escape the house,” she laughs. Together, they looked around and realized that in their small college town of Carrollton, there were no color copiers for the public to use at all; students had to go into Atlanta, she says, which is what she did when she was attending West Georgia College.

“So I said, ‘Why don’t we open something accessible for college kids to come do their work?’ Commercial print shops aren’t open to kids coming in and getting in their space,” she says. “So we opened a small-town version of a Kinko’s, where the people were friendly and invited you in to do your stuff.”

That shop offered both color and black-and-white copies, and boasted the only blueprint copier available for general use in town. Applications included everything from art projects, to business cards, to letterhead, and more. At one point, Robinson says, they even considered opening a second location.

But then September 11, 2001, changed the landscape, followed by the 2007-2008 recession. “It just never seemed to be a great market to try and franchise,” Robinson notes. “Especially in a small town in the middle of nowhere. We’re about five minutes from the Alabama line, but we’re much bigger now — we actually have a Staples in town now! We’ve even got one of those Super Walmarts — that’s how you know you’re coming up,” she laughs.

While the recession was taking its toll, both of her parents had health scares. While they recovered, she says, it was time for her mom to take a step back again, especially since the leases on the building and equipment were coming to an end. It seemed like a good time to move on. So Robinson started looking for her next opportunity.

Back to the In-plant World

That opportunity came in 2007 in the form of an opening at Tanner Health System for a press operator.

“The current manger was retiring in a year, so they wanted someone with experience with vendors, contracts, etc. Someone who did their research on equipment. Someone to step into her shoes as soon as she retired,” she says.

But instead of a year, just a few weeks after Robinson started her new role, the manager went out for a major surgery, taking her out of the shop for several weeks. Then a second surgery laid her out for a few more, followed by further health complications.

“So it ended up only being five months before she was retired, and I was in charge,” says Robinson.

The shop is small; before COVID-19 it was just Robinson and one other person. During the pandemic, the company was forced to let the second person go. (“I’m the boss of myself now,” she jokes.) And while things have begun to pick back up, Robinson notes that it’s still not back to levels that would require bringing a second employee back full time again.

All printing is currently being run on the digital printing equipment. This includes forms for the nursing floors, business cards and letterhead, books for expectant mothers, and envelopes. Pre-pandemic, she notes, events generated a lot of the in-plant’s work. Robinson worked with Marketing to produce direct mail, brochures, posters, signage, and other printed collateral promoting those events.

“We’re starting to open back up for a few events, but they’re doing it slowly to make sure the [COVID] numbers don’t go back up,” she says.

Among her accomplishments, Robinson notes that getting her Certified Graphic Communications Manager (CGCM) certification from the In-plant Printing and Mailing Association is at the top of her list.

“I have a degree in mass communications, but there [was] no school to go to for printing” in her town, she says.

One of her biggest challenges upon returning to the in-plant world, Robinson reveals, was coming to terms with the  mindset of always needing to get approval for new equipment.

“I was used to dealing with the outside world, the commercial world, where if you need a piece of equipment, you talked amongst yourselves and then went and got it. It was hard for me coming into a hospital or corporate setting and learning all the ropes you have to jump to get something,’” she admits. “I can do the research, and do the ROI to prove 10 ways to Sunday that it’s what you need, but there’s a lot of paperwork after that, and not just ‘hey, bring me that and write a check.’ It can be very frustrating to me, and it was challenging when I first came here.”

But that hasn’t stopped her from making those changes. When she first began with Tanner, she notes, the in-plant was basically a small copy shop without many finishing options. Over time she has turned it into a full-fledged print shop, moving from “very small color copiers to color production,” Robinson says. That allowed her to run jobs such as booklets on heavier and different varieties of paper that her old copiers couldn’t handle, as well as upgrade the finishing lines to include creasing and scoring machines, a “folder that wouldn’t overheat,” and a cutter that could handle larger stacks. “Things they probably should have had,” she says.

Robinson has also introduced more automation wherever she can to streamline the process and make it more cost effective and efficient, even as the equipment and application mix has evolved over the years.

In fact, that is also her biggest piece of advice to other in-plant managers: “The most valuable thing you can do is automate as much as you can,” she advises. “In the last few years, if I hadn’t automated, I would have had to hire a third, or even fourth, person, but I was able to keep it to a two-person shop. It made things quicker, or I could start something and then go put hands on something else.”

The result, she stresses, is that she can continue to serve her organization with high-quality print, while keeping her budget as low as possible, opening up the potential for more investment in new technologies or equipment.

Robinson’s career path might have swerved a few times over the years, but she found her passion in print. The Tanner Health in-plant operation has grown and flourished under her leadership, a testament to her dedication, hard work, and the sense of humor with which she approaches life. She will continue to face any challenge that might come her way, and come out ahead with a smile on her face.