Update: Since reporting the article, the coronavirus has closed Omaha Public Schools. Printing & Publications Services was called into action to print lesson packets for elementary and special education students. In-plant employees worked seven days a week for 18-20 hours per day using both the Xerox Brenva and Baltoro inkjet presses. The massive volume of pages (2.6 million) ultimately forced the in-plant to get assistance from a commercial vendor to complete the job. The operation continues to use its inkjet presses to print packets for pickup by parents.

In 2018, Omaha Public Schools Printing & Publications Services installed its first inkjet press, a Xerox Brenva. It proved to be such a great investment, that the in-plant recently decided to replace its remaining toner printers with a Xerox Baltoro, the updated version of the Brenva, and make the switch to an entirely inkjet platform. The new press was on target to be up and running at full capacity by the end of March 2020.

One of the key reasons for going all-in on inkjet was to give faculty and staff at Omaha Public Schools all the color they want and need, without driving up the costs the way that toner-based color would.

“The importance of color in a document has always been known,” says Steve Priesman, manager of Printing & Publications Services. “There have been countless studies that people get and retain the information to a higher degree if there is color involved, children especially. Color can sometimes just be used to make it pretty, and there is nothing wrong with that, but it can also really help get the point across.”

The problem, Priesman notes, is that the cost of that color was prohibitive for many of the applications that came into the shop. Pieces such as charts and graphs, or illustrations, benefited from color, but the in-plant had to put a 10-25% premium price on it, making it difficult to justify for many divisions.

“It was always a cordial discussion, but they would say ‘no, I didn’t realize it would cost that much. I don’t want to spend that money. Print it in monochrome,’” he says. “When we added the Brenva, however, cost was no longer an issue. Demand for everyday color skyrocketed.”

After installing the first inkjet press, the in-plant began using a tiered printing system, with monochrome jobs mostly still going to the toner equipment, but color being offered at either the “everyday color” rate (printed inkjet) or the premium color rate (printed on toner equipment).

To help educate the school district on what the color options were, Priesman put together a marketing piece that went out to every principal, detailing the cost breakdown for each type of printing. The result was that, across the board, even the least tech-savvy could see the benefits of being able to run full-color work for the same price as monochrome.

Needless to say, it became a popular request so quickly that some work had to either be moved back to monochrome and run on the Xerox Nuvera, or it had to get “prestige color” on the toner equipment for an up-charge if the job couldn’t be pushed back on the schedule. Priesman had hoped to transition the toner equipment into more of a backup role, but it wasn’t working out that way.

“The overall workload was such that [the toner equipment] wasn’t just being used as backup,” Priesman says. “We were using it for heavy production as well. We had around 1-2 million clicks per month on the Brenva, but we also still had another million on the toner equipment as well.”

Clearly, the time was right to add the Xerox Baltoro.

Today, Omaha Public Schools has approximately 54,000 students, and one example of how inkjet is changing the way the organization uses color is the information sent out to the more than 20,000 of those students who receive transportation through the district. 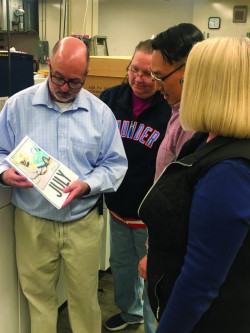 “We have a mailing that goes out every August to every parent of a student that receives transportation,” Priesman says. “It shows the exact time and location for where the bus is every day. In some cases that might be at their address, but sometimes it’s a block away. We look at safety, routing, etc., and pick the stops, and it’s our job to communicate that.”

The result is a variable data piece that isn’t possible on offset, and while he can produce it in monochrome on the toner equipment, “inkjet can do more. We can put more information on the documents, and maybe we even add a little map — I have no idea if that would be helpful to the parents, but the technology is there so we can do that, and do it in color.”

One thing that held Priesman back from going all inkjet was the occasional need to run coated stocks, which the Brenva couldn’t handle. However, he says, although the platform is the same and the machines look similar, there have been enough improvements and upgrades to the Baltoro that he decided it was time to make the final push.

“Visually the two presses look the same,” he proclaims, “but they made a lot of improvements. Among them is the ability to handle coated stocks. It still has to be silk or matte, rather than glossy. It’s related to the drying capabilities; the process just doesn’t lend itself to gloss coatings. But I’m hearing through the grapevine that someday that may be changing. Who knows? Xerox will continue to evolve their equipment.”

As of early March, the new Baltoro was on site, and was in the process of being installed, and the operators trained. Already, Priesman says, the operators are starting to fight over who will get to run the new equipment.

“The Brenva was Xerox’s first high-volume inkjet sheetfed product, and over time they learned things and made improvements, some of which directly impact the ease of use,” he says. “The pains an operator has to go through have been lessened, and they came up with things to make the job easier.”

In fact, even during the installation process, Priesman notes that the shop started to run live jobs. The quality and ease of use were so strong, rather than waste paper with test prints, he made the decision to start pushing some real work through it.

As soon as the Baltoro is completely up and running, Priesman says the shop will be taking out the remaining toner equipment. One of the few jobs that might still need toner would be a gum label application, which he notes that, due to the water in inkjet inks, he wouldn’t want to run on that platform. But since it’s been several years since that has come up, he feels confident that going all inkjet is the right decision.

“Should I have an unforeseen need [for toner], I can outsource it,” he says.

Before making the leap into the world of inkjet, Priesman took the time to learn everything he could about the technology and how it would impact his business. To do that, he attended Inkjet Summit in 2018.

“I was intrigued. I have been in printing my whole life, and I wanted to learn more,” he says. “I learned so much, I actually came away more enthused about the future of printing than I had been in probably 20 years.”

Seeing how far inkjet has come, and its ability to replace smaller offset equipment, while providing additional abilities such as variable data and shorter runs, was eye-opening. He also noted that staffing was starting to become an issue for some of the in-plant’s older offset equipment.

“Community colleges and trade schools aren’t training offset printers very well anymore,” he says. “I had no staffing problems at the moment, but down the road it will be harder to find someone without having to train them from scratch — and I don’t want to have to teach them offset.”

On the other hand, he notes that the requirements and skill levels to run the inkjet presses are entirely different, and are far more easily taught. He points out that it could easily take six months to a year to train even a journeyman offset press operator. Inkjet, however, can have someone up and running in a week, if not days.

“Knowing the staffing issues made me feel it was the right time to start exploring the technology in detail,” Priesman notes. “Inkjet Summit was the first step; I heard from manufacturers and users, and that was the best thing. I got to hear from people already doing it, both the pros and the cons. No one product is perfect for 100% of the applications.”

He was able to network with several in-plants of various sizes and types to hear about what equipment they went with, and how it worked for them. It helped him ultimately decide that the cut-sheet, rather than roll-fed, equipment was the right fit for his operation, and further that the Xerox platform was the right one for his application mix.

Priesman attended the Inkjet Summit again in 2019, this time as a panelist to share his own experiences and pass along what he has learned, just as he learned from others the year before.

For Priesman, it all comes back to looking ahead to the future, not just of his in-plant, but where print in general is going. Variable data is growing, and will only continue to grow; run lengths will continue to decrease; and the demand for full color will rise as well. Digital technologies will only capture more of the market over time, not less, and while there is still a place for toner, he notes that everything from the cost to even having less downtime on his inkjet equipment was a strong enough proposition to make it the right choice for his operation.

Omaha Public Schools Printing & Publications Services is a shining example of an in-plant evolving, so it can remain relevant to the changing needs of the overall operation, no matter where it might go next.