A Half Century of ACUP

The Association of College & University Printers recently held its 50th annual conference, bringing higher-ed in-plant managers from around the world to Portsmouth, VA.

When a handful of college and university in-plants got together at the University of Virginia back in 1965 and declared themselves the Association of College & University Printers (ACUP), they had no idea what they were starting. Over the past half century, their group has educated hundreds of in-plant managers, and evolved into a close community of higher-ed printers for whom sharing ideas has become second nature.

In April, that group met for the 50th time, convening in Portsmouth, VA, not far from that very first meeting. Nearly 100 managers from 75 institutions made the trip. None left disappointed.

“I’m sure our founding members would be proud to see all of you here,” remarked ACUP President Lisa Hoover in her opening address to the crowd.

Though none of those founders were present, this year’s event attracted ACUP members who have been with the organization for more than 20 years, as well as 22 first-time attendees. Managers came from as far away as Australia, Scotland, Canada and Alaska, with a significant number of California managers making the trip east. Several who hadn’t attended ACUP in years returned this year, and two managers from brand new in-plants were there to share their stories. 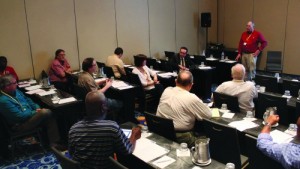 Ray Chambers leads a discussion on MFD
fleet management, during which he talked
about the rise of “managed print services.”

The agenda offered plenty of opportunities for managers to talk shop, whether in the large vendor exhibit area or during a lunchtime riverboat cruise on the Elizabeth River. Several of the sessions were structured to facilitate group discussion, with members sharing their experiences and questioning one another on topics like Web-to-print, niche services and reporting structures.

Since 2012, ACUP membership has grown 31 percent, and now boasts nearly 200 members from 136 institutions. Members discussed ways to increase that count during the business meeting, including by adding K-12 school district in-plants and partnering with university mailing associations.

Managers assemble for a session on the second day of ACUP.

In the opening session, Ed Danielczyk, president of Business eXcellence Consulting, noted that in these times of dropping enrollment, administrators are looking carefully at services to decide which ones are adding the most value. Managers need to show the in-plant is a core service, he said, by stressing the essential part it plays in helping the university fulfill its goals of attracting and retaining students and encouraging alumni contributions.

Some universities, he said, are employing a strategy similar to a Jenga game, in which pieces are removed from a structure to see if it will still stand without them. Universities are removing programs, and if there is no major impact or protest, then it stays out. Danielczyk said managers must interweave themselves so well that removing their in-plants will cause big problems. Have so many advocates among your customers that there will be loud protests if the university tries to remove you, he advised.

He noted that proposals from outsourcing providers don’t talk about quality or productivity, rather they stress cost savings, continuous improvement, security, business continuity, innovation and environmental sustainability. These are the areas in-plants should be focusing on as well, he said.

In another session, ACUP stalwart Ray Chambers, president of Chambers Management Group, discussed MFD fleet management and which questions managers need to ask before taking this on. Don’t proceed without compiling a summary of the MFDs in place at your organization and their historical volume. Make sure you detail your expectations: machine features, functionality, cost-per-copy pricing, pooled volume, meter reads, etc. He recommended using pooled fleet management, where output from all machines is combined into a single pool, which is reconciled annually.

When evaluating proposals, he said, select the two or three with the lowest overall cost per copy, and allow each vendor to make a one-to-two hour presentation. Require each finalist to provide a demo machine for at least a week and encourage users to “kick the tires.”

Chambers also discussed the rise of “managed print services” in which equipment vendors offer to perform a “detailed” analysis of your organization’s printers, including your in-plant’s production printers. Vendors will make many claims, but he encouraged managers to ask “how do you know that to be true?” He then went over some of the myths of MPS, including that an MPS program can save 10 to 30 percent. If the MPS provider doesn’t know the operating cost of your machines, he noted, how can they predict savings?

Yale University’s Jeff Gworek spoke about the benefits of managing the MFD fleet in another session.

“If you don’t have multifunction printers under your control, you’re missing out on a great revenue source,” he noted. His in-plant controls 99 percent of the devices on Yale’s campus, which is about 1,300 machines.

Through PaperCut, the software program used for monitoring print, departments get a usage report for all their printing devices.

Always looking for additional revenue streams, Yale Printing and Publishing Services is exploring a move into e-publications. The in-plant would provide PDFs embedded with rich media, such as videos.

Another value-added service discussed in sessions was garment printing. Theresa Roby, of Pennsylvania State University, and Cathy Skoglund, of Arizona State University, detailed their dye sublimation printing capabilities, which enable them to print personalized T-shirts as well as coffee mugs, smart phone cases and metal signs. (Penn State printed the ACUP conference badges on a thick plastic material with its dye-sub printer.) It’s an inexpensive service to get into, they said, requiring just a printer to create the transfer sheets and a heat press. While Penn State is using its dye-sub equipment mostly to help market the in-plant, Skoglund sees this as a new revenue stream and hopes to eventually sell items to the ASU community through Web-to-print channels.

Attendees listen to the opening speaker on the first day of the conference.

Other niche services discussed in an informal roundtable, led by Dave Hadenfeldt of the University of Nebraska, were pop-up banners, promotional products, flash drives, passport photos, shredding and 3D printing. Hadenfeldt’s in-plant has been providing 3D printing for more than a year and it has brought favorable attention to his shop, he said. The in-plant uses a MakerBot Replicator 2 to create a variety of items requested by customers, such as art tiles, battery holders, planes, jewelry and more.

Naomi Quiram, of Gustavus Adolphus College, led a session on merging print and mail services. She stressed the importance of building a cohesive team. Take time to understand the blended team’s strengths, weaknesses, communication style and training needs, she said. Clearly define everyone’s roles to create trust and minimize conflict. At her operation, print and mail staff hold a 10-minute stand-up meeting every morning to discuss the day’s jobs and make sure everyone’s on the same page.

Another session on mail, moderated by Chuck Brantley, of Ringling College of Art and Design, covered operational challenges in the mail center, such as software upgrades, equipment replacement, staff training and ongoing changes in USPS regulations.

In one very memorable session, IPG Editor Bob Neubauer asked a panel of six vendors questions submitted by ACUP members on a variety of topics, from equipment features to trends in digital printing. But it was his questions on the facilities management practices of some vendors that drew the most attention (and applause) from the audience. 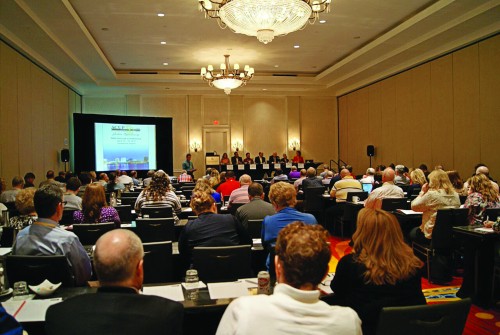 In perhaps the most heated session of the conference, IPG’s Bob Neubauer questions a panel of vendors about their services, equipment and facilities management practices.

At a session on marketing, Richard Beto of the University of Texas at Austin told the crowd about the open houses, lunch-and-learn meetings, barbecues and other get-togethers his in-plant hosts to forge relationships with UT faculty and staff. The in-plant’s Christmas luncheon is one of the most popular events on campus, he said.

He and his staff give presentations at the university’s Town Meeting, a semi-monthly gathering of staff and representatives from administrative offices. They are also involved with various committees on campus, as well as administrative support groups. This keeps the in-plant fresh in everyone’s mind.

In the same session, Lora Connaughton of the University of North Texas talked about her in-plant’s success selling promotional products, which it buys directly from the manufacturer. The in-plant’s website has a catalog of 950,000 items, and three full-time staff members market promotional items.

The shop generates about $500,000 a year from this service. The in-plant runs a promotional buyers’ workshop to teach customers how to use promotional items effectively and avoid mistakes.
The conference ended with an awards dinner during which several in-plants were honored with ACUP Awards for print quality and management initiatives. Next year’s conference will take place April 10-14 in Albuquerque, NM.

Related story: From the Editor: The Value of Adding Value