If you’ve ridden a train or a bus in Chicago, chances are you’ve been directed by signage produced by the Chicago Transit Authority’s busy in-plant.

A metropolitan transit system may have an extensive network of stations and stops, a well-maintained fleet of train cars and buses and ample resources for passenger comfort and safety. But no matter what else it has to offer, a transit system can’t be truly commuter-friendly unless it’s reasonably easy to navigate — and it can’t be that without an abundance of printed signage.

No in-plant operation serving a transit system understands this better than the one that furnishes signage for the Chicago Transit Authority (CTA). If a schedule changes, a train takes a different route or a station exit moves, it’s up to this small but highly capable group to make sure commuters have the visual materials they need to keep them traveling securely on their way.

Employing about two dozen people, CTA’s in-plant consists of four facilities in and around the Chicago metro area. The planning and design for most of the system’s commuter-facing material takes place in the Signage & Wayfinding department at the headquarters office in the West Loop, which also houses another division of the in-plant, its reprographics center. The other two sites are a rail maintenance shop and a bus maintenance shop that do a limited amount of sign making with wide-format inkjet equipment.

The collective mission is to ensure that CTA’s wayfinding signage stays accurate and timely — no job for the fainthearted in a system with 10,813 bus stops and eight rail routes comprising 145 stations. Each waypoint is thick with various kinds of signs that, sooner or later, become outdated and have to be replaced. 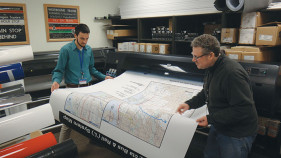 Michal Wyka and Antonio Buccini check the quality of a backlit print of a CTA system map produced on a 60˝ HP Designjet Z6100ps.

“You have no idea of how many signs there are in a train station until you actually count them,” says Bruce Moffat, manager of the Signage & Wayfinding department. Station name signs, trackside signs, timetables, route maps, exit markers and notices in Braille could add up to 100 pieces at some locations. Formats range from decals and posters to 100˝-wide banners hanging above turnstiles. It gives the department “an incredible catch-all” of jobs to plan and execute, Moffat says.

The workload consists largely of design, but not exclusively. Moffat and his team of three also liaise with CTA’s scheduling department to determine what the signs should say and where and how they should be posted.

It’s a complex consultation. Timetable posters, for example, come in 170 different versions that are replaced twice yearly in rail stations and four times a year at bus stops. The task of setting up the timetables for printing is made no easier by having to manually enter information from the scheduling department’s proprietary data management system. 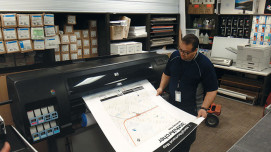 Victor Ramirez checks the output of a CTA Neighborhood Map produced on an HP DesignJet Z6100.

In terms of production, Signage & Wayfinding uses its design software and graphic equipment mostly for short runs and one-off jobs. Victor Ramirez, the department’s graphics production coordinator, has at his disposal two HP Latex and two HP DesignJet wide-format printers supported by batteries of cutters and laminators. He also has an Epson inkjet device for garment printing and, for signage in Braille, a Gravograph IS 7000 engraving machine and a Tiger View-Plus Pro Embosser.

With this equipment, the department can print signage in small quantities on an as-needed basis. Moffat says that when job orders exceed 300 to 500 pieces or when it would take too long to turn around large-format items on the department’s inkjet devices, the work goes to outside printers.

Last year’s historic World Series win by the Chicago Cubs sent the in-plant some quick-turnaround work that it might not have been expecting.

Graham Garfield, CTA’s manager of customer communications, says the in-plant was called upon to produce sandwich board signs for crowd control at the elevated Addison station on the system’s Red Line — the stop for Wrigley Field. Fans riding the Red Line to games three, four and five in vintage train cars brought out for the occasion by CTA saw signs inside the cars celebrating the Cubs’ achievement. These also came from the in-plant.

The in-plant’s business model gives it control over internal assignments like these as well as external production. Garfield says that the in-plant makes the call about what stays in and what goes out by performing a cost/benefit analysis of each project that comes its way. There are no chargebacks per se: work produced internally is paid out of the budget of whatever department of CTA owns the project, and the in-plant has an operating budget of its own.

Garfield says Signage & Wayfinding’s advantage is that its equipment lets it function both as a design studio and as a shop for small-scale production, saving time and money when a need for new signage arises. Besides printing, Ramirez and the designers can mount signage on foam core, fiberglass and metal for indoor and outdoor display. Lately, says Moffat, some signs are being produced for resistance to graffiti, the bane of transit systems everywhere.

Signage & Wayfinding has other specialties. Any time the environment of a station or a stop changes in a way that would complicate its navigability for sight-impaired commuters, the department produces new Braille signage to guide them. The signs with their raised dots are embossed onto plastic for temporary display until engraving of the permanent metal fixtures is complete.

Garment printing is a new venture for the in-plant. It’s limited so far to a few items but is a service that will potentially help Signage & Wayfinding to advertise the CTA brand. The complement consists of an Epson SureColor F2000 DTG (direct-to-garment) printer, a Viper XPT1000 pretreating machine and a Digital Knight DK20S heat transfer press.

The in-plant’s other sections have capabilities of their own. With its copiers and small-format offset presses, the reprographics shop prints forms, stationery, business cards, brochures, flyers and customer alert sheets. Using Roland SolJet Pro printer/cutters, the rail and bus maintenance shops fabricate signs in coordination with Signage & Wayfinding.

If it wished to, the Chicago Transit Authority could hire outside print shops to get all of its printing done. After all, the “Chicagoland” region is home to the country’s largest concentration of commercial and trade printing business. But Moffat and Garfield say that the agency continues to rely on its in-plant because the captive operation offers economies and a level of service that no outsider can duplicate.

“We get a lot of projects out of nowhere, on no notice, that an outside printer could never turn around in time,” Moffat says. He adds that when CTA sends work to the in-plant, there’s no lengthy procurement process to slow things down — just submit the order and look for a quick delivery of the finished product.

The in-plant has the same kind of edge in dollars and cents, according to Garfield. Producing at cost without markup, it doesn’t hesitate to send work outside when the volume justifies it or when that is the most efficient way to complete the job.

Even so, there’s no price advantage to the CTA in doing business with outside providers. Analysis of the costs of external vs. internal print spending usually shows that “it’s a wash, or cheaper, favoring us,” Garfield says.

Understanding the Relationship Between Digital Textile Printing and Coatings