To improve your workflow, start by process mapping the way you do things now, then identify actions that are no longer necessary. Eliminating wasteful processes will make your in-plant leaner.

As a manager of an in-plant, or of any service that relies on a series of steps to produce its goods, you are constantly looking for ways to improve workflow. Whether to keep up with demand or to reduce costs, improving the way tasks are carried out pays dividends.

Although it’s tempting to try to solve workflow efficiency issues by purchasing new high-tech equipment, this doesn’t always work. Rather than focusing on individual elements, a manager must look at the entire process to understand where the issues are. Focusing on one area can ignore serious problems in other parts of the process. Therefore, a global approach is required when addressing workflow improvements.

Recently I was involved in implementing job automation software for a client, an in-plant that provides services to a large public organization and also insources from several external clients in its network. Located on the ground floor of an office building in the center of Montreal, the in-plant is well-equipped with a Xerox Versant 2100, a Nuvera 144 EA, a D125 and a DC700 all running off Xerox Freeflow servers. It has two wide-format printers: an older Xerox model and a new 60˝ HP DesignJet Z6600.

Its bindery equipment includes a Duplo DC646 slitter/cutter/creaser, a Graphic Wizard FinishMaster perforator, a Challenge Champion 305 cutter and an Allen-Bradley PanelView C600 spiral hole punch and coiler. The in-plant’s Web-to-print solution is called Printsys from a company called Prisme Technologies Inc. that is based close to Montreal and has sales across the USA and Canada.

As a consultant with a black belt in Lean Six Sigma, I was hired to help the new manager improve workflow. The folks from Prisme had demonstrated their automation software to us, called Printsys Production Automation or PPA, which works seamlessly with the Printsys Web-to-print solution already in place. Although we were highly impressed with it and could see this as a natural evolution for the print shop, we decided it would make sense to take a good look at the current workflow and see how it could be improved before entertaining the idea of automation. That way we would be starting with a clean slate, rather than a process that had accumulated a lot of wasteful steps over time.

Since this was going to impact the staff of the print shop, we invited them to participate in a half-day kaizen session, in which we mapped out the entire process of how orders are handled from the point where they are received at the in-plant to the point where they are delivered to the client. After all, without the input of the people who actually carry out the work, we knew we might miss vital pieces of information. Furthermore, process mapping often reveals steps or actions that either the manager or other staff members aren’t aware of. And as a bonus, I’ve found that employees love to talk about their work, and giving them this opportunity makes them part of the improvement effort. You are more likely to get their buy-in if you involve them — especially when their way of working is going to change.

Process mapping is easy and very inexpensive to do. It involves a conference room or any large area, a board, some sort of support such as a roll of brown packing paper or a whiteboard, post-it type adhesive note sheets and colored felt markers. If you use the brown paper roll, you’ll be able to roll it up and continue the exercise at a later date, plus you can map long processes more easily than with a whiteboard, which is limited in length. However, the choice depends on individual situations.

The exercise is simple. Essentially you ask employees to tell you how things are currently done starting with how orders are received. Different employees are involved in different steps of the process and some overlap, so make sure all of them get a chance to speak.

Often, some employees will tell you how a certain step should be done rather than how it’s actually being done. Or else they will come up with ideas to improve the process usually because they’ve thought about this before but never bothered to suggest it to the manager. You must keep the exercise on track and avoid these situations by reminding them that it’s important to know how it’s currently done before looking at ways to improve. Also, remind them that what sounds like a good idea for one part of the process may negatively affect another part, and this is why we have to map the entire process before making suggestions for improvement.

Before you begin the exercise, you may want to look up some material on the Web regarding not just process mapping, but also Lean methodology in general. Popular concepts such as 5S (Sort, Straighten, Shine, Systematize, Standardize) and the seven wastes (Transport, Inventory, Motion, Waiting, Overprocessing, Overproduction, Defects) are easy to understand, and employees will feel empowered by having been introduced to them.

The process of mapping is straightforward but requires a facilitator who is capable of bringing out the right information from the participants by listening to them and by guiding the process in the right direction. 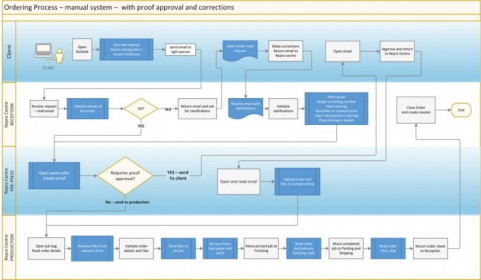 This process mapping example shows all the steps that could exist in a typical process prior to eliminating unnecessary steps. (Click to Enlarge)

Who Are the Players?

The first thing you need to identify is who the players are in the process. Usually, there is a client. Then, depending on the process you’re analyzing, there could be a clerk, production staff — which can also be subdivided into printing, finishing, packing and shipping — and several others such as the accounting department or the delivery company. The board, or whatever support you’re using, is then illustrated with swim lanes that pertain to each of the players. If you’re analyzing order processing you would start with the client placing an order. Then you would follow the process, step-by-step, until the order is completed and shipped to the client. This could take several hours or even a full day depending on the complexity of the process you’re analyzing. Keeping the discussion focused is essential.

Once you have completed the mapping exercise, and everyone is comfortable with it, you can begin on improvement. The purpose of the exercise is to identify actions that are being carried out that are no longer necessary and can be eliminated as well as to implement improvement actions. Unnecessary steps in the process are called “waste” which, as mentioned earlier, comes in different forms. So, the first thing to do is to look at each step in the process and decide whether or not it adds value. If it doesn’t, then it’s probably waste. The name Lean gets right to the point. If it’s not necessary then it’s waste or “fat.” So eliminating it makes the process more “lean.”

A good question to ask while doing this exercise is: Would the client be willing to pay for this (step)? If the answer is yes, we call it a value-added step and it most likely stays. If the answer is no, then we can eliminate it … maybe. There are some steps that we identify as “non-value-added but necessary.” In other words, the client wouldn’t be willing to pay for it but, because of internal requirements, it needs to be done. For example, printing a copy of the order for the Accounting department to prepare an invoice. The client would not be willing to pay for this but the Accounting department requires it so it has to be done.

By looking at the seven wastes — Transport, Inventory, Motion, Waiting, Overprocessing, Overproduction and Defects — while doing the exercise, you’ll be better able to make decisions about each of the steps. For example, is a client willing to pay for an employee to walk to a distant stock room to retrieve paper for his or her order, a process that can take a few minutes (motion)? No, probably not. So the solution here could be to move the paper closer to the point of use. Would a client pay for entering the same information in several different places (overprocessing)?  How about the delays that are caused because the proper information wasn’t received from the client prior to starting the job (waiting)? Inevitably examples of most or all of the seven wastes will appear in a process that has not been analyzed in a long time.

Now with each of the steps identified as value-added (VA), non-value-added (NVA) or non-value-added but necessary (NVAN), you can begin the improvement process. The process mapping exercise we did for my client identified 45 steps in the original process. Eighteen steps were VA, 13 were NVA and 14 were non-NVAN. Given this, we redesigned the process removing all of the NVA steps. Lo and behold, the world did not end! However, we did have to add some steps which became NVAN. We now had 36 steps in the process with nine VA, 27 NVAN, and no NVA steps. So the NVA steps were either completely eliminated or converted to NVAN. At the same time, nine value-added steps were also converted to NVAN making them ripe for possible elimination.

The NVA steps were easy to eliminate but the NVAN steps were the ones we wanted to dramatically reduce. With the process now as lean as possible, we began to redesign it by theoretically integrating automation into the workflow. Almost magically, manual tasks began to disappear, the benefit that automation brings to the table.

There are two areas in any in-plant’s workflow that will be most impacted by automation. The first is the front office. Traditionally each job order has to be opened and validated by an employee who then prints out the job ticket and enters any additional information on it. The paperwork is then handed over to the production staff who have to read the specs, download the file(s), decide which printer to use and set up the printer accordingly.

With automation, jobs are submitted by the client, who has already validated the proof online, directly to the designated printer without any intervention by staff. This is done using pre-defined profiles for different types of jobs. The production staff picks up the job ticket that was automatically printed when the job was submitted. On it the designated printer is identified. The technician simply loads the right paper, if not already loaded, and releases the job. Once complete, orders are closed as soon as they are scanned as shipped, meaning the job orders never need to go back to the office.

There are a lot of Web-to-print solutions out there right now. Many of them get the job to the print shop but few get them right to the printer and ready to print. Whichever you finally decide upon, it’s wise to clean up your act before you implement. This way you will truly see the benefits.