From the Editor: Innovation on Display

This is certainly the season for awards. Between the In-Print 2017 awards, the IPMA Awards, the ACUP awards and IPG’s new In-plant Innovator Awards, plenty of in-plants are getting honored this spring.

The last awards mentioned were presented during the In-plant Innovators Conference last month, a new event that IPG orchestrated to help motivate in-plants to think in new ways and add value. True, the format was similar to our Digital Printing in Government and Higher-Ed Conference, which we ran for the past two years, also in the Government Publishing Office. But at the Innovators event, we focused more firmly on the concept of innovation.

Our award winners all took bold steps to enhance their services, sometimes jumping into new situations without safety nets. Their boldness paid off. During the conference, each winning manager presented a case study about his operation’s innovative achievements.

We also featured a panel of in-plant managers who answered questions that I posed to them about how they have transformed their in-plants over the years. One of them, Jimmy Vainstein, of the World Bank Group, grabbed the audience’s full attention when he showed a video depicting the virtual reality services his in-plant now offers. 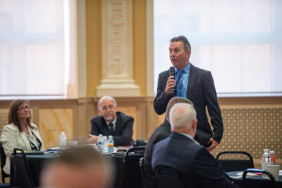 Using 360-degree cameras, which the in-plant provides, World Bank staff can visit places of interest around the world to shoot 360-degree photos and video that will provide staff back home with a more complete picture of the area. These images will help the World Bank build awareness of critical topics that affect people living in poverty. The in-plant creates interactive maps using these images, and handles the digital asset management of this content.

Admittedly, this may be a bit too cutting edge for most in-plants, but I also included the managers of two state printing operations on the panel who described their efforts to consolidate print operations, integrate with mail and add automation to reduce touch points and improve efficiency. Tammy Golden with the State of Tennessee and Marcie Carr with the Commonwealth of Pennsylvania, each described their initiatives to save money and modernize their in-plants. Both revealed that they are currently in the process of getting production inkjet presses, and they talked about why they are moving in this direction. 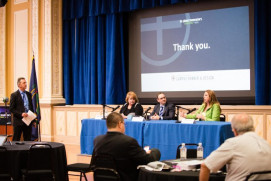 This, of course, was the main topic at the Inkjet Summit, which took place not two weeks before the In-plant Innovators Conference. You’ll find detailed coverage of both events in this issue and hopefully feel inspired to move your own in-plant in some new directions.

XPLOR21 Will Go on as Planned

From the Editor: Together Again, At Last

Duplo USA Prepares for Return to Live Events this Summer

END_OF_DOCUMENT_TOKEN_TO_BE_REPLACED
Subscribe
COVID-19 on In-plant Impressions
Reopening Of America: What Will This Look Like For Businesses Across The US