One of the most helpful sessions for in-plants at the 2019 Inkjet Summit was a panel discussion featuring three managers whose in-plants have already made the move to inkjet. IPI Editor Bob Neubauer asked about their experiences with inkjet technology and what lessons they learned that might help others who are just beginning to look into inkjet.

One benefit that inkjet brings over toner devices, they pointed out, is their impressive up-time; inkjet presses rarely go down.

“There are many weeks where I don’t see a technician on the inkjet,” remarked Steve Priesman, whose in-plant at Omaha Public Schools runs a Xerox Brenva HD cut-sheet printer. This contrasts greatly with the shop’s previous toner equipment, which needed a tech to tend to it nearly every week. He joked that the techs practically had their own parking spaces. 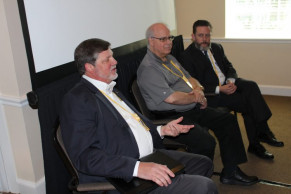 Aflac’s Kirk Barnett pointed out, though, that while his in-plant’s two Pitney Bowes IntelliJet 20 roll-to-cut-sheet inkjet printing system don’t often need service, if you’re finishing inline, that back-end equipment may hold you back.

“When you’re going roll-to-cut and roll-to-fold … that’s your bottleneck,” he noted. “If that [finishing equipment] goes down, your printer’s down.”

Werninger noted that your customers aren’t the only ones you’ll have to sell inkjet to.

“I presumed that my team was on board. But I didn’t do a good enough job of educating my internal crew as I did my customers,” he lamented. The shop endured some “bumps and bruises” getting up to speed, he said. But now they appreciate how easy it is to run the inkjet press. Operators can just start the press, then do other things.

There’s no need for constant calibration on an inkjet press, he added.

“With inkjet, you calibrate one time per paper and you never need to calibrate again,” he said. “We don’t have a densitometer in the digital pressroom.”

But he cautioned that different types of inkjet paper all look the same, despite having different characteristics, so once sheets come out of the carton, don’t put them back and risk mixing them up.

“You’ve got to keep the paper straight,” he said.

Barnett said his operation has narrowed its roll stock down to just three stocks. Jobs meant for the same stocks are grouped together on the front end, then run all at once, to avoid having to change rolls.

Priesman noted that his shop initially guessed at how much ink it would need and ordered a lot. It took a while to use it up.

“I’m using less ink than I thought I would be,” he said.

Panelists discussed how inkjet has allowed them to add color to documents that previously were monochrome. Aflac converted its Explanation of Benefits statements from black-and-white to color with virtually no increase in cost.

At HISD, Werninger added, press running costs and speeds for color and monochrome are the same with inkjet, and ink usage is nearly identical. So the in-plant no longer asks customers if it's a color job. “We just assume it is,” he said. “We run it in color because there's not much savings to be had by not running it in color.”

Inkjet Summit Lesson: Risk of Not Investing in Inkjet is Too Great

Is Inkjet in Your Future?

Inkjet Printing Papers: What, Why and How Much

END_OF_DOCUMENT_TOKEN_TO_BE_REPLACED
Subscribe
COVID-19 on In-plant Impressions
Reopening Of America: What Will This Look Like For Businesses Across The US