As in-plants look for new ways to expand their services to stay relevant and profitable, they join a rather crowded club of like-minded print providers. According to the recently published report “Convergence in the Print Industry: Understanding Growth Opportunities and Competition,” 95% of all printers across segments say they see opportunity for expansion into new services.

One survey respondent from the in-plant segment, Tammy Golden, head of the State of Tennessee’s in-plant, noted this is because, “Everyone’s trying to make sure they’re relevant. The more revenue strings you have, the less impact a downturn will have [on your business].”

One such revenue string in-plants are successfully cashing in on is digital envelope printing. Deer Valley Unified School District, based in Phoenix, is the perfect example of how digital envelope printing can be a major success story. Martin James, manager, graphic communications, noted that his eight-person operation made the decision to completely shut down its offset division four years ago, forcing it to begin outsourcing all envelope printing. But after several years of testing all the vendors and models on the market, he finally decided on the Intoprint MP200, which is a white-labeled version of the OKI C942DP+ envelope press. And he notes that it is a decision he believes will impact his in-plant’s bottom line in a positive way.

“We are now an all-digital shop, and bringing envelope printing back in-house has reduced our turnaround times by 80% and decreased our costs by 30%,” proclaims James.

The new equipment has also opened up new opportunities for the shop. James projects that the ability to print very short custom envelope runs, which can feature fully variable text and graphics, is going to increase the demand from the 175,000 envelopes the in-plant outsourced annually to as many as 250,000 envelopes produced in-house. He also anticipates the new capabilities will boost revenues by as much as 12% annually, which adds up to around $150,000 per year.

“This will absolutely make us more valuable to the school district,” he contends. “We are now offering a service we couldn’t before. We got a lot of requests before for variable data on envelopes that were expensive to outsource.”

James doesn’t anticipate the work all coming in overnight, however. Rather, to help promote the new services to not only his own schools, but also the 41 external districts the shop works with in the state, he plans to start an aggressive marketing campaign.

“We will be sending out variable data direct mail to every customer,” says James. “We will be putting their logo on the envelope to attract attention and say ‘look what we can do.’ We’ll have both variable text and images.”

He believes that once his customers see the new capabilities, they will return for more. James estimates that he’ll see open rates on mailers increase around 10-15% in the first year of running the new press. And he believes that number will grow to as much as 20-30% by the following year, as more people come to understand the capabilities and start to find more ways to use it.

Two other in-plants see the potential of digital envelope printing, but have chosen to ramp up gradually, rather then going all-in as James did. 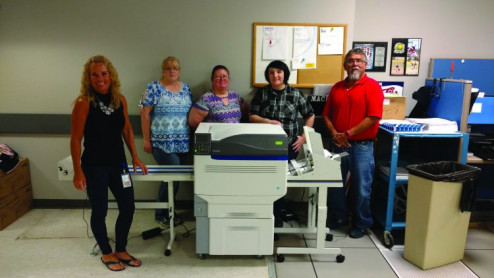 Bobbi Francis, print/document processing department supervisor at Blue Cross and Blue Shield of Kansas (BCBSKS), in Topeka, says that while her five-employee in-plant had been doing low-volume envelope applications for many years now, installing an OKI HD-CX1600 has allowed the shop to print higher-volume and higher-quality work.

“Now we have the ability to bring high-quantity printing applications in-house,” she notes.

In Massillon, Ohio, Brian McKelley, supervisor of the Stark County Educational Service Center (ESC) Print Shop, had a similar experience. The four-employee in-plant moved its black-and-white envelopes from its offset press to its Xerox Versant 80. Color envelopes are still printed on offset, he says, because click charges drive the price up more than he can charge his customers. That said, he hopes to bring those costs down to expand his digital envelope printing even further.

For BCBSKS, however, it is the opposite.

“We print envelopes in color for 99% of our applications,” says Francis. “The demand from our graphics design department to print in color to catch the eye of the customer has pushed us more toward the color side of printing within my department.”

That said, not all shops have had the same success with investing in digital envelope printers. The in-plants at Bloomsburg University and Central Piedmont Community College both see envelope printing as an opportunity — but they haven’t had the success they initially hoped for. (See sidebar above for more details.)

No matter which path a shop takes — going all-digital from the start, or gradually adding in new services — the best piece of advice James can give to his fellow in-plant managers is to take the time to get to know all of the strengths and weaknesses of every option on the market.

“Do your homework,” James stresses. “Go to as many demos as you can, and make sure the equipment you buy works for your specific in-plant’s needs.”

For his shop, he specifically needed equipment that produced excellent color, but could also multi-task. He wanted a machine he could drop 300-400 envelopes into and walk away. But for other in-plants, the primary requirements are going to be very different. Getting the wrong digital envelope press could mean the difference between a successful service, and one that languishes.

Choosing the right digital envelope printer goes beyond just looking at the traditional “feeds and speeds” specifications. It also means looking at the peripherals the shop will use with the equipment.

For both BCBSKS and Stark County ESC, one of the biggest lessons learned early on was that the envelope stock they had been using on other machines couldn’t be used on their new digital devices. Neither in-plant was brand new to envelope printing, and both saw opportunities to expand the types of envelope services that could be provided. Both experienced initial problems other in-plants can learn from.

“Make sure the paper stock or types of envelope stock you are currently using will run through it,” advises Francis. “I failed to see that the window film in our current envelope stock was not supported by this new HD-CX 1600 printer. They needed to be heat resistant, and the current stock we were using on the old printer did not run through it. That was an additional investment and change for our department. It was worth the change in the end due to happy and repeat customers.”

McKelley experienced a different issue, but it came down to the stock as well. His in-plant initially had trouble feeding more than 10-20 envelopes through the machine at a time. Eventually, operators realized they needed to go to side-seam envelopes, which, McKelley says, “cost a little more, but are worth it.”

Digital envelope printing is an opportunity for in-plants to bring a whole new type of work in-house. With this capability, in-plants can print more creative graphics on envelopes, making them far more likely to be opened.

And for shops already offering any kind of variable work at all, it is a natural extension. James points out that while his in-plant does a lot of static printing, it offers variable data on its Xerox Versant 2100 digital color press.

“This is just taking that technique and applying it to the envelopes,” he points out.

For in-plants looking for ways to add new high-value services that will be easy to produce and are cost effective, digital envelopes are a great option. It is an easy way to make an in-plant the hero of any organization that produces mail.

Sometimes, jumping right in and purchasing an envelope printer isn’t the right decision. Bloomsburg University, in Bloomsburg, Pa., decided to go a different route, and purchased a Printware iJetColor, which Supervisor Chris Baumer notes allowed the in-plant to get its foot in the digital envelope door for less than $20,000. But it hasn’t performed quite the way he had hoped.

“We’ve had it for about six months,” says Baumer, “and we’re using it to do variable data addressing — the shells are still printed on offset. We’re not completely happy with the color — it’s a bit washed out — and it’s slow, but it got our foot in the door.”

In Charlotte, N.C., Central Piedmont Community College Campus Printing & Signs has had its Xanté Impressia since 2012, and today it still does about 5,000 envelopes a year on it — volume that Director Nancy Green thought would be higher when the shop first purchased it.

“At that time it was something we wanted and thought we would get more volume,” she notes. “But the college has slacked off envelopes.”

Electronic communications are playing a bigger role now when it comes to getting information to students, she says.

Green doesn’t see the digital envelope printer as a bad investment, rather, she would love to see her in-plant upgrade to a machine capable of doing full-bleed envelopes, which would allow the shop to bring in some of the more complicated designs.

Baumer feels much the same, noting that his shop is still in the market for a good inkjet printer that will expand on the digital envelope printing the in-plant can do, and allow it to transition more work from the offset press.

“I don’t have a lot of time to research equipment and see what’s out there,” Baumer says, “but I would still like to find something to fill the void under $200,000. Something that has nice variable data capabilities.”