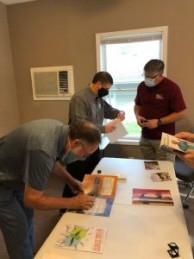 After being forced to cancel the judging of the In-Print 2020 contest back in March due to the coronavirus, IPI and the In-plant Printing and Mailing Association (IPMA) brought together four in-plant managers on Sept. 23 to finally judge the contest – using a much different set of procedures. After a full day of judging, they selected 64 Gold, Silver, and Bronze winners, plus four additional Judges' Recognition Award winners.

Judges met inside IPMA headquarters, in Kearney, Mo., wearing face masks and keeping their distance as they examined the 351 entries in the contest. Those pieces, submitted back in January, have been sitting on shelves for eight months, awaiting judging.

The four judges who were willing to drive to Kearney and spend their day at this task, despite the risks, were: 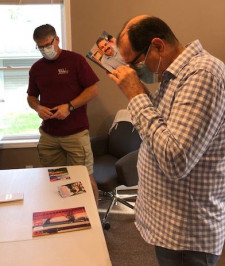 Assisting them from IPMA were Mike Loyd, Jennifer Chambers, and Theresa Hatcher. Observing the judging via a daylong Zoom call were Bob Neubauer, Yale’s Frank Savino (contest chair), Larry Clements (who will photograph the winners), and Chris Donlon, of Kohler (outgoing contest chair). Neubauer gave the judges some instructions to start them off, and answered occasional questions during the day.

Judges  used hand sanitizer frequently and tables were sanitized between each category. They took frequent breaks to go outside for fresh air on a beautiful fall day in Missouri. 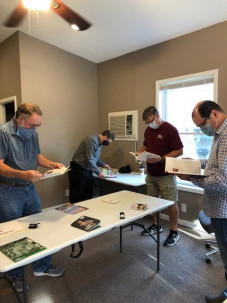 Gold, Silver, and Bronze winners will be announced in the coming days. The Best of Show winners’ identities will be revealed at a later time.

Awards are traditionally presented during IPMA’s June conference, which did not take place this year. Plans are for the 2020 awards to be presented at IPMA’s 2021 conference, at which time the Best of Show winners will also be revealed.

In-Print, the only printing contest exclusively for in-plants, is a partnership between In-plant Impressions and the In-plant Printing and Mailing Association.

Watching the judging from afar.