Producing wide-format jobs in-house is important, according to Wesley Grigg, manager of Elon University Print Services in Elon, N.C. And while he can relate to in-plant managers who are hesitant to move into the segment, he has a convincing argument for those who are still uncertain.

“Until we were into the wide-format business, I understood where they were coming from and why they don’t push for it,” he says. “Now that I’ve been in it for so long, every time I see an in-plant who doesn’t have it … I really push them hard and try to explain to them. The biggest argument you can make to anyone is the margins. The margins are still incredible in what you can sell stuff for.”

Print Services got into wide-format printing back in 2015, when it installed a Ricoh Pro L4160. Grigg explains that the shop chose latex wide-format because of its quality and versatility. When it was installed, he was told the in-plant would get about five years out of the printheads. It was almost five years to the day before the printheads officially “died” in August of 2020. With both printheads shot — and replacement costs of $6,000 per piece, totaling $12,000 — it was time to look for a new device, he says.

The one the shop picked was the HP 365 wide-format latex printer and cutter, mainly because of its affordability.

“Other latex printers on the market are way out of the price range that we were able to spend during a pandemic,” Grigg says.

Although the move from the Ricoh device to the HP eliminated the ability to print white, Grigg says he doesn’t think it’s a necessity for the work the shop is doing. 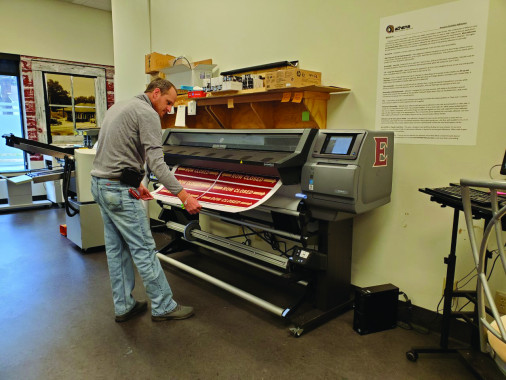 “We have done some window clings,” he says, “and the ink on this HP is a little more opaque — not as translucent as what we had before [but] we put it on our door and it looks fine.”

While losing white capabilities hasn’t really affected Print Services much, adding a cutter has made a big difference. Before installing the HP 365, work had to be sent out if a contour cut was needed. The new device has brought that work back in-house. Additionally, when producing square-cut labels, the pieces would have to be manually cut on a guillotine cutter.

“[Now], we print a whole sheet of labels, and then pick it up and shake it and the labels fall out,” Grigg says.

It has also increased variety when it comes to producing some of the jobs that were already on the table. When the pandemic started, Print Services was doing a lot of COVID-19 signage, but only square-cut pieces. Now, it can produce circles to be used for COVID-19 signage, which will be switched out on an ongoing basis throughout the spring semester. The printer is faster and the cutter speeds up production on jobs.

“With the [COVID-19] ‘seating closed’ stickers that we’re printing right now, we used to have to take those and manually cut them on a cutter, and now with the [internal] cutter it’s so much faster,” he attests.

Securing funding for a new device during a pandemic might seem daunting, but Grigg explains that the justification was apparent from the start. Not only had Print Services had a latex wide-format device already, it was able to show the university just how valuable the technology had been during a time of crisis.

“I put together a document that showed what it would have cost the university had they had to have gotten all the COVID signage somewhere else,” he says.

The price difference alone almost “paid for the machine,” he says. And with an ROI of about a year and a half, it’s a reasonable solution.

Wes Grigg: From 'Just a Job' to Dedicated Printer

Canon inkjet customers will describe how they harnessed the capabilities of their inkjet presses.