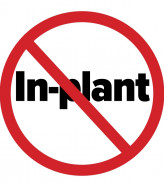 Never again will puzzled looks cross the faces of in-plant managers’ friends when they attempt to explain their careers. In an astonishing show of solidarity, representatives from every print association have unanimously agreed to abolish the word “in-plant” from the industry’s vocabulary.

“I squirm every time I talk about an implant,” remarked one reddening association president. “It sounds like … something else.” (Sitting next to him, his stripper readily agreed.)

“Every time I Google ‘in-plant’ I get a horticultural site,” moaned a third. “I don’t want to read about daisies!”

Though “Junior Printers” received a lot of votes, ultimately the winning label was “Basement Duplicators.”

“Why not? It’s true,” acquiesced Mike Loyd, executive director of what used to be called IPMA, now BDA.

This, of course, will require In-plant Impressions to change its name for the second time in 15 months, to the great annoyance of Editor Bob Neubauer, who grumbled, “Basement Impressions sounds ridiculous. What does that have to do with anything? But no one asked me. I would have gone with Document Devils.”