In-plants interested in production inkjet have a different set of concerns than commercial printers. To address the realities of inkjet from the in-plant point of view, IPG Editor Bob Neubauer assembled a panel of four managers whose in-plants have already made the inkjet transformation.

Mike Lincoln, Colorado’s state printer, noted that his customers’ desire to add color to their transactional material, combined with the approaching end of his Xerox lease, prompted him to look into inkjet. After attending the first Inkjet Summit in 2013, Lincoln installed a Ricoh InfoPrint 5000 MP in his shop, which now prints nearly 90% of its output with it. Its average monthly volume ranges from 7.5 to 8.5 million impressions, with a peak monthly volume of 14 million.

After adding the press, the in-plant found new applications like post cards and motor vehicle registration renewals to keep it busy. To entice customers to add more color to their pages, Lincoln offered to give them 5% color coverage for no additional cost over what the in-plant had been charging for black toner prints.

“Once we started adding color, customers wanted to add more color,” he said, and volumes grew. 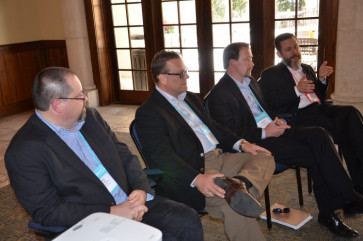 Four managers whose in-plants have already installed production inkjet presses shared tips with their peers during the 2017 Inkjet Summit.

Lincoln offered an anecdote about one customer that had always used pink-colored paper — a paper option not available on the inkjet press.

“We found with the inkjet, because our costs were so much lower, we could actually spray and tint that sheet in a white paper environment,” he said, giving the customer what they wanted.

At the Houston Independent School District, the move to inkjet was more about improving teaching by adding inexpensive color to educational materials, said Chuck Werninger, senior manager of Administrative Services. Now about a third of his in-plant’s volume is being printed on its Océ Vario­Print i300 cut-sheet inkjet press.

“Operating economics was a real piece of it. Inkjet is a lot more efficient,” he added. “The pure costs are about half. We’re selling color at about half the cost we were before, and that’s having a predictable increase in demand.”

The manager of a large insurance company’s in-plant said the move to inkjet was precipitated by the need to merge two print operations. Adding two monochrome Canon ColorStream 3700 inkjet presses allowed his shop to replace seven toner printers. Now 15% of the shop’s printing is done with inkjet, though he plans to get that to 65%. Monthly inkjet volumes are around 10 million pages, he said, with plans to reach 45 million pages/month once the print shop consolidation is complete.

Jason Fonner, of HM Health Solutions, said the need for higher throughput inspired his operation to add several inkjet presses. Now 95% of his operation’s volume is inkjet. One early hurdle, he said, was making sure print runs were long enough.

“With the inkjet continuous-feed presses, you need to have longer runs,” he said. 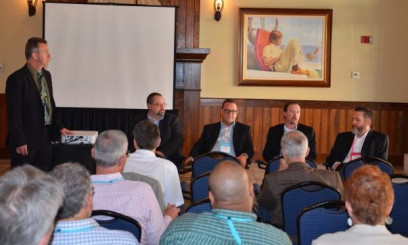 Count on bringing in new applications, the managers said.

“There’s still a lot of print that you’re not getting,” pointed out the insurance company manager. “If you can understand what’s going outside, and if that’s inkjet work, you can use that to justify your inkjet acquisition.”

All recommended spending a lot of time testing inkjet presses with your own files.

“Make sure you’re allocating yourself plenty of time to test before you go live with that inkjet,” reiterated the insurance company manager. And don’t just test the press, run that paper through your finishing equipment. You may find it prints well but has problems on the finishing end.

Lincoln learned that lesson as well when the paper selected for the inkjet press ended up gumming up the friction feed on his shop’s finishing devices. The in-plant had to find a different paper.

“Take a look at the papers you’re using in your shop. You’re probably not going to use any of those. Does that scare you?” asked Werninger. “That transition with paper was a really big change.”

One challenge he confronted was that his customer service people were “protecting” their customers from the lower quality of inkjet.

“I really had to spend some time retraining them about the future and the opportunity,” he said.

In-plants in the audience were understandably concerned about replacing all of their toner devices with a single inkjet printer, with no redundancy. But the panel set them at ease.

“That’s what I did,” revealed Werninger. Lincoln seconded that.

“We don’t have that redundancy,” he said. “It did scared me a little at first.”

But inkjet presses are very reliable, they both agreed.

“Uptime’s incredible on the machine,” Lincoln said, adding that it never goes down.

Related story: From the Editor: Inkjet for In-plants

The Path to Profitability With Inkjet

How Enhancing the Customer Experience

What Do You Call Your In-plant?
Comments
COVID-19 Resource Channel

END_OF_DOCUMENT_TOKEN_TO_BE_REPLACED
Subscribe
COVID-19 on In-plant Impressions
Reopening Of America: What Will This Look Like For Businesses Across The US