After 50 years with the Government Publishing Office, John Crawford's pride and determination are stronger than ever. 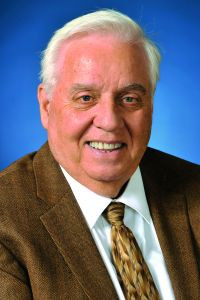 John Crawford, the managing director of plant operations for the Government Publishing Office

John Crawford has worked for the Government Publishing Office (GPO) for more than 50 years, but there was a time when he thought he wouldn't make it past six weeks.

The year was 1966 and Crawford, who had already been in the printing industry since 1958, joined GPO as a bookbinder. He was working the midnight shift and enjoying his time assisting with the production of official documents for the U.S. government, but six weeks into his new job, he and his wife had a son.

"Family comes first," Crawford explained to his foreman, thinking he would need to resign from GPO and search for a day shift job elsewhere.

The foreman offered Crawford a raise to stay on board, but Crawford says his mind was on being there for his family and not on his paycheck. The foreman took Crawford in to talk with the superintendent of binding.

"He said, 'Report to days on Monday,' " Crawford recalls. "I think it was because I came from the outside, and my output was double because I was used to that type of environment."

After starting his new position on the day shift, Crawford was determined to eventually move up the ladder into a management position. But having left high school in the 10th grade, he wasn't necessarily the most attractive candidate.

Undeterred, he obtained his GED and then spent three years taking night classes at a nearby community college, studying English, management and business. The hard work paid off in 1972 when Crawford received a promotion to his first management position at GPO: foreperson of the dayside pamphlet division. 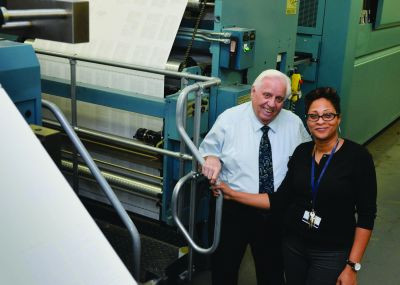 "I had 320 employees and 10 subordinate supervisors," Crawford recalls. "It was a pretty good sized operation, but I loved it."

Once in management, Crawford never looked back. In 1980, he was promoted to assistant superintendent of binding and became the superintendent in 1994. In 2007, he was named to the production manager position and thought that it would be the job he would eventually retire from.

Passion for his Work

But in March of 2014, just before his 73rd birthday, Crawford received yet another promotion to his current position of managing director of plant operations. Crawford says that at first, his wife expressed some skepticism about him taking on a new position at his age. But Crawford insists he still has the same passion for his work as he did when he started decades ago.

Over nearly half a century with GPO, Crawford has witnessed numerous changes and taken part in some memorable jobs. Back when he took his first management position, GPO employed approximately 8,500 people. Now, it's down to 1,700. He explains that as the volume decreased in the production of the Congressional Record and Federal Register, the workforce progressively downsized with it.

While the Record and Register are some of the agency's daily jobs, Crawford says GPO is also tasked with the production of other high-profile documents. One of the first tasks Crawford took on as a manager was overseeing the entirety of the 1972 inaugural program for President Nixon.

Crawford also helped lead a major transition in how GPO produced passports. During his time as assistant superintendent in the 1980s, passports were produced by hand, he says, including the sewing and numbering of the documents. Seeing a need to automate this process, Crawford was part of the team that helped bring the sewing, covering and stamping into an inline process. He was also instrumental in adding the electronic chip now found in passports, he says.

Outside of work, Crawford is an active community member. He has served on various community boards and parent teacher associations, spent 35 years as a youth athletics coach and served 14 years as a football and basketball official. He says he sees a link in his skills as a coach, referee and manager at GPO.

"You have to have communication skills," he explains. "You have to use them and take advantage of that. It all ties in."

Crawford feels that one of the keys to his success with GPO is his willingness to embrace the changes in the industry and to his agency. He also says that his determination to maintain GPO's status as a worthy servant of Congress and the White House keeps him motivated as a leader of the nation's largest in-plant.

"When I came in the door in '66, they were talking about, 'Oh they're going to close this place. I don't know why you're going to come here,' " Crawford says. "I'm still here."

Cory Francer is the editor-in-chief of Packaging Impressions.