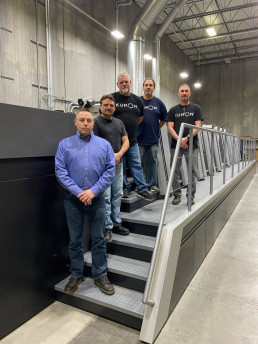 The North American division of Kumon, a structured, self-learning program with educational centers located worldwide, was in need of a better solution for printing the carefully designed worksheets that make its educational model so successful. After exhaustive exploration of many press providers, Kumon made the decision to purchase the Heidelberg Speedmaster XL 106-9P with Push-to-Stop technology — its first Heidelberg investment. The in-house printing operation will run the new press exclusively with Heidelberg’s Saphira Consumables.

Kumon is a provider of quality education for millions of children in more than 50 countries. It started in Japan in 1954 when Toru Kumon helped his young son learn calculus by sixth grade with his unique teaching method of short, incremental assignments. Instead of taking notes, memorizing facts, and being fed information from teachers, children actively develop critical, self-learning skills through carefully designed worksheets.

Kumon’s in-house printing operation produced 100 million worksheets in 2019. To keep up with the demand at its Hebron, Ky., in-plant, Kumon needed to add to its existing fleet of offset presses. Despite having never purchased from Heidelberg in the past, Kumon selected the Speedmaster XL 106 for several key reasons: press speed; advanced press technology and automation; Heidelberg’s vast service network; and the quick availability of parts and consumables.

“We’re able to consistently run the press at top speeds of 18,000 sph, which is significantly faster than our other two machines,” notes Operations Manager Tom Mock. “This press is far more advanced than anything we’ve run before. The consistency of it is outstanding, especially since we typically run thinner, uncoated stocks.”

In addition to faster speeds, Mock credits the advanced Push-to-Stop technology on the machine for increasing the shop’s overall throughput and productivity. With AutoPlate Pro, a fully automatic plate change system, and program-controlled blanket wash-up devices for the blanket and impression cylinders, makeready times in between jobs have been cut in half compared with its previous press.

Due to the drastic productivity improvements, Mock says Kumon has moved nearly 40% of the plant’s total print volume off its other two presses and onto the XL 106. These productivity gains have enabled Kumon to cut its production from three shifts to a two-shift model, bringing plant-wide cost savings. Additionally, Kumon is saving about 15% on converting costs from its paper vendors thanks to the addition of CutStar, Heidelberg’s in-line roll-to-sheet device.

To achieve such drastic productivity improvements, Kumon needed to be able to continuously run the press at top speeds. Exclusively using Heidelberg Saphira consumables — everything from ink to blankets to plates and fountain solution — ensures the reliability and quality that Kumon requires from a high-output press.

In addition to the quality of the products, Mock is pleased with being able to order press supplies and wear-and-tear parts online from Heidelberg’s eShop.

For Kumon, the Heidelberg “experience” does not end with the press and its supplies. Mock cites the installation and training from Heidelberg’s experienced team of SystemService representatives as “second to none.” Despite the large technology leap from the shop’s other presses to the new XL 106, the press operators at Kumon were able to quickly learn the new technology and are excited about running the press.

“During our press search, we knew that Heidelberg would be the right fit for us,” concludes Mock. “Now, having experience with the product and the service, we know we made the right decision.”

How In-plants Preserve Offset’s Place in a Digital World