The opening session at the Kyocera REIMAGINE conference.

Following the theme of REIMAGINE, Oscar Sanchez, president and CEO of Kyocera Document Solutions America, made it a point to be transparent about how the company is embracing change in the e-commerce space as well as how it is handling supply chain management. 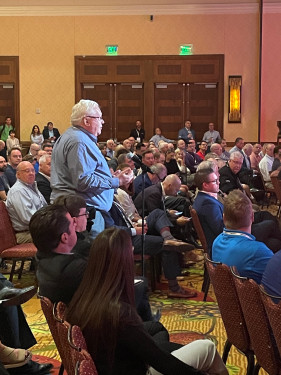 An attendees asks a question at the Kyocera REIMAGINE conference.

To implement some of these changes and alleviate many of the challenges manufacturers and dealers are facing, the company announced programs such as regional dealer roundtables and a warranty program scheduled to roll out in July. In addition, Kyocera has plans to explore other vertical markets such as textile printing and graphic arts in the next few years.

The opening panel concluded with the keynote speaker, Earvin “Magic” Johnson. Most well-known for dominating the world of basketball, Johnson is also a successful businessman, investor, and entrepreneur.

The second day began with a Q&A panel, where the audience was invited to ask questions of Kyocera leadership. Most questions pertained to back orders and the expected timeframe for relief. While the executive team did not specify any dates, Sanchez is hopeful that the end of the year will see improvement.

Attendees were also invited to walk the technology fair, where they got a glimpse of the company’s new high-speed cutsheet inkjet production printer, the TASkalfa Pro 1500c. Designed to increase speed and productivity, target markets for this machine include direct mail, commercial printing, and even in-plants. However, according to Michael Poulin, director of product marketing, it is a utility printer that’s designed to fit into most production spaces depending on needs. 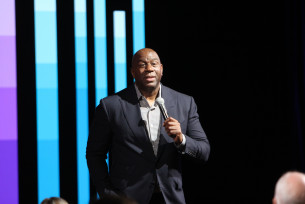 The executive team also made themselves available to media and analysts on the final day for another Q&A session. While they fielded plenty of questions, the REIMAGINE theme again came into play. Sanchez spoke extensively about exploring new ways of generating revenue, such as in the graphic arts and textile spaces.

“To be in the company of so many of our partners after three years apart has been a real pleasure, and we couldn’t have hoped to do it in a better way than with REIMAGINE,” Sanchez said after the event. “The feedback we have received from our dealers, partners, and media guests has been astounding, and it’s essential that we remember that this is only the beginning for us. We want to make this a before and after moment for our organization, defining the future of our company and setting a new bar for our ambitions.”

E Cassie Green Author's page Cassie Green is a Senior Content Editor at NAPCO Media, focusing on the apparel community as well as curating content across other brands. She can be reached at cgreen@napco.com.
Related Content