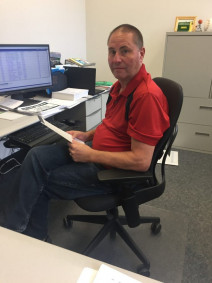 In his 12 years as Ohio University (OU) Printing Services director, Blaine Gabriel has overseen some major changes for the in-plant. But when it comes to making such decisions, like equipment purchases, Gabriel always does his research, crunches the numbers, and gets his employees’ input.

“I just don’t go and do it. You go on the internet, you travel, you look at this stuff, you spend three or four months … instead of jumping in and saying, ‘I’m going to do this today,’” he explains. “Being in charge, you just can’t say ‘Well, I’m putting this in, and you’re going to run it.’ I try to get input, taking the people that are going to be involved with it so they can actually see it, demonstrate it, [and] test it.”

Not surprisingly, it’s this analytical nature that ultimately led Gabriel to a lifetime career in printing. Born and raised in Nelsonville, Ohio, he says the emphasis was more on entering the workforce than college when he graduated from Alexander High School in 1978. After applying to various jobs, he went to work for McBees, a forms company, and was there for five weeks before he found a higher-paying job with Lawhead Press. Gabriel, however, had been accepted at OU for accounting, and contemplated his next move. 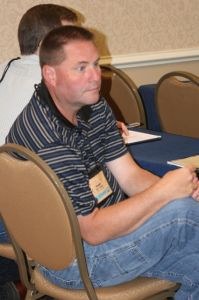 “I love numbers, and so I sat and figured how much I could make at Lawhead, because it was the best-paying job in Athens, and how much it would cost my parents to send me to four years of school,” says Gabriel. “And I decided to stay in the workforce.”

In his 11 years with Lawhead, Gabriel went from being a feeder operator in the pressroom to managing the prepress department, all while the company won national awards. He parted ways when the company relocated to Columbus, and went to work at the Nelsonville Tribune for nine years before learning of an open prepress coordinator position with OU.

The Move to Higher-Ed

He was promoted to director in 2009, and within his first couple of years in this role, Gabriel ­— who also oversees campus mail, moving, surplus, signage, and student mail — faced what he says has been his biggest challenge: switching to a primarily digital operation with a staff accustomed to the offset world.

Having consulted the finance team — and determining the in-plant had just 14 months of operating as it was before it wouldn’t be able to compete — Gabriel evaluated different digital options over several months with his director’s support. Among the equipment changes was a Xerox iGen3 digital color press — the first in the region, he was told. 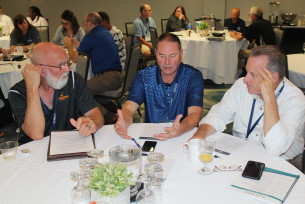 Ultimately, switching from offset to digital was a good move for the in-plant. Gabriel says even the concerned employee eventually approached him and said this was probably the best thing the in-plant had ever done.

As he’s continued to update equipment to create a state-of-the-art operation, Gabriel has always relied on research and gotten the backing of his supervisors and staff. It is that support he is quick to credit for the 60-70% growth and improved scheduling he has seen since taking over Printing Services.

“If you don’t stay up to date, what happens is you fall behind, and once you fall behind — with the way the economy is today — you never catch up,” says Gabriel. “The director I have right now [Tina Payne] … I couldn’t ask for a better supervisor. She’s really encouraged the benchmarking. I give her all the details and show her how we’re going to pay for it, and she’s been on board with all of it.”

The in-plant’s current equipment includes a Xerox iGen 150, a Xerox Iridesse, a Duplo Ultra 200 PRO UV coater, and a Duplo DC-646 slitter/cutter/creaser, which he says runs every day and has been one of the in-plant’s better investments.

He is also quick to compliment his self-motivated staff, many of whom have been in the industry and/or with Printing Services for several years.

“There’s a lot of knowledge here in our print shop,” says Gabriel, noting he also worked with some of the same employees at Lawhead Press.
OU Printing Services, like many in-plants, has endured challenges with COVID-19. “We’re like everybody else; our business is down, but we’re hoping to rebound,” says Gabriel. What has helped the in-plant, he notes, is being able to serve customers outside of the university, as it is the only printer in the area.

In addition to producing more than 100,000 pieces of COVID signage for the university and surrounding high schools and businesses, the in-plant has also seen its apparel-printing business — produced with a Brother GTX — grow during this time.

Gabriel also oversaw OU’s implementation of smart lockers, which began two years ago. More lockers were added in the student centers in December, and it has proven beneficial for students to have 24/seven access to their packages while minimizing face-to-face contact during the pandemic. While the mail center currently has guidelines to reduce contact, Gabriel says it will also install a smart locker so students and faculty don’t have to come into the building to retrieve their mail.

COVID’s challenges struck on a personal level for Gabriel, who coaches high school basketball, and was likely exposed via one of his players.

“We had a practice, and a trainer came and said one of the player’s temperatures was very high, and we sent everybody home. The next day he tested for COVID, and the following day, I tested for COVID,” says Gabriel, whose wife, Tammy, was also exposed as a result. He says he received his results on a Friday evening, and slept that Sunday for 16 hours.

“I just didn’t have any strength, and over a period, I lost my taste and smell. I still don’t have [them] back; it’s been five weeks,” he says, adding that he lost 12 pounds and had some difficulty going up the stairs at work when he eventually returned. Able to work from home and adjust his schedule while quarantining, Gabriel only lost a day of work. While a COVID case and potential exposure required two other employees to miss work, he says the impact to the overall operation was minimal.

“It was able to continue because, at this time, we’re not buried in … printing. If it was a normal time and this kind of stuff happened, we would’ve been in deep trouble,” he says.

While his concern is bringing in more printing business, as not everyone has returned to campus, Gabriel is looking ahead. He plans to redo Printing Services’ website and start marketing the in-plant on Facebook. He also hopes to buy an automated contour cutter to explore more opportunities for the shop’s wide-format business.

Gabriel also looks forward to attending the Southeastern University Printing & Digital Managers Conference (SUPDMC), through which he’s formed a tight-knit group of friends over the years. Its conferences have let him connect with other higher-ed in-plant managers and learn from the different generations that attend.

In his free time, Gabriel enjoys golfing and fishing, which he picks up in the spring after the winter basketball season. Married for 42 years in May, he and Tammy have two sons, who each work in educational settings. His oldest son coaches basketball at High Point University, and the other works in OU’s Custodial Department, while Tammy is a cashier at Alexander High School.

And while he won’t make a hasty decision, Gabriel is trying to live by some words of advice from his grandmother: “Eighty percent of the stuff that you sit and worry about never materializes. So, if you can’t control it, don’t worry about it,” he paraphrases. “It was hard for me to get to that point; [it’s] probably the last seven to eight years I’ve been able to finally realize what she really meant.”