For a few weeks this past summer, Rich Hoffner spent a lot of time in the alley behind his in-plant.

Thanks to a generous donation to his parent organiz­ation, the Dauphin County Library System, his in-plant in Harrisburg, Pennsylvania, had been given a new home in a larger space. The only catch was he had to move most of the equipment himself down the alley that connected the two buildings. 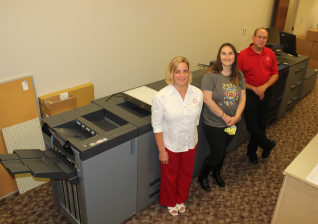 “It’s a pretty smooth alley,” he observes — which is a good thing because over and over in August 2021, Hoffner pushed carts down that 300-ft. stretch, moving the Xanté printer, the MBM collator, the shrink-wrapper, the shelving and mail trays, and all the paper and envelope stock. Vendors helped him roll the Triumph cutter, Morgana folder, Neopost folder/inserter, and Kyocera printer down the same alley. At times, he had to print jobs in the old location, then wheel print pieces down the alley to the new location for inserting or cutting. Overall, it was quite a workout.

But Hoffner isn’t complaining. At 3,350 sq. ft., the new in-plant facility is larger, better laid out, and has space for both the printing and inserting equipment, which used to be on opposite ends of the building from each other.

“Workflow is so much better. Everything’s in one room now,” says Hoffner, Print and Mailing Services manager. 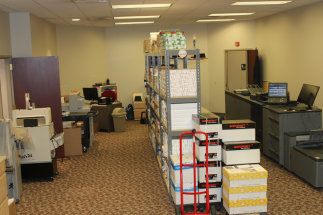 In the new facility, paper and supplies are in the center of the room, with the equipment placed along the walls.

Along with the new facility came a switch to newer technology. The in-plant left its aging Itek 3985 offset press behind and installed a new Konica Minolta AccurioPress C4070 with the IQ-501 Intelligent Quality Optimizer, which constantly monitors and adjusts printed output for consistency. The C4070 has an in-line bookletmaker with face trim capabilities, and is easily able to handle the variety of materials the in-plant prints for library programs, such as brochures, booklets, forms, fundraising mailings, late notices, and display signage, as well as letterhead, envelopes, and business cards.

“Everyone is impressed with the quality of the jobs being produced and the quicker turnaround time,” reports Hoffner, who has worked for the Library since 2010.

The in-plant is part of the Library’s eight-employee Community Relations Department, which serves eight libraries and other departments around the county. Though Hoffner handles the majority of the printing, everyone in the department has been trained on the C4070, and some can also run the inserting and addressing equipment when he needs help or is out of the office. 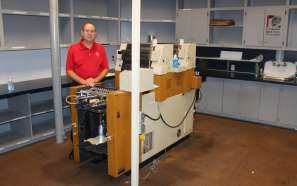 Rich Hoffner bids adiau to the Itek 3985 offset press in his old facility. Moving to digital color has allowed the Library to switch to a print-on-demand model.

The genesis of the in-plant’s move was the $3.5 million “Your Place to Belong” capital campaign to expand and transform the historic McCormick Riverfront Library in downtown Harrisburg. This project involved repurposing the section of the library where the in-plant’s old facility was located, sparking a quest for a new location. Several facilities were proposed; none were ideal.

Then Penn National Insurance (PNI), which has a seat on the Library’s board, suggested the new location, as part of an in-kind donation from the company. At no point did the Library consider closing the in-plant, says Christina Lauver, marketing and public relations manager.

“Our board recognizes the cost savings we bring to the table,” she says.

Beyond cutting costs, the in-plant provides many other values as well. It handles the distribution of new library cards, late notices, and fines. It uses BCC software to sort mail for discounts, saving money. And it makes sure the Library’s brand colors are consistent on all printed communications: mailings, business cards, stationery, signage, etc.

Now that everything is together in one room, Hoffner can finally appreciate how much more efficiently the in-plant runs.

“We sit back now and we think, ‘how did we ever work over there?’” he muses. 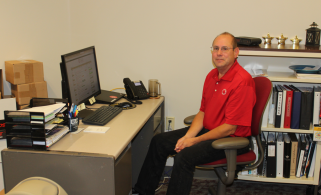 Rich Hoffner at his desk inside the new facility.

Hoffner was able to design the shop layout himself. He purchased the shelving and cabinets and assembled them. Paper and supplies are in the center of the room, with the equipment placed along the walls. The new shop is much more organized than the old one, where jobs and paper were piled wherever there was room. With easy access to the street, paper and supply deliveries are much easier than in the old facility, where deliveries had to come down in an elevator.

He is especially pleased with the reduction of effort the new AccurioPress C4070 has brought about.

“I can put paper in the tray, and I can get a finished booklet, versus printing one side on the offset press, and then running the other side, and then collating it all, and then trimming it with the cutter,” he says.
Plus, he can multitask now.

“I can run 1,000 sheets and then cut it and go over and start inserting while I’m still running more on the digital press,” he notes.

The AccurioPress C4070 has also enabled the Library to stop printing large volumes and storing them, and instead move to a print-on-demand model.

The faster turnaround time has also opened up the possibility of taking in outside work from the Library’s partners or from nonprofits.

Meanwhile, the expansion of the McCormick Riverfront Library continues, with completion targeted for the fall of 2022. The library’s entire downstairs area, including the in-plant’s old location, will be open to the public as a learning space and children’s area. By donating space for the in-plant’s new facility, PNI has made this expansion possible.

“Their donation is allowing us to offer more to our community,” affirms Lauver. “They’re making it possible for us to open that space downstairs at McCormick Riverfront Library and give our community more.”
PNI’s roll will be acknowledged during an open house the in-plant plans to hold soon to formally open its new facility and show off its capabilities to its community partners.