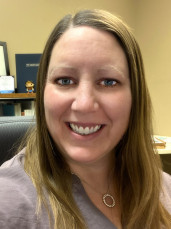 When it comes to generating real change, there are many attributes a leader needs. First, the vision; then, the courage of conviction to believe it’s an achievable goal; and crucially, the tenacity to put themselves in the driver’s seat and get the wheels in motion. Lisa Stelter found herself in possession of this winning formula.

“I put together a strategic plan and said, ‘if you are looking for someone to take a look at our print operations, here’s my vision of where I think Sanford Health should be,’” recalls Stelter, manager of Print and Mail Services at Sanford Health.

Growing up in Marshall, Minnesota, with passions for graphic design and photography, Stelter dreamed of pursuing a career in the latter and made plans to study the discipline. Family intervention veered her temporarily off course and ready to focus on accountancy instead, but at the eleventh hour she decided her heart was still set on her original choice.

“I went to college for two years at Minnesota West Community and Technical College at Canby, Minnesota, which was about 30 miles northwest of Marshall, and I loved every minute of it. Our professors were fantastic,” says Stelter. “The first year was really focusing on the graphic design piece and learning the software.”

The course included a photography element that had students taking photographs and developing them in a dark room, and the second year of the course focused on design and, of course, printing. The students would design, develop, and prepare their own plates.

“It was all old school,” explains Stelter.

Into the Working World

After graduating in 2000, her career began in earnest.

“There was a print shop in Brookings, South Dakota, called Insty-Prints that had reached out to the school looking for an intern, and I got the position, which then turned into a full-time position after I graduated from college,” she recalls. “I stayed there for three years and did all of their graphic design work, and then also helped with the implementation of a digital platemaker, and that was all new to me back then, having done things the old school way at Canby.”

Following her departure from Insty-Prints, Stelter had her sights set on something bigger, both from an employment and location perspective.

“I was hoping that Sioux Falls, South Dakota, would be my new hometown,” explains Stelter. “That’s where I wanted to live because it was a bigger community, and I saw it as holding more opportunity.”

And hold opportunity it did. Stelter began working at another small print business, Print Right Printing, as graphic designer and prepress technician. After two years, she made the move to Sanford Health, where she remains today, initially in the role of graphic designer.

Everyone’s first day in a new role is scary, but Stelter’s debut at Sanford Health took things to a new level.

“I started on October 31st, 2005,” recalls Stelter. “I walked into a spooky room full of spider’s webs, everyone in costumes — it made it very difficult to remember who everyone was the next day.”

With that, Stelter’s career at Sanford was underway. She moved forward as the business continued to grow, taking up the position of graphic arts coordinator in 2006, graphic design strategist in 2010, and graphic design manager in 2012, before moving into her managerial role in February 2017.

“All of my previous experience both within and outside of Sanford led me to where I am today, overseeing Sanford’s print and mail operations,” says Stelter. “I think having the opportunity to just troubleshoot and understand the process from start to finish — even going back to the old-school process — it helps put things together, in terms of how I can best lead a team of creatives or printers. It’s been a great journey, and February will mark five years overseeing print and mail, so I’m excited about that milestone.” 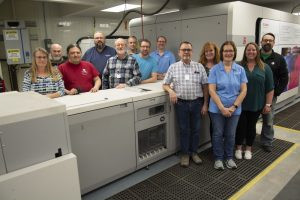 This brings us back to Stelter’s strategic plan that landed her the managerial position. Her vision for the future of the in-plant started with consolidation: folding the print shop operation in Fargo into the main location in Sioux Falls.

“We really had a duplication of efforts,” explains Stelter. “Their volumes were fairly light to moderate, so with the acquisition of new equipment and centralizing operations here in Sioux Falls, we were able to close our Fargo location.”

The most significant equipment addition was an investment in a Canon/Océ VarioPrint i300 cut-sheet inkjet digital press, the speed of which has contributed greatly to the success of Sanford’s consolidations.

“I went to the Inkjet Summit, and I could see that this was the machine we needed to make it happen,” explains Stelter. The operation also added a BLM600 in-line bookletmaking system onto the inkjet press, allowing the in-plant to create the many booklets it produces in one continuous process. Much of the equipment the shop has today is equipment it had when Stelter began, and she continues to review and upgrade print operations, with new equipment incoming in early 2022.

Another significant change was just around the corner. In 2019 Sanford Health merged with the non-profit senior health and housing services provider, the Evangelical Lutheran Good Samaritan Society.

“They had a lot of archaic processes, there was no print-on-demand, a lot of housing inventory, paying for storage of that print inventory — a lot of waste. So, we closed their print shop a year ago and merged all of that work into Sanford’s print shop here. It’s been an exciting journey.”

Of course, exciting changes often come with challenging consequences, particularly when it comes to consolidation and shop closures.

“There were definitely some difficult conversations regarding staff and their positions,” recalls Stelter. “I had to learn a lot about how to maneuver those with team members.”

Stelter is resolute in her professional development goals, keen to continue learning and growing as a manager.

“Since I began overseeing the print shop, I have engaged with a number of resources for the improvement of myself as well as operations, such as becoming involved with IPMA [the In-plant Printing and Mailing Association], connecting with In-plant Impressions, and attending trade shows,” she says. “I want to be a great resource for others to reach out to with questions.”

Since the mergers, Stelter’s focus has been on identifying opportunities for additional print and mail work within the organization. Technically, Print and Mail Services has the right of first refusal on internal projects, but the challenge lies in communicating and marketing the in-plant’s services to the wider business.

“Many people don’t even realize we have a print shop,” explains Stelter. “It can be difficult to identify where outsourcing is occurring. I don’t have a sales team that can go out and meet departments, and that’s one of my goals: to just dedicate some time to meet with department leaders to understand how we can help them continue to insource work.”

Despite this challenge, the ever-strategic Stelter unsurprisingly has her ways of bringing the work in. A network of champions for the in-plant in various departments point the unaware in Stelter’s direction, making sure they know the in-plant has the solutions they are looking for. Stelter also works closely with the accounts team, which flags projects scheduled for outsourcing, giving her a reason to reach out and promote the in-plant.

It also pays off to be on hand to help people out of a bind. The HR team recently reached out to Stelter with an emergency. The department had been outsourcing its 1095-Cs, and the vendor just informed HR it did not have the paper or supplies to complete the job. That work will now be insourced, amounting to 130,000 sheets.

The in-plant is also in the process of transitioning all of Sanford’s health insurance invoices to in-house production, another healthy chunk of work, with about 30,000 to 35,000 invoices a month. The work is there, and Stelter is determined to ensure as much of it as possible is directed to where it needs to be.

The in-plant hosts an open house every couple of years to let people who don’t know about Print and Mail Services learn about the shop’s capabilities.

“One of my biggest goals is to try and identify those gaps,” says Stelter. “I see it as competing against ourselves internally. We know that we can do things cheaper and more efficiently if I can just locate that work and get it routed to the proper channel.”

Stelter is looking forward to taking delivery of new equipment this quarter.

“I’m hoping this will allow us to introduce some new capabilities, which will expand our scope of services,” she explains. There is also a plan to expand the shop’s footprint, bringing in wide-format capabilities, which are currently housed in a different location in Sioux Falls. Stelter is always keeping an eye on the bigger (and better) picture:

Stelter has bigger plans for herself, too.

“All of what I’m doing today is setting me up for success for the future, and I just want to make sure that I have enough experience and variation under my belt,” she says. “At the moment, as I’m leading operations and carrying out the work, I feel like I’m limiting my ability to provide vision and be that future thinker because I am so focused on the day-to-day.”

Outside of the in-plant, Stelter’s passion for photography has endured, and she is a keen nature photographer. As well as taking pictures of wildlife, she also enjoys astrophotography, and has even been lucky enough to capture the Northern Lights on camera in South Dakota.

At home, Stelter lives with her husband Richard and their two children (Mausten, 12, and nine-year-old Elle). Both sharp shooters, Elle is a BB gun competitor and Mausten shoots precision air rifle, with hopes of being an Olympic shooter, something Stelter and her husband support every step of the way.

The family enjoys spending time in the great outdoors, taking in the scenery and wildlife in their beautiful corner of the world. And with the responsibility of many key changes and improvements during her tenure at Sanford Health (and more to come, if she has anything to do with it), Lisa Stelter has more than earned the chance to unwind.