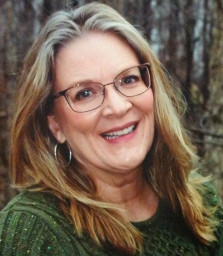 Jo Ann Duron didn’t set out to get into the print industry — at least not initially. Her entry into the graphic arts program when she began her college career in the late 1970s was done with an eye on a career in photography. However, the program she was attending included not just photography, but typesetting and printing as well, and the rest, as the saying goes, is history.

Today, Duron is the printing manager for Northern Virginia Community College (NOVA), with an operation that spans 3,652 sq. ft., run by eight employees, including herself. In fact, Duron designed the current print shop layout, setting everything up to her own specifications when the shop moved to its current campus home in Annandale, Va., in 2015.

“I thought I wanted to be a photographer, but my career pushed me into printing,” she says. “And I think that worked to my advantage. There are a lot of starving photographers out there, and I think I would have been one of them.”

Duron was first exposed to the world of print working for a quick printer in Mobile, Ala., where her family was living at the time. Her father was in the military, she notes, so they moved around a lot while she was growing up. From the quick print shop, one of her instructors decided to open a trade shop and asked her to come work for him.

“Then Virginia called me home, and I got a job at [NOVA] in 1980,” she says. “I went directly into the in-plant. I started out as an offset press operator, running small duplicators and the ABDick press.”

Over the past 39 years, Duron has slowly made her way through the operation, with stints in customer service, as a first and then second line manager. In 1999, she took on her current role of manager.

Today, while the shop still has some small offset presses, it is a mostly digital operation. Duron has slowly transformed it into a full-service print provider that can better meet the needs of the more than 75,000 students and staff that make up the institution.

“This college is the largest institution of higher education in Virginia,” she says, “and the second largest community college in the United States. I think that usually surprises people the most; because we’re a community college, people are surprised by the amount of work we do. But we’re pushing out 32,000 admission packs, and up to 100,000 pieces to potential students every year. People don’t realize we are as big as we are.”

To handle jobs like the 32,000 admission packets, Duron added equipment such as the Xerox Color 1000i digital press, which now handles the bulk of the marketing and high-end work produced. She also added an entire mailing operation, allowing the shop to bring processing and bulk mailing in-house for a faster, more efficient process.

“Marketing mail is probably the largest segment we produce now,” Duron says. “But other than mail pieces and the marketing mailings for the college, we also added wide-format, and we do a lot of signage for the college.” The in-plant added an Epson SureColor S30670 to its lineup, which allows it to do projects such as posters, banners, and, says Duron, “a lot of the outdoor signage.”

For Duron, one of the things she is most proud of in her tenure running NOVA’s in-plant operation is her staff.

“I’m really proud of our customer service,” she says. “There is rarely anything asked of us that we don’t jump through hoops to do, and that’s why we’re valued.” 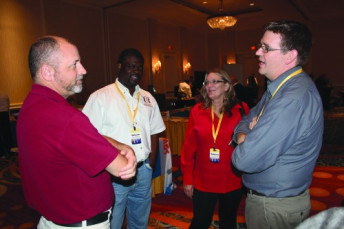 “We have very little turnover,” she says, although she did add a newer group to the staff in recent years, with the skills to handle the tasks driven by the more modern technologies.

“We needed help getting up to snuff with the computer world,” Duron notes. “We really needed that kind of help.”

Part of the reason Duron believes she keeps people for so long is that she goes out of her way to make sure she hires the right people to begin with.

“I believe if you’re not deadline-driven, you’re not in the right place,” she says, noting that it is important to her to have individuals on staff who are motivated to push when facing tight deadlines, rather than those who might freeze or crash.

While the shop doesn’t directly service student requests, it does produce anything the faculty or staff need, in addition to all of the marketing materials or other print work the college might require. Duron notes that the in-plant will occasionally offer open house tours to help keep faculty and staff up to date on what the shop is capable of providing. She also makes sure the in-plant’s information is included in the college-wide newsletter.

One of the biggest challenges Duron has had to overcome doesn’t have to do with printing at all.

“There was a time before I became manager, that my [supervisor] at the time told me there would never be a female in his position,” she says. “I was able to prove him wrong. I sometimes still feel that challenge. I don’t have any regrets, since I believe every challenge we face makes us who we are, but there have been challenges being a female in this [print] world. More so in the beginning than [today.]”

Duron didn’t just tackle that obstacle head-on, she barreled through it, updating the entire shop from top to bottom and adding the mail operation.

“I’m really proud of the workflow in this shop,” she says. “The design — right down to the color and lighting — was mine. I think that’s one of the things I’m most proud of.”

Another item that tops her list of achievements is taking the shop from a pen-and-paper ordering system to a full Web-to-print system with WebCRD from Rochester Software Associates. Today, everyone who needs print from the shop can place their orders via their desktop, or even, she says, remote into the system from home.

“That really changed the convenience of how people order, and the way we contact them,” she says. “I’m also really proud of our mail. There was a huge learning curve, to go from knowing nothing about mail, to learning the entire mail system, which is ever-changing.”

But that doesn’t mean Duron is content to stop innovating, with issues such as revenue and print shop volumes continuing to keep her up at night. A few years ago, she notes, the shop was moved from being part of the general college funds, to being what she calls local funds.

“Although that has its perks,” she says, “one of the things that has been a hurdle is that we now incur all of our employee’s salaries. We’ve been trying to cover our costs per salaries, which has been an undertaking to get there.”

While the shop does have a chargeback system that allows departments to use their budgets to cover the cost of their printed materials, Duron notes that she can’t simply charge for the cost of salaries. Instead, she added what she calls assembly charges, which cover the labor.

To help streamline the operation and funnel more work through the shop, which will help ease revenue concerns, one of Duron’s top priorities is improving the online system.

“We’ve been working hard, and getting a lot of templates and products streamlined for personalization,” she notes. “Now staff can go online and order business cards, letterhead, labels personalized for their department, etc. We’re hoping to get all of those up and running over the coming months.”

While some of those templates are already available, she notes, getting the rest online will also help the college streamline the brand standards, keeping everyone to the same look and feel for all of their printed materials, while at the same time making it easier for them to obtain anything they need.

While Duron has spent the last 40 years dedicated to the print world and the NOVA in-plant operation, she does try to get away sometimes. Right now, she notes, her biggest hobby is beekeeping. She has two hives that she hopes to grow to support as many as 20,000 bees each. And while she doesn’t currently have a horse, she notes that for the past 25 years, she has also been an equestrian.

Despite her busy work schedule, Duron makes time for her family, including her husband Roger of almost 37 years, as well as her one child and four grandchildren. The oldest grandchild is currently nine years old, while the youngest, she says, is one and a half.

“It’s crazy and wonderful at the same time,” Duron notes. Sadly, she says that none of them really seem all that interested in printing — yet.

Thinking about the future, however, Duron believes one of the biggest keys to success is to diversify, and “make sure you aren’t a one-trick wonder,” she cautions. Ensuring her in-plant can do many different types of work, from wide-format to high-end printing and mailing, she says, has been the true driver of why her shop is so valued by her institution.

“We have strong support from upper management, who believe in what we do, and that we are a valued resource,” she proclaims.

Always keeping an eye out for what might be the next good fit is an important step as well. Right now, she notes that 3D printing is something she is keeping a casual eye on, noting that she hasn’t seen anyone making money with it yet.

“We’ve seen a lot of ‘wow,’ but haven’t seen the return,” she observes. But making sure she stays on top of the latest technologies and ensuring she is always looking for new ways to improve her own operation is a crucial part of her role.

That approach to managing an in-plant is a large part of NOVA Printing Services’ success today. Duron might not have set out to be a printer, but she embraced the industry and never looked back, making her mark and transforming her operation into a modern powerhouse that, ultimately, serves a cause she believes in.

Justifying the Cost of New Technology