Though digital printing technology has become nearly ubiquitous at in-plants, the latest IPI research shows that 44% of in-plants still provide offset printing services. Despite its advantages, going all digital isn’t always practical — or even desired.

The factors that determine which jobs go to which equipment is as varied as the markets the in-plants serve. But one common determinant is run length. 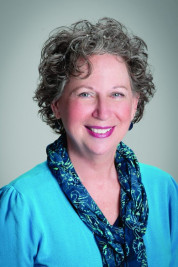 “Offset is generally quantities of 500 to 30,000, and digital is quantities of 500 or less,” explains Terri Bischoff, director of Creative and Print Services at the University of Southern Indiana, in Evansville, Ind., which runs both a four-color Presstek 52DI offset press as well as Xerox Versant 180 and Versant 3100 color digital presses.

“We can print about the same number up on both offset and digital, as our plate size is 14x20˝ with an image area of 13x19˝, and digital can print a 13x19˝ max sheet. However, we cannot print a full bleed image that is 13x19˝ on the digital machines, but we can on the press — and that is sometimes a deciding factor on which machine to use.”

For Jesse Stegall, Print Services coordinator for the City of Columbus, Ohio, run length is the major factor for deciding whether a job goes on the Canon imagePRESS C650, Canon imagePRESS C810, A.B. Dick 9910XCD, or Presstek 34DI. “For CMYK work, it is usually the size of the job that dictates which type of machine to put the job on,” he says. “Two hundred and fifty sheets is usually the cutoff for digital printing; the exception would be if the turnaround time is tight, or the job is needed same day, [then] we have to go with digital.”

At Leggett & Platt’s in-plant, which runs Heidelberg offset presses, along with Xerox digital presses, the decision isn’t always as clear cut, however. Michael Margolies, VP, LP Marketing + Creative for the Carthage, Mo.-based company, notes that, “Volume, turnaround requirements, paper weight [all play a factor]. Any time the run gets near the level of effectively using our disposable plates, we will move it to the four-color press and off the digital press. We don’t typically run single color on the digital presses.”

Breaking Down the Jobs

The experience of these in-plants mirrors the conventional wisdom, with the 250-500-sheet run length generally where shops find it stops being cost-effective to run on digital presses, and will move the work back to the offset presses. For in-plants that typically run short, quick-turnaround jobs, it’s not hard to see why digital technology is attractive, but for those still relying on the longer, more intricate runs, this is where offset continues to shine. 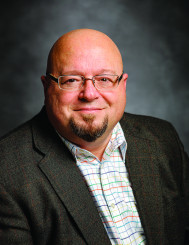 Margolies notes that there is a fairly clear delineation between what is run on the two technologies.

For Bischoff, of the University of Southern Indiana, brochures, booklets, posters, and postcards run on both technologies, based on how many are in the run, and how quickly they are needed. But business cards, stationery, and course materials, she notes, are generally run on digital. The in-plant serves more than 800 employees campus-wide, with a staff of 12, so these items are constantly on tap.

Stegall, on the other hand, notes that while many jobs for the City of Columbus have migrated to digital, there are some that continue to be true offset applications, including “stationery items such as letterhead and envelopes, higher-quality posters, brochures, newsletters, and hot cards.” He serves more than 10,000 employees, with a staff of just three, and he notes that in recent years, he has seen more jobs moving from offset to digital equipment as the speed and quality improve, and run lengths decrease. He has also, he notes, seen the digital capacity filling with new work that previously couldn’t be done with the offset presses. 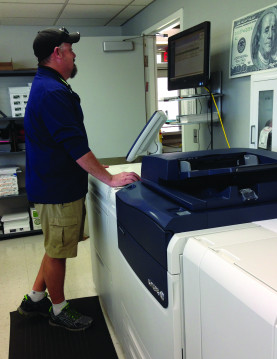 At the University of Southern Indiana’s Creative and PrintServices department, Bill Forston runs a job on the XeroxVersant 180. The in-plant also has a Presstek 52DI offset press.

“That has happened more in the last year,” agrees Bischoff, who has also started combining both technologies in the same job. “We have some booklets that we print the covers in color on our offset press and the black-and-white insides on a digital press.”

Both Processes in One Job

The flexibility to break jobs apart to run on the most cost-efficient technology, while still producing a high-quality piece, is a game changer for many in-plants in similar situations.

“An example would be the softball scorebooks we print for our Recreation and Parks department,” says Stegall, “where the cover pages are full-color high-resolution artwork with heavy coverage, and the inside pages are just collated black-and-white prints easily accomplished on our digital equipment.”

“We have a numbering and perforation press, for example,” agrees Margolies, of Leggett & Platt, “where we might run a registration form or warranty card that gets attached to a product manual. We might run some inserts digitally that get inserted into a black-and-white manual or parts catalog.”

That said, he continues, “We’ve been doing digital a long time. We don’t really need to think about what goes where, and it’s well balanced. We don’t run all presses anymore due to digital, but two of the presses run full-time if there is staff on hand. We have certain work that always goes to one or the other. We don’t have a need to shift work to digital. We leave it up to the staff to decide what goes where; they have all been doing this for long enough to know what’s best.” 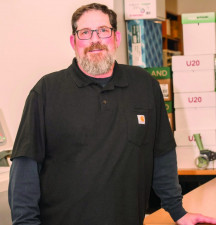 Both Bischoff and Stegall note that substrate choice for jobs is a “nonissue” when determining where a job goes, with digital presses today able to handle pretty much anything the offset presses can, with only a few exceptions.

“When I buy my stock I specify that it must be compatible with digital as well as offset equipment,” Stegall points out. With most mills having options that can run on either technology, and the range expanding all the time, this isn’t as difficult a prospect as it was even a few years ago.

Margolies, on the other hand, notes that with his presses, substrate choice can still be a deciding factor.

“Our digital press can handle some heavy stock,” he notes, “but the products don’t always fold well. Sometimes the toner cracks … during folding. If the paper is a heavier weight, has significant coverage and will be folded, we will lean toward offset.”

All three note that color doesn’t enter the decision-making process at all anymore, a testament to how good digital technologies have gotten when it comes to producing a wide color gamut, and matching offset colors — or getting so close that it’s difficult to see the difference. In fact, all three noted that even when a job is run across both digital and offset technologies and later combined into a single, final piece, they don’t get comments about colors not matching, or something seeming off. Where color was once one of the driving forces behind the digital/offset divide, today that difference has all but been erased.

That said, while customers don’t always see the breakdown, all three in-plants do continue to price the work slated for offset or digital presses differently. Cost-per-page can still vary widely, depending on factors such as ink coverage and click charges, as well as consumables such as plates and chemicals, but that doesn’t mean a customer necessarily understands those differences — or even wants to.

“Our customers will sometimes request a quote in order to get approval for a print project,” notes Stegall, with the City of Columbus. “They have the confidence in us to provide the most cost-effective way of producing their print job.”

“Our customers don’t often know or care how we print their jobs,” adds Leggett & Platt’s Margolies. “Most don’t know if it’s digital or not. There are price differences, however our customers aren’t very aware or don’t care why. We do quote every single job regardless of it being internal or external — we do a lot of outside work; the print plant is required to be self-funded at break-even or better.”

All of this means in-plants that embrace digital technologies don’t have to give up their legacy offset presses; running one doesn’t mean going “all-in” or ditching the other. In fact, for in-plants looking for new ways to serve the parent organization’s mission while running leaner, more cost-efficient operations, exploring a hybrid operation is the best-case scenario, opening up the way to new applications and faster turnarounds, while ensuring the same long-term projects are managed without missing a beat.