Are You up in the Cloud

While many printers don’t quite trust “the Cloud” with their data, others enjoy the newfound efficiencies and speed it has brought them.

It all started with a simple question from Jim Hamilton. While attending a user’s conference late last spring, the group director for InfoTrends’ Production Group consulting services weighed the crowd’s interest in the subject of “the cloud” and the opportunities it presents. Surely, he thought, there would be ample support for the Internet-hosted services of data and technology.

Hamilton was a bit taken aback by the sharply negative responses. The cloud was a marketing fad, said one; not feasible due to client restrictions, another piped in. There were even horror stories about snowstorms KO’ing the service for two days. Loss of control, licensing concerns, the danger of software revisions … even during another presentation, “the cloud” was termed a “total mass of unsatisfying solutions.”

It should be noted that Hamilton’s cloud pulse was taken at a user’s conference that had a fairly representative sampling of the printing industry. And while printers have legitimate concerns and may be constrained by contractual agreements with clients regarding data—one-third of respondents to a 2013 poll taken by InfoTrends cited security policies—there are printers large and small that are using cloud services with confidence—and satisfaction.

One of the biggest stumbling blocks to a broader acceptance of cloud services is the notion of printers putting control in the hands of a third-party provider, notes Ryan McAbee, associate director of Production Software Services at InfoTrends. For example, the loss of control in not having the server or infrastructure accessible by the printer’s staff, and not being able to make the call in terms of software updating cycles. And, aside from the security considerations, the 2013 survey also showed respondents were concerned about working with large-sized files.

Then there’s the issue of liability, and the inescapable conclusion that in the event of a breach or a technology failure, the printer itself—and not the third-party provider—would be held accountable.

“There’s some legal ambiguity,” says McAbee. “The fact that there’s been some huge data breaches in consumer spaces puts data security at the top of people’s minds.”

Beyond the cloud concerns that exist among some printers, though, lurk other print providers who remain much more bullish. One such user is ImageMark Business Services of Gastonia, N.C., a midsized offset and digital provider. Karen Kaufman, executive vice president, notes the company made a decision eight years ago to avoid having proprietary systems that would require programmers and technological updates.

Thus far, taking the SaaS route has proven beneficial. ImageMark uses SaaS products from EFI (Pace MIS), Adobe (Office 365), HP and Kodak. Kaufman says the flexibility of using cloud-based applications that speak to one another is a major plus. It helps that ImageMark also has a business continuity system in place in the event of a disaster.

This is a prime example of a company that keeps its options open. Kaufman notes that ImageMark, even though it uses a cloud-based Web-to-print service, does not keep credit card information in-house or within the SaaS. Other work at the company with protected information is channeled into a specific workflow.

“People who run operations need to peel the onion and really understand what services they’re using, and how they intersect with each other and the outside world,” she says. “Once you understand what the workflows are, what systems you’re using and what information goes into the systems that you have, then you can begin to allay the fears and make preparation for the required security service.

Banking on the Cloud

Another organization that opted to leverage cloud services is The World Bank Group, in Washington, D.C. For the 15 years prior to 2012, the shop had used a locally hosted system for managing back-end MIS on the business side, as well as production management and some automated manufacturing. In 2012, the decision was made to select cloud implementations for some of the integration points to the system.

The in-plant facility gradually made its way to the cloud, with its PTI MarcomCentral Web-to-print solution leading the way in December of 2012, followed by EFI Pace MIS in 2014. Les Barker, the shop’s senior IT officer, notes the shop is now in the process of tying both systems together. It was Barker who pitched the cloud idea to the parent organization, which uses the cloud for other services. With an eye toward reducing costs and touch points, along with the aforementioned integration points, the time was right for a change.

“The catalyst for moving over was because the technology we were using was getting a little long in the tooth,” Barker states. “Integrations were taking longer. The application environment was not utilizing some of the latest, greatest technology—it was more of a patchwork of patches, corrections and updates to keep the current system going. And there were large costs associated with it. There was down time, efficiency gains we weren’t seeing and integration points we wanted to make to other systems that could not be made easily or were too costly.

“Plus, we’d been keeping an eye on the industry. We could see the writing on the wall—you have to constantly replace servers, get more storage, bring people up-to-date on certifications. Then there’s the total cost of ownership for maintaining a system that we were using to manage an environment that was ancillary to the organization in the first place.”

Barker notes that five years ago, the thought of making the move to the cloud—with its associated costs and security concerns—would not have been well received. But the more he researched, the more he saw the efficiencies of the technologies and the speeds of the network.

One of the biggest stumbling blocks was in convincing the parent organization, by its very nature an ultra-conservative organization, that security measures and due diligence would pass muster. It helped that World Bank would have the benefit of PTI’s wealth of experience. Another plus was that the cost of going to the cloud was something of a wash ­compared to maintaining internal systems, with support, training and upgrades.

As with any technology, Barker can appreciate the reluctance that comes with taking the plunge, and managing the risk level. Barker aims to be as transparent as possible and have the services ubiquitously used. 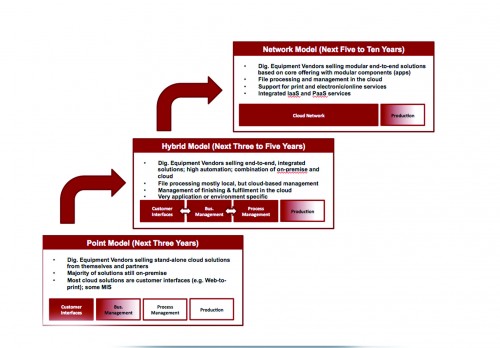 Much of what the in-plant prints is for public use and not highly confidential, but the parent company was still concerned about security, logins, where the data sits, how it is transported, how repudiation is handled and which company does the auditing, among other concerns. Regardless of the application, World Bank follows a process and needs to know the fine print of data as it flows from enterprise, to the cloud, then back to enterprise.

Presentation and thoroughness, it stands to reason, will aid the process when pitching it to a parent company. “If you lay this information out in a very structured, logical fashion, explaining the business rationale and the benefits—investment and ROI—to the internal organization, people seem to fall in line more easily than they did two years ago,” Barker says.

What about the future of cloud usage in the printing industry? In InfoTrends’ June 2015 report, “cloud-based Automation for Digital Printing,” the evolution is anticipated to evolve from the current Point Model of customer-facing interfaces (W2P, MIS) to a Hybrid Model, an end-to-end integrated solution where most file processing occurs locally, but workflow management is cloud-based.

The Network Model phase, which is expected to occur during the next 10 years, has been envisioned by InfoTrends as incorporating more IaaS and PaaS components. During this stage, customers will have the ability to add workflow components as needed to a core offering. File processing and workflow management will be handled in the cloud, and InfoTrends expects IT and software to resemble a managed service. Obviously, variables such as vendor development will dictate how the Network Model unwinds.

“Further out, we’ll see more of a Network Model—a very modular, end-to-end solution with a core backbone or infrastructure,” McAbee notes.
While it is clear that cloud services will become more and more prevalent, the less certain aspect is how quickly printers, and their customers, will allow it to happen.